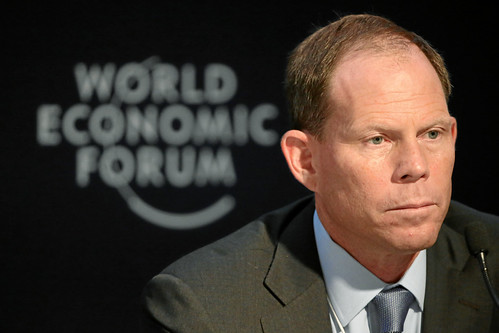 Since becoming CEO, Suzman has led the Gates Foundation’s $1.75 billion investment into creating and distributing effective COVID-19 vaccines for the developing world, claiming that life cannot go back to normal until everyone in the world has the opportunity to receive a vaccine. [2] Suzman has criticized right-of-center policies in relation to the pandemic, including the Trump administration’s decisions to cut global aid funding for the World Health Organization (WHO) and to guarantee that the government would purchase vaccines ahead of their development. [3] [4]

Suzman attended Harvard University for his bachelor’s degree before receiving a doctorate in international relations from Oxford University as a Rhodes Scholar. After graduation, Suzman returned to South Africa to pursue a career in journalism, writing for the Johannesburg Star and the Financial Times on welfare reform, international trade, and political events, including Mandela’s 1994 election. [6]

In 2000, Suzman pivoted in his career, going to work for the United Nations (UN). There, Suzman worked under then-Secretary-General Kofi Annan to implement the Millennium Development Goals, an international antipoverty agenda. Suzman worked at the UN until 2007, during which time he held several positions, including senior advisor for policy and strategic communications in the Office of the Secretary General and policy director in the Office of the Administrator of the United Nations Development Programme (UNDP). [7]

The Bill and Melinda Gates Foundation

In 2007, Suzman joined the Bill and Melinda Gates Foundation as director of global development policy, advocacy, and special initiatives. Before becoming CEO of the Gates Foundation, Suzman worked in a variety of roles, overseeing the development of Foundation programs and offices abroad and managing the Foundation’s partnerships with governments, philanthropists, and civil society organizations. [8]

In December 2019, former Foundation CEO Sue Desmond-Hellmann stepped down from the position, and Bill and Melinda Gates appointed Suzman to take her place in February 2020. [9] As CEO, Suzman set initial goals to build public confidence in the Foundation, focus on achieving quantifiable initiative results, and target gender inequities around the world. [10] [11]

Suzman cited gender equality as one of his primary priorities, claiming that progress depends upon promoting gender equality. [12] Suzman has advocated especially for the increased education of women and girls, arguing that female literacy reduces child marriages, improves health, and lowers teenage birth rates. [13] Suzman has also argued for increased economic freedom for women, supporting initiatives to provide women with baking services and business loans that encourage them to open their own businesses, especially in agriculture. [14] According to Suzman, promoting female economic independence is critical to the United Nations Sustainable Development Goals, which include goals to reduce poverty by half and double agricultural productivity. [15]

Suzman took over as CEO of the Gates Foundation immediately before the onset of the COVID-19 pandemic, and during his time as CEO, Suzman has targeted nearly all the organization’s resources on developing a COVID-19 vaccine. Suzman has argued, “We cannot defeat this pandemic unless everyone, everywhere, has a chance to get vaccinated.” [16]

Between March and April of 2020, Suzman led the Gates Foundation to commit $250 million in initial funding to support the fight against COVID-19. The original funds were earmarked to increase research into preventative measures and treatments for COVID-19, in addition to increasing the availability of medical supplies. [17] That May, Suzman called on the United States to join leaders of European and Asian nations in pledging $8 billion to the World Health Organization to fight COVID-19. [18] Suzman also oversaw efforts to create the COVID-19 Therapeutics Accelerator in search of a vaccine and treatment options for COVID-19 and encouraged the mass manufacturing of the vaccine to reach all seven billion people in the world. [19]

Suzman has opposed right-of-center policies in the past, encouraging global cooperation in support of development goals. Suzman has claimed that Brexit and former President Donald Trump’s withdrawal from the Paris Climate Accords mark a trend of isolationism that threatens global partnerships and financial giving to solve world health problems. Suzman has further argued that decreased government aid for global health organizations is posing life-threatening challenges to global health. [22]

In 2020, Suzman congratulated Congress for not supporting then-President Trump’s cuts to global aid funding, while opposing President Trump’s decision to withhold funding from the WHO. [23] Suzman has also called on the World Bank to pause African debt obligations, of which the United States is the largest shareholder. [24]

Suzman has criticized any attempts to build bilateral agreements surrounding COVID-19, instead demanding that states fund the WHO-led COVAX program to provide vaccines to developing nations. Suzman also criticized countries such as the United States for buying COVID-19 vaccines in advance, arguing for an “equitable” distribution program that prioritizes developing countries. [25] [26]