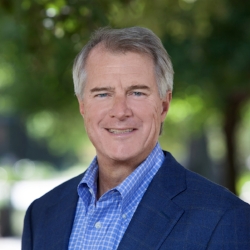 Mark A. Stevens is a billionaire venture capitalist and left-of-center philanthropist based in Menlo Park, California. Stevens currently works as managing partner at S-Cubed Capital, a venture capital firm he founded with his personal fortune that invests in startups. Prior to founding S-Cubed Capital, Stevens worked as a partner at Sequoia Capital. During his time at Sequoia, the firm invested in technology companies including Apple and Google, growing its fund to become one of the largest venture capital firms in the United States. [1]

Stevens sits on a variety of philanthropic boards and has made several charitable contributions, including a gift totaling over $100 million to the University of Southern California (USC), Stevens’s alma mater. [2] Much of Stevens’s recent career in venture capitalism, particularly his enduring involvement at Sequoia Capital, focused on environment, social, and governance investing, an investment approach that promotes left-of-center corporate policy. [3]

Stevens began his career in sales at the Hughes Aircraft Company before moving into a sales position at Intel. Stevens joined Sequoia Capital in 1989 as an associate and became a partner at the firm in 1993.

Stevens currently sits on the corporate boards of Nvidia, Quantenna, Innovium, and Second Spectrum. He also sits on the board of trustees at USC and the board of the United States Olympic Committee Foundation. [5]

Stevens owns an 8% stake in the Golden State Warriors, a team in the National Basketball Association (NBA). In 2019, Stevens made national news when game officials threw Stevens out of an NBA Finals game after he pushed and taunted Toronto Raptors player Kyle Lowry. In response, the NBA fined Stevens $500,000 and banned Stevens from all NBA and Warriors activities for one year. [6]

Stevens and his family support a variety of non-profits in the San Francisco Bay Area. Most notably, Stevens has given over $100 million to USC and the USC Stevens Center for Innovation is named after him. [8]

Mark and his wife Mary Stevens have also signed the Giving Pledge, an initiative led by Warren Buffett and Bill and Melinda Gates that commits billionaires to donating the majority of their wealth in their lifetimes. [9]

Stevens has also provided philanthropic support for organizations including:[10]