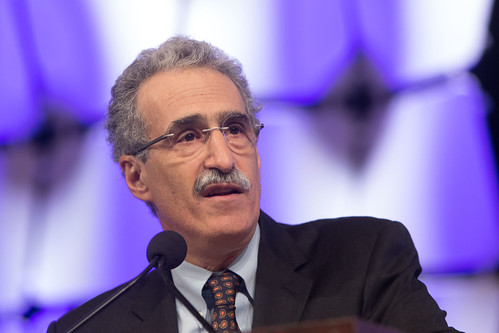 Mark Dimondstein is a labor union activist who currently sits as president of the American Postal Workers’ Union (APWU). Dimondstein is a noted left-of-center activist who has repeatedly criticized Trump administration-aligned Postmaster General Louis DeJoy. Prior to DeJoy’s appointment, Dimondstein urged U.S. Senator Bernie Sanders (D-VT) to block two Republican appointees to the Postal Board of Governors in 2015. Dimondstein is a vocal opponent of privatized postal services, forming the Grand Alliance to Save Our Public Postal Service to prevent reform. The Alliance is made up of various labor unions and left-of-center activist organizations such as Greenpeace, Sierra Club, and Rainbow PUSH Coalition. [1]

Dimondstein also supports the Black Lives Matter movement and encouraged APWU employees to participate in protests related to the death of George Floyd. [2]

Before his election, Dimondstein was president of the APWU Greater Greensboro Area Local from 1986 to 1998. In 2000, Dimondstein was appointed APWU national league field organizer. Dimondstein also worked on the Greensboro Human Relations Committee for six years. Dimondstein has used his connection to the labor community to advocate for a broader left-of-center agenda, co-founding the Greensboro chapter of Jobs With Justice and working as a coordinator with Labor Against War. [3]  He is married to labor activist Melissa Dimondstein. [4]

Dimondstein became president of APWU in November of 2013 after running on a platform that focused on increasing APWU activism, suggesting that the union should build alliances with the Occupy Wall Street movement and other civil rights groups. During his campaign, Dimondstein sued APWU, alleging that it refused to provide him with union member email addresses in advance of the election. [5] Dimondstein also misrepresented his opponent, Cliff Duffey, claiming that he had supported the elimination of Saturday mail delivery to cut costs, despite the fact that Duffey had repeatedly spoken out against the measure. [6]

In July of 2014, Dimondstein led a vote calling for then-Postmaster General Patrick Donahoe to resign, later filing charges with the National Labor Relations Board over an alleged breach in cybersecurity involving its teleworkers. [7] Donahoe, who had drawn fire from Dimondstein and APWU for limiting postal services at underused branches to cut costs, resigned in November of 2014 after 39 years with the United States Postal Service. [8]

In 2014, Dimondstein criticized office supply company Staples for its decision to utilize Staples employees to provide private supply shipping services. Dimondstein alleged that the pilot program was siphoning off union jobs and accused Staples of privatizing federal postal work. In July of that year, Staples became a “approved shipper” for USPS, FedEx, and United Parcel Service (UPS), but Dimondstein referred to the change as a “ruse” because Staples would still be allowed to control a majority of shipping in-house. [9] Dimondstein also led APWU in opposing Staples’s 2015 attempted merger with Office Depot, publishing white papers, launching a letter-writing campaign, announcing a boycott, and meeting with the Federal Trade Commission (FTC) in an attempt to prevent the merger. The FTC eventually blocked the merger, and the Staples shipping program ended in 2017 after three years of protests. [10]

In April of 2015, Dimondstein organized a protest in front of the White House, presenting over 500,000 signatures and demanding that then-President Barack Obama sign an executive order to require corporations doing business with the federal government to reveal all political donations. During a speech at this rally, Dimondstein specifically demanded records from UPS, FedEx, and Pitney Bowes. [11]

On July 1, 2020, Dimondstein testified before the congressional Committee on House Administration on Voting Rights and Election Administration on the subject of mail-in voting, claiming that there is “ virtually an absence of increased voter fraud.” He then said that successful nationwide mail-in voting would require an emergency infusion of at least $25 billion into the postal system, which would otherwise “run out of cash” in fiscal year 2020. [12]

Dimondstein also participated in a remote Our Revolution conference, calling for protests against Postmaster General Louis DeJoy’s proposed changes to the United States Postal Service and accusing him of interfering with the 2020 election. [13] In response to these accusations, DeJoy suspended any changes to postal service until after the 2020 election “to avoid even the appearance of any impact on election mail.” [14]

Postal Board of Governors Appointment Blockade

In 2015, Dimondstein urged Sen. Sanders to block the appointment of former Republican Governors James Miller III and Mickey Barnett to the U.S. Postal Service Board of Governors. In APWU’s press release endorsing Sen. Sanders’s 2016 presidential run, Dimondstein referred to Miller as “king of postal privatizers.”  Miller had already served on the board from 2003 to 2011, sitting as chairman of the board from 2005-2008. Both belonged to a set of five nominees picked by then-President Obama to replace outgoing Board members. In response, Sen. Mitch McConnell (R-KY) blocked voting on the three remaining Democratic candidates.