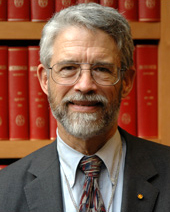 Official portrait of the Director of the Office of Science and Technology Policy John Holdren. (link)

John P. Holdren is a physicist who co-authored a textbook that commented on the advisability of compulsory abortion as a response to global population growth.[1] He was appointed by President Barack Obama in 2009 to serve as Director of the White House Office of Science and Technology Policy (OSTP), a position he held through the entire Obama administration.[2] Holdren is notable for aggressive advocacy for environmentalist positions, especially on population control and climate change. [3]

Prior to that, he accumulated about four decades of experience in scientific research and advising on the policy implications of scientific developments – particularly regarding nuclear weapons, energy and environmental issues. [4]  Holdren’s career includes connections at various times to different foundations and non-profits.

Starting early in his career, Holdren was active on matters connected to nuclear disarmament and energy policy. From 1973 to 1997, he served in various capacities with the Pugwash Conferences on Science and World Affairs, a nuclear disarmament organization. [5] When Pugwash received the Nobel Peace Prize in 1995, Holdren delivered an acceptance speech on the organization’s behalf.[6]

Overlapping this period, from 1973 to 1996, Holdren co-led the Energy and Resources Group at the University of California, Berkeley, an interdisciplinary center fusing the study of scientific and international security issues.[7]

From 1996 to 2009, Holdren led another interdisciplinary initiative – the Belfer Center’s Science, Technology and Public Policy Program at Harvard University’s Kennedy School of Government.[8]

In 2009, then-President Barack Obama nominated Holdren, a staunch environmentalist, to serve as OSTP Director. Holdren worked to advance President Obama’s science priority agenda, which Holdren summarized in a 2017 White House exit memo as including: increasing the proportion of the federal bureaucracy associated with science policy advice; increasing the federal funds budgeted for research and development support; supporting the Paris Accords on climate change; and preparing NASA for an eventual mission to the planet Mars.[9]

Holdren has expressed extreme environmentalist viewpoints and collaborated professionally with Malthusian environmental scientist and author of The Population Bomb Paul Ehrlich. In 1973, Holdren and Ehrlich wrote that policies should be implemented to “de-develop the United States.”[10] Holdren also collaborated with Ehrlich in setting the stakes of the famed Simon-Ehrlich Wager against libertarian economist Julian Simon, in which Ehrlich (in consultation with Holdren) incorrectly predicted increased scarcity of five mineral resources.[11]

Following the announcement that Holdren would be joining the White House, controversial statements published in a 1977 textbook co-authored by Holdren, Paul Ehrlich, and Anne Ehrlich came to light.[12] The textbook, entitled Ecoscience: Population, Resources, Environment, included discussion of instituting a “Planetary Regime” to “control the development, administration, conservation and distribution of all natural resources”; it also included a reference to how “compulsory abortion” could address too-rapid global population growth.[13]

In response to news reports about the textbook, Holdren’s office claimed that Holdren did not support and never supported “coercive approaches” to population control.[14]

In the course of completing the nomination process in 2009 to become OSTP Director, Holdren disclosed his role as an unpaid informal advisor to the following foundations, during the 5 years previous to his nomination: Rockefeller Foundation; Clinton Global Initiative; Carnegie Corporation of New York; Open Society Institute; and Nand and Jeet Khemka Foundation. [15]

In addition to the above, Holdren also disclosed his membership in four environmentalist groups: the Union of Concerned Scientists, Sierra Club, Environmental Defense Fund, and Natural Resources Defense Council. [17]

Additional Connections with Foundations and Non-Profits

In 1971, the Sierra Club published a book entitled Energy: A Crisis in Power, with Holdren listed as co-author.[18]

From 1994 to 2005, Holdren was vice-chair of the tax-exempt Woods Hole Research Center’s Board of Trustees, and in 2005 he became director of the Center. [21] He continued in that role until his nomination as OSTP Director. [22]

Following the end of his role with the OSTP, Holdren resumed his connection with the Woods Hole Research Center, where at present he holds the voluntary position of senior advisor to the president. [23]

American Association for the Advancement of Science

From 2006-2007, Holdren served as president of the American Association for the Advancement of Science (AAAS), whose terms rotate every year. He then served as board chair from 2007-2008.[24]