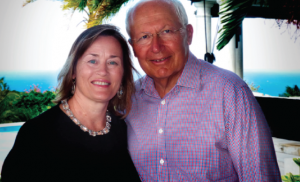 In addition to conventional left-wing activism, Dwoskin and his wife Claire are also prominent anti-vaccination activists. They sit on the board of a leading anti-vaccination organization that among other things promotes the discredited claim that vaccines cause autism. The couple’s private foundation, the Dwoskin Family Foundation, has funded organizations which promote anti-vaccine claims.[2]

Dwoskin was born in Nebraska and moved to northern Virginia in 1969.[3] He founded a company, A.J. Dwoskin and Associates, which built shopping centers, residential developments, and apartment complexes throughout the region.

Dwoskin began backing Democratic Party candidates for public office in the mid-1980s. He was a supporter of then-Governor Gerald L. Baliles (D-Virginia) and became an adviser to him. Baliles was reportedly at Dwoskin’s house in Jamaica when he developed a local-option tax surcharge transportation funding plan. Baliles would deny that Dwoskin knew about the plan during the trip.[4]

Dwoskin became a Democratic fundraiser while contributing some of his own fortune to back candidates. In the 1988 presidential election, Dwoskin backed then-Senator Al Gore (D-Tennessee) and eventual Democratic nominee Gov. Michael Dukakis (D-Massachusetts).[5]

Dwoskin then backed the candidacy of Bill Clinton and became tied into the Clinton network, forming relationships with various allies of the Clinton family. President Clinton would later appoint Dwoskin to the Securities Investor Protection Corporation.[6]

Dwoskin was a donor to the Clinton Foundation. He gave under $250,000 to the organization, according to the Foundation.[7]

Dwoskin has emerged as a critic of funding the self-styled “Resistance,” left-wing activists opposed to President Donald Trump. Dwoskin has argued that some of the groups involved have turned off major liberal donors with their policy and rhetorical extremism.[8]

After the surprise defeat of Sen. John Kerry (D-Massachusetts) in the 2004 presidential election by President George W. Bush, a group of left-wing donors including George Soros came together to form the Democracy Alliance, an umbrella group of left-wing causes and donors. Dwoskin joined the organization and reportedly served on its board of directors. The group requires its donor members to donate at least $200,000 a year to member organizations.[9]

In 2006, Dwoskin became treasurer of the September Fund, a Democratic Party 527 PAC that was set up to defeat Republicans in that year’s midterm elections. The fund was chaired by Harold Ickes, a Clinton family political aide. The group spent money on ads targeting Republican lawmakers.[10]

In 2005, Dwoskin joined the board of directors of and eventually became chairman of Catalist, formerly known as Data Warehouse. Catalist provides voter data and list services to Democratic candidates and liberal organizations. In 2012, Dwoskin stepped down from Catalist while continuing to run its state affiliates in Illinois and Virginia.[11]

Dwoskin serves on the board of J Street, a left-wing Jewish organization critical of Israeli defense policies that is seen as the counter to the Israeli-government-aligned American Israel Public Affairs Committee (AIPAC).[12] The organization has been criticized as being more interested in Left-liberal political interests than in Israeli security.[13]

Dwoskin also serves as an expert for the Institute for New Economic Thinking, a think tank created by George Soros to support his left-wing economic policy views.[14]

Dwoskin currently serves as director of the liberal-aligned ostensible watchdog organization Citizens for Responsibility and Ethics in Washington (CREW).[15]

In the 2010 midterm election cycle, Dwoskin backed the Sierra Club with a $20,000 contribution. He also gave $30,400 to the DNC. He gave an additional $30,400 to the DCCC and supported numerous Democratic congressional candidates.[17]

In the 2012 elections, he only gave $5,000 to the DCCC. He did not donate to President Obama’s reelection campaign. Nor did he donate to the party. Instead, he donated largely to the Virginia Democratic Party and individual left-wing candidates.[18]

In the 2014 midterm elections, he was a donor to the Ready for Hillary PAC that supported Hillary Clinton’s anticipated bid for president. He also gave $25,000 to the Virginia Progress PAC. Meanwhile, he continued to support individual candidates.[21]

In the 2016 elections, he supported Hillary Clinton giving her $2,700. He also was a big donor to the Real Estate Roundtable Political Action Committee (REALPAC) giving the group $10,000. He again supported numerous Democratic congressional candidates.[22]

Dwoskin serves on the board of Children’s Medical Safety Research Institute (CMSRI), an anti-vaccination organization. The organization funded two studies by Anthony Mawson that purported to show that vaccines caused autism; both studies have since been discredited and retracted by the publications that published them. Dwoskin also helped fund an anti-vaccine conference in Jamaica in 2011 and his wife compared vaccines to the Holocaust.[24] Dwoskin’s foundation, the Dwoskin Family Foundation, has provided substantial funding to CMSRI and other anti-vaccination organizations, including the National Vaccine Information Center.[25]

Dwoskin has been accused of duplicity in his relations to illegal immigrants. In 2010, he created a day laborer center in Centreville, Virginia, behind one of his shopping centers, an action seen as supporting legally suspect immigration. The center was funded by Dwoskin and run by a local nonprofit, the Centreville Immigration Forum.[26] In 2016, Dwoskin was sued by illegal immigrants and their families after his company allegedly evicted them for not providing proof of legal status.[27]