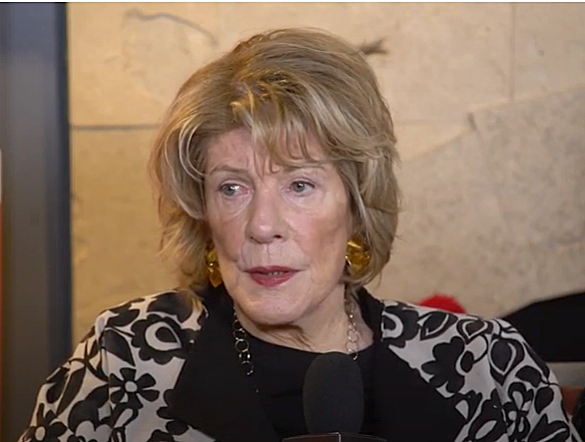 Agnes Gund is an heiress and philanthropist known for her work as a patron of the arts and as a funder of left-of-center causes. She is the chair of the left-of-center organization Art for Justice Fund, which works to release inmates and works to reduce prison sentences.

Agnes Gund was born in 1938 and grew up in the suburbs of Cleveland, Ohio. She was the second of six children. Her father was a banker and a one-time Hollywood stuntman. He also collected Western art. Her mother would take her and the rest of the children to the Cleveland Museum of Art for Saturday drawing classes. Gund has said that she was “never any good at drawing” but that she learned to love the collection. [3]

Gund lost her mother at the age of 14 after a long battle with leukemia. [4]

She began to collect art pieces in her late twenties after the death of her father, when she inherited his art collection. [5] In 1976, Gund joined the board of the New York City Museum of Modern Art. In 1978, she went to Harvard to get a master’s degree in art history. [6] In 1991, she was appointed president of the Museum of Modern Art and she served in that role until 2002. [7]

In the 1980s, Gund began championing gay people’s interests and funded research into AIDS. [9] Gund is also a champion of left-progressive women’s causes and other causes that could be called feminist, although she herself does not accept the label. She also funds pro-abortion organizations. [10]

In 2020, her daughter Catherine Gund made a documentary film about her mother’s life called “Aggie.” [11]

After she watched the 2016 documentary film 13th by Ava DuVernay, Gund sold Roy Liechtenstein’s Masterpiece for $165 million and used the money to seed the Art for Justice Fund. The organization was founded by Gund in partnership with the Ford Foundation and Rockefeller Philanthropy Advisors. [12]

The fund works on left-of-center efforts for criminal justice reform and releasing criminals from prison. It also supports artists in prison. [13]

Gund’s giving vehicle is the AG Foundation, which was founded in 1988. It is funded through the sale of art works from her collection. [14]

In 2019, the AG Foundation gave over $26 million in grants to various organizations. While most of the giving is to organizations related to the arts, it does make donations to left-of-center organizations such as the Brady Center to Prevent Gun Violence and Planned Parenthood Federation of America. [15]