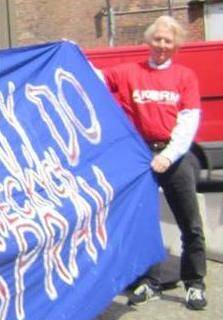 Wade Rathke is a professional political organizer, labor union activist, and co-founder of the now-defunct Association for Community Organizations for Reform Now (ACORN), a controversial, left-of-center community organizing group. Rathke also worked as ACORN’s chief organizer from 1970 to its closure in 2008.

Aside from his work with ACORN, Rathke co-founded Service Employees International Union (SEIU) Local 100 in New Orleans, Louisiana in 1980 and worked as the chapter’s chief organizer. Rathke was also secretary-treasurer for the AFL-CIO of Greater New Orleans and a member of the SEIU’s International Executive Board at various times. [1]

Wade Rathke is the brother of the late Dale Rathke, a political activist who embezzled close to $1 million from ACORN between 1999 and 2000. The scandal contributed to ACORN’s eventual bankruptcy and closure. [2] [3]

In the 1960s, Rathke worked as a student activist for the left-wing Students for a Democratic Society (SDS). [4] After graduation, Rathke joined the National Welfare Rights Organization, a Massachusetts-based activist organization that promoted a left-of-center social welfare agenda until its closure in 1975. [5]

In 1970, Rathke went to Arkansas and founded the organizational network that eventually became ACORN. Prior to its closure in 2008, ACORN advocated for a range of left-of-center policies, including requiring banks to reinvest in their communities, raising the minimum wage substantially, and implementing environmentalist policies. [6] Much of ACORN’s advocacy focused on increasing the minimum wage, partnering with the left-of-center Living Wage Resource Center under Rathke’s leadership. [7]

$948,607 from ACORN’s charitable funds. Rathke and other top ACORN leadership covered up the embezzlement for nearly a decade, allowing Dale Rathke to remain on ACORN’s payroll without informing the organization’s board or the general public of the embezzlement. ACORN only revealed the indiscretion when a whistle-blower spread news of the embezzlement to several of ACORN’s largest donors. [9]

When the scandal broke, Wade Rathke admitted that his family had signed an agreement with ACORN to repay the amount his brother had embezzled through $30,000 annual installments in exchange for confidentiality. Rathke claimed that the cover-up was not to protect his brother, but to protect ACORN from attacks from opponent organizations. In 2008, Rathke stepped down from ACORN but remained in a position at ACORN International. [10]

While working as chief organizer of ACORN, Rathke founded several other left-wing organizations, primarily related to labor organizations. In 1980, Rathke convinced the United Labor Organizations to change its name to United Labor Unions in order to promote greater formal unionization. [11]

In 1980, Rathke organized a group of Hyatt Hotels Corporation employees to form a labor union. The union became the Local 100 chapter of the controversial, left-wing Service Employees International Union (SEIU) in 1984. [12] SEIU Local 100 operates in Louisiana, Texas, and Arkansas with Rathke formerly working as its chief organizer. [13]

In 2000, Rathke founded and chaired the Organizers’ Forum, a left-of-center organization that promotes dialogue among labor unions and community political activists to share political tactics. The Forum is a project of the left-of-center Tides Center, of which Rathke previously sat as chairman of the board. Rathke has also sat on the board of the Tides Foundation, the charitable arm of the Tides Center. [15]

Rathke worked for three terms as the secretary-treasurer of the Greater New Orleans AFL-CIO. Rathke has been heavily involved with the SEIU, having sat as president and co-founder of the SEIU Southern Conference and a as member of the SEIU International Executive Board. Within SEIU, Rathke has also worked as chief organizer of the Hotel and Restaurant Organizing Committee. [16]

In 2004, Rathke became the director of the Centre for Community Leadership, a group that works to promote left-of-center policy in Canada. [17]

Media Rathke is the publisher and editor-in-chief of Social Policy, a liberal quarterly magazine. He also writes for the left-of-center New Labor Forum. [18]

Rathke has written several books to promote his own left-of-center advocacy, including Citizen Wealth: Winning the Campaign to Save Working Families and The Battle for the 9th Ward: ACORN and the Rebuilding of New Orleans. Aside from full-length books, Rathke has contributed chapters to There is No Such Thing as a Natural Disaster, a book on Hurricane Katrina, and Wal-Mart: The Face of Twenty-First-Century Capitalism. Rathke also edited a compilation of essays on left-of-center activism entitled Global Grassroots. [19] [20]

Rathke has also contributed articles to The Nation, a left-of-center magazine. [21]