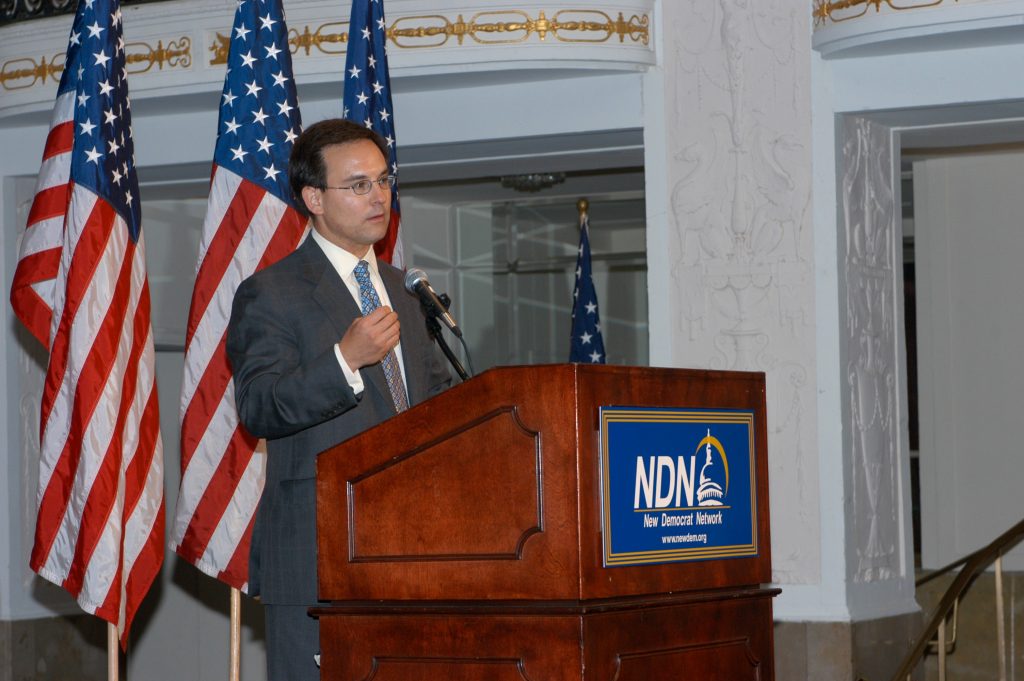 Simon Rosenberg is a left-of-center political operative and the founder and president of New Democrat Network and the New Policy Institute, a liberal think tank and advocacy group based in Washington, D.C. His political career includes work on Democratic presidential campaigns and various political consulting positions, including an unsuccessful run for Chair of the Democratic National Committee. [1]

The New Democrat Network, founded in 1996, evolved into the NDN and the New Policy Institute in 2004. It is self-described as non-partisan but liberal. The website includes a blog titled “Simon’s Notes on 2020” for which Rosenberg publishes a weekly analysis of Democratic presidential campaigns and the general political pulse. [2] The blog is openly liberal; Rosenberg called President Donald Trump a serial lawbreaker in one posting. [3]

Rosenberg lives in Washington, D.C. with his three children and wife, Caitlin Durkovich, an Obama administration appointee to the Department of Homeland Security. Durkovich worked at the DHS as the assistant secretary for infrastructure protection. Earlier in her career, she worked for U.S. Representative Dave McCurdy (D-OK) and has held multiple cybersecurity-related positions. [4] In her post-DHS capacity she testified before Congress regarding the vulnerabilities of major electric grid platforms. She argued that current defense properties were outdated and did not meet the standards necessary to deter or overcome modern threat levels. [5]

Rosenberg’s political career began on the Michael Dukakis campaign in 1988. He joined Dukakis after a short period with ABC News in New York. After Dukakis lost, Rosenberg returned to New York briefly before joining the Bill Clinton for President campaign.

In 2005, Rosenberg ran for chairman of the Democratic National Committee. While party leadership wanted Terry McAuliffe to remain chairman, other influencers pushed for new leadership of the DNC. Rosenberg ran until dropping from the race in February 2005, and subsequently endorsed Howard Dean who was elected DNC chairman days later. [10]

Rosenberg made headlines after an impassioned dialogue with Fox News’ Melissa Francis ended with Rosenberg telling Francis that he’s never coming back on her show. In the November 2017 interview, Rosenberg and Francis were discussing the proposed Tax Cuts and Jobs Act. Tensions escalated with Francis accusing Rosenberg of repeating himself without answering her question, and Rosenberg becoming flustered with Francis interrupting him. The segment ended with Francis telling Rosenberg that they should grab a drink sometime instead of fighting so much. Rosenberg, who arguably didn’t know they were still live, replied by telling Francis he will never come back on her show before disconnecting his lapel mic. [11]

Rosenberg has spoken highly of left-wing presidential candidate U.S. Sen. Bernie Sanders (I-Vermont), saying that he has exposed a discontent mindset in Democratic constituents who believe the political system does not work for everyone, and that these constituents want a responsible economic foundation that they believe Sanders will offer. [12] Even still, Rosenberg routinely posts or reposts positive ads or comments about multiple 2020 Democratic presidential candidates on his Twitter. [13]

Disinformation has been a talking point with Rosenberg throughout multiple campaigns. He worked to counter disinformation in the Democratic Congressional Campaign Committee during the 2018 midterms, and has called on 2020 presidential candidates to agree to a non-aggression pact. Rosenberg argued that such a pact would make it easier to identify foreign manipulation into national elections. [14]

Rosenberg has been unsurprisingly critical of President Donald Trump. In a 2018 op-ed with NBC, Rosenberg described the Trump administration’s immigration policy as xenophobic and suggested that family separations, or “kids in cages,” as he put it, was a measure Trump took that exposed his fear of his immigration policies failing. [15]

In a 2019 tweet, Rosenberg criticized Trump’s leadership and suggested Trump was pandering towards Fox News. [16]