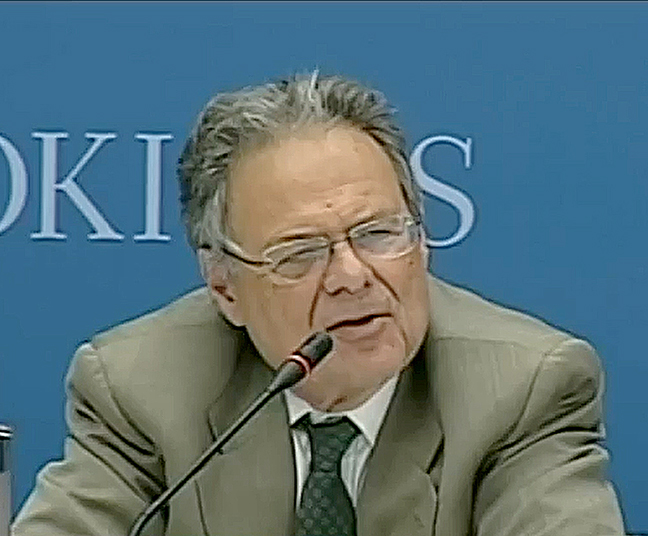 Morton Halperin is an activist and political advisor who has worked for the Nixon, Johnson, and Clinton administrations. He sits on the board of directors for ONE Action, is the chair emeritus for J Street, was a senior fellow at the Center for American Progress, and has been a senior fellow in Foreign Policy Studies of the Brookings Institution, a senior associate of the Carnegie Endowment for International Peace, and senior vice president of the left-of-center think tank Century Foundation. [1] [2]

Halperin also worked as the director of the Center for National Security Studies at the American Civil Liberties Union (ACLU) and as a director of U.S. Advocacy for the Open Society Foundations. [3] [4]

Morton Halperin received a B.A. from Columbia College in 1958 and a Ph.D. in International Relations from Yale University in 1961. He was an assistant professor of government and a research associate at the Center for International Affairs at Harvard University in the early 1960s. Halperin also taught as a visiting professor at universities across the United States including the Massachusetts Institute of Technology, Johns Hopkins University, Yale, and Columbia University. [5]

After leaving Harvard in 1966, Halperin became the deputy assistant secretary at the International Security Affairs sector of the Department of Defense until 1969. After leaving the Defense Department, he became a senior staff member of the White House National Security Council where he was responsible for national security planning. [6]

Halperin was a senior fellow in Foreign Policy Studies of the Brookings Institution from September 1969 to December 1973. He was also a senior associate of the Carnegie Endowment for International Peace from November 1992 to February 1994, a senior fellow of the Council on Foreign Relations from March 1996 to November 1998, and senior vice president of the left-of-center think tank Century Foundation. [9]

Halperin was also director of U.S. Advocacy for the Open Society Foundations (OSF), formerly known as the Open Society Institute. OSF is a private grantmaking foundation created and funded by billionaire financier and liberal philanthropist George Soros and is the main hub of a Soros-funded network of more than 20 national and regional foundations, making it one of the largest political philanthropies in the world. Built on Soros’ left-wing redistributionist political philosophy, OSF gives away nearly a billion dollars per year to left-wing organizations around the world to advance Soros’ vision of an “open society.” Halperin works as a senior advisor to OSF and was also named as a lobbyist for the Open Society Policy Center, the lobbying group associated with the Open Society Network and the Open Society Foundations. [12] [13] [14] [15]

Halperin serves on the board of directors for ONE Action, a lobbying organization associated with the ONE Campaign that advocates for international anti-poverty policies. He is also the chair emeritus for J Street, a left-of-center lobbying organization focused on American-Israeli relations that conservative foreign policy experts have accused of undermining the state of Israel. [16] [17] [18]