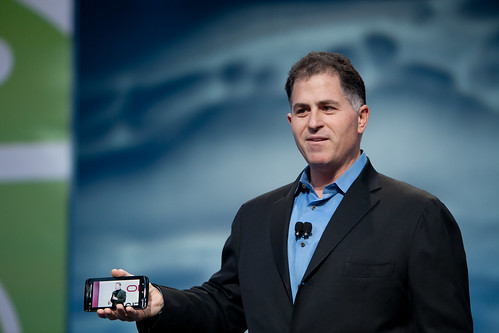 Michael Dell is an American businessman and philanthropist, known primarily as the founder, chairman, and CEO of Dell Technologies. Dell Technologies is one of the largest IT companies in the world and provides services to multinational corporations, small businesses, governments, and consumers. As of September 2021, Michael Dell was ranked the 25th richest person in the world by Bloomberg Billionaires Index, possessing a net worth of $50.7 billion. [1]

Dell and his wife Susan operate the Michael & Susan Dell Foundation, a major grantmaking organization that funds educational causes among other issues in the United States, India, and South Africa. [2]

Michael Dell was born on February 23, 1965, in Houston, Texas. He attended the University of Texas as a pre-med student. Dell founded Dell Technologies in 1984 when he was 19 years old. At that time, Dell Technologies was a small company operating out of his freshman dorm, specializing in personal computer and component upgrades for both students and older customers. By 1992, Michael Dell transformed his company into a major corporation and became a Fortune 500 CEO, the youngest such CEO at the time. [3] [4]

In 1998 Dell established MSD Capital, a private investment firm that exclusively manages the wealth he accrued for the benefit of his family. [5]

In 2004, Dell stepped down from Dell Technologies only to return to the CEO position in 2007 due to shrinking sales and an accounting scandal. [6]

In 2010, Michael Dell agreed to personally pay $4 million and Dell Technologies agreed to pay $100 million after the SEC filed a complaint that the corporation, Dell, former CEO Kevin Rollins, and former CFO James Schneider engaged in fraud by misrepresenting their ability to hit and exceed earning targets. The SEC complaint claimed that Dell was only able to reach these targets due to undisclosed payments from Intel Corporation. Intel was paying Dell to not use processors from its rival company in Dell computers. Rollins also paid $4 million, and Schneider agreed to pay $3 million to settle the charges. [7]

Dell made the company private in 2013. In October 2015, he agreed to buy EMC Corp. for $67 billion, the largest technology acquisition on record. Dell Technologies was put back on the New York Stock Exchange in 2018. [8]

In 1999, Dell and his wife Susan started the Michael & Susan Dell Foundation, a philanthropic organization that initially focused on providing opportunities to impoverished children living in the U.S., South Africa, and India. [9] As of 2010, the Dell Foundation had donated more than $650 million to such causes as funding schools, healthcare services, regional economic stability, and community initiatives. [10]

In 2010, the Foundation endorsed then-first lady Michelle Obama’s campaign to end childhood obesity. “We welcome Mrs. Obama’s efforts and look forward to working with her and others to help our kids be healthier,” its statement read. Earlier that year, Susan Dell released a book on health advice for mothers entitled Be Well: Messages from Moms on Living Healthier Lives. It was published by the Dell Foundation and the Alliance for a Healthier Generation, a partnership of the American Heart Association and the Clinton Foundation. [11]

In 2016, the Dell Foundation launched the Dell Medical School at the University of Texas at Austin. [12]

In addition to his business and philanthropy, Dell holds positions with educational and non-governmental organizations. He is an honorary member of the Foundation Board of the World Economic Forum (WEC), an executive committee member of the International Business Council, as well as a member of the Technology CEO Council and the Business Roundtable. [13]

He is an advisory board member for Tsinghua University’s School of Economics and Management in Beijing, and he sits on the governing board of the Indian School of Business in Hyderabad, India. He is a board member of Catalyst, a nonprofit organization which works with international companies to advocate for women in leadership positions. [14]

In April 2020, Texas Governor Greg Abbott (R) appointed Dell to the “Strike Force to Open Texas,” an initiative to find “safe and effective” ways to reopen the state during the COVID-19 pandemic. [16]