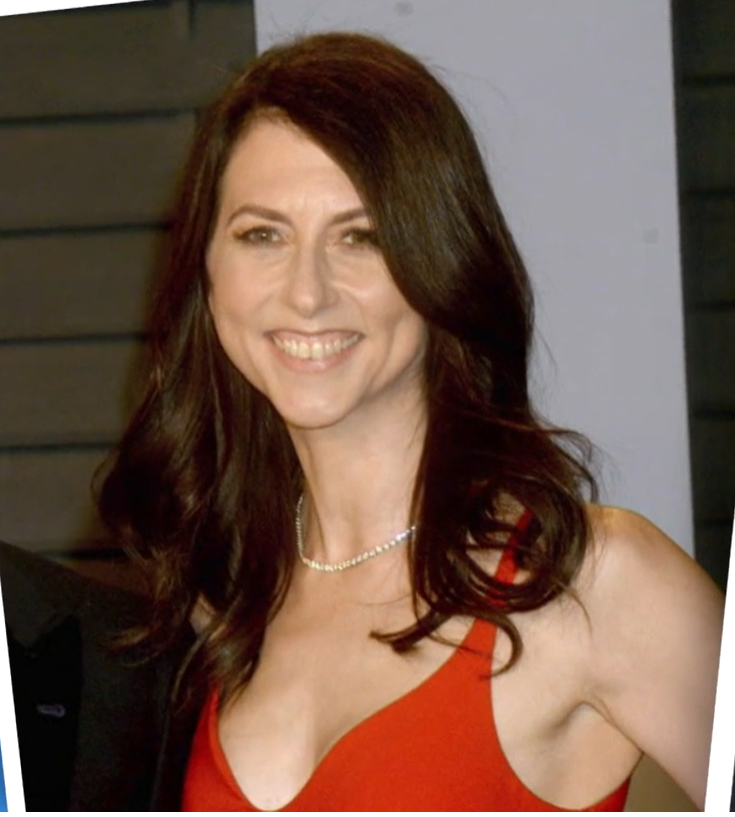 MacKenzie Bezos (also known by her maiden name, MacKenzie Scott) is the ex-wife of Amazon founder Jeff Bezos and is recognized as the third-wealthiest woman in the world after a divorce settlement that left her with an estimated $37 billion. [1]

She is the founder and executive director of the anti-bullying advocacy group Bystander Revolution.

Mackenzie Bezos is the third-wealthiest woman in the world and the ex-wife of Amazon founder and CEO Jeff Bezos. [2]

MacKenzie was reportedly supportive of Bezos decision to begin Amazon as an e-commerce site in 1994. She helped created Amazon’s first business plan and was Amazon’s first accountant. [3]

The two have three sons and one adopted daughter. [4]

While at Princeton University, MacKenzie Tuttle was a student and later research assistant for Nobel-prize winning novelist Toni Morrison. Morrison called her “one of the best students I’ve ever had in my creative writing classes.” [5]

To pay the bills while pursuing a writing career, Tuttle worked as an administrative assistant at the financial firm D.E. Shaw. While there, she met Jeff Bezos, who was the firm’s youngest vice president. [6]

The two dated for three months before getting engaged and were married three months later. He was 30 and she was 23. [7]

MacKenzie Bezos helped Jeff launch Amazon, helping him brainstorming a name for the company and ship packages through UPS. She stepped back to focus on the couple’s children and her literary career. [8]

Aside from making a few public appearances with her husband during their marriage, she was not a public figure and described herself as a “bookish introvert.” She drew some attention for writing a one-star, highly negative review of The Everything Store by Brad Stone, a book critical of Amazon. [9]

In 2014, MacKenzie Bezos founded Bystander Revolution, an anti-bullying nonprofit where she serves as the executive director. [11]

After 25 years of marriage, Jeff and MacKenzie Bezos divorced in 2019. The couple issued a statement in January 2019 that said, “After a period of loving exploration and trial separation, we have decided to divorce and continue our shared lives as friends.” [12]

In the divorce settlement, MacKenzie got a 4 percent stake in Amazon, valued at about $37 billion, but gave up ownership of the other companies her husband owns, such as the Washington Post and Blue Origin. [14]

The settlement made her the third-wealthiest woman in the world, notably only ranking behind two women who had inherited most of their wealth. The only two women who are wealthier are L’Oréal heiress Francoise Bettencourt Meyers and Walmart heiress Alice Walton. [16]

Less than two months after finalizing the divorce, she announced she planned to give away at least half of her money to charity over her lifetime. She signed Warren Buffet and Bill Gates’s “Giving Pledge.” She wrote, “I have a disproportionate amount of money to share. My approach to philanthropy will continue to be thoughtful. It will take time and effort and care. But I won’t wait. And I will keep at it until the safe is empty.” [17]

The Point Foundation, an organization that provides financial aid to LGBT college students, received money from MacKenzie. According to Jorge Valencia, the chief executive officer and director of the organization, there was no application process for the donation and his organization possessed no previous connection to MacKenzie. [19]

On June 15, 2021, Mackenzie Scott announced another round of grants, totaling $2.74 billion, to 286 organizations. [20] In an article with Medium titled “Seeding by Ceding” Scott announced that she, and a team of consultants, had spent the first quarter of 2021 “identifying and evaluating equity-oriented non-profit teams working in areas that have been neglected.” [21] The consulting group that Scott worked with when identifying grant recipients was reportedly the Bridgespan Group, whose employees unexpectedly contacted grant recipients to tell them about impending grants on the condition that they would not announce the grant publicly until Scott made the final announcement. [22]

Scott did not specify how much funding each organization received but did list the names of each group. [23] It is also unclear from which entity Scott made these grants, but the New York Times reported that they suspected Scott used a donor advised fund to make the grants. [24]

One notable left-of-center organization that received a donation in this round of grants was Borealis Philanthropy. [25] Borealis Philanthropy, a philanthropic intermediary group closely tied to the Black Lives Matter movement, operates several different funds that support groups and projects advocating for left-of-center policies and causes in a number of broad social issue categories. According to Scott’s announcement, she made contributions to the Black Led Movement, Communities Transforming Policing, Disability Inclusion, Emerging LGBTQ Leaders of Color, Racial Equity in Journalism, Racial Equity in Philanthropy, Racial Equity to Accelerate Change, and Spark Justice funds. [26]

In 2021, Inside Philanthropy reported that Scott has also donated to OutRight Action International, a global consultant that promotes LGBT rights and issues worldwide with “a commitment to intersectionality and a fierce feminist lens.” [27] [28]

In June 2021, Scott and Dan Jewett donated $20 million to Children’s Defense Fund, a left-leaning organization that advocates for increased welfare and government spending on education and family issues. The donation is a part of her Giving Pledge. Scott’s donation is the single largest donation CDF has ever received, and it makes her and Jewett the second most generous donors to CDF since its founding. CDF’s vice president for strategy and program, Sheri Brady, said that “This investment will help strengthen public policy and community organizing at state and national levels through efforts like our signature CDF Freedom Schools.” CDF plans to use the funds for multi-year campaigns over the next few years leading up to its 50th Anniversary in 2023. [29]