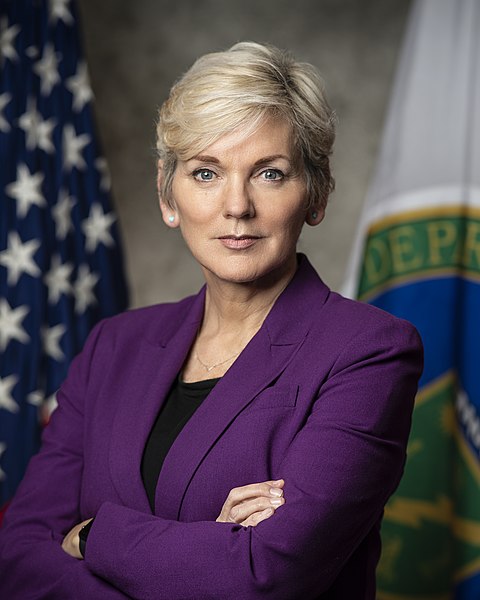 Jennifer Mulhern Granholm is the 16th U.S. Secretary of Energy and was sworn in Feb. 25, 2021.  She was the governor of Michigan from 2003 to 2011. [1] Granholm was picked by President Joe Biden to lead what a CNN headline described as a “clean energy revolution.” [2] Soon after becoming Secretary of Energy, Granholm claimed the Biden administration’s alternative energy policies would create millions of jobs. [3]

While she was governor, Michigan led the nation with the highest unemployment rate from April of 2006 through May of 2010. [4] Granholm claimed in one news release that she had turned the state into the “alternative energy capital of North America and the advanced battery capital of the world.” [5]

Many of the high-profile alternative energy projects that Granholm based those claims upon never produced the jobs projected. In one example, she took the stage in a 2010 press conference with a CEO of an alternative-energy company that the state had awarded $9.1 million in tax credits. [6]  That CEO, Richard Short, was arrested by the state police the day after his appearance at the press conference and his business was exposed as a scam. [7] Short’s daughter called him a “serial con man.” [8] Short was sentenced in 2011 to up to eight years in prison for multiple crimes. [9]

Prior to becoming governor of Michigan in January 2003, Granholm was a judicial clerk for Michigan’s Sixth Circuit Court of Appeals, a federal prosecutor in Detroit in 1990, and Michigan’s attorney general from 1999 to 2003. [10] [11]

After two terms as governor, Granholm and her husband Daniel Mulhern were hired in 2011 by the University of California, Berkeley to teach courses on energy, leadership, state budgets and the economy. [12]

Granholm was a faculty member of the U.C. Berkeley Goldman School of Public Policy in 2020 when she was nominated to lead the Department of Energy. [13]

As governor, Granholm embarked on what she referred to as a “drive to make Michigan the alternative energy capital of North America.” In a January 2009 news release she claimed Michigan had become “the most aggressive state in the nation in developing our alternative energy capabilities.” The release also quoted an estimate from the left-leaning Center for American Progress which projected that “Michigan can create more than 60,000 new jobs by investing in alternative energy.” [14]

In 2009, Granholm touted electric-car battery manufacturer A123 Systems as part of her plan to make Michigan the “the advanced battery capital of the world.” [15]

A123 Systems received $249 million in federal grants as part of President Barack Obama’s $787 billion spending bill known as the American Recovery and Reinvestment Act of 2009[16] and another $135 million in tax breaks from Michigan. [17]

The grand opening for the A123 Systems plant was highlighted by a phone call during the press conference from President Barack Obama. [18] Granholm answered the phone call that was broadcast over a loud speaker as President Obama lauded the company saying, “This is about the birth of an entire new industry in America, an industry that’s going to be central to the next generation of cars.” [19]

A123 Systems filed for bankruptcy in 2012. [20] The Chinese company Wanxiang bought A123 Systems in a bankruptcy auction. [21] Some members of Congress as well as the Strategic Materials Advisory— a group that includes retired military leaders—wanted the sale to a Chinese company blocked because of a fear that it might jeopardize U.S. energy security. [22]

In 2008 Mascoma Corporation was given $26 million from the U.S. Department of Energy and $23 million from the state of Michigan for construction of a cellulosic fuel facility. [23] The company was to convert waste paper sludge and inedible biomass into ethanol fuel. [24]

“This company and their partners will create jobs in Michigan as they develop the next generation of cellulosic ethanol that will reduce our dependence on foreign oil and make fuel more affordable for our families,” Granholm said in 2008. [25]

In 2013, a key funder for the biofuel plant pulled out and the facility was never built. [26]

In September of 2011 Mascoma was required to list its risks in a regulatory filing. Mascoma reported, “we have a limited operating history, a history of losses and the expectation of continuing losses … and we have no experience in the markets in which we intent to operate.” [27]

In 2009, Granholm attended a wind energy conference in Chicago and mentioned Global Wind Systems as part of her alternative energy agenda. [28] The wind turbine company was to build a facility in Michigan that was projected to create 807 jobs, according to a Michigan Economic Development Corporation press release. [29] The state approved a $7.3 million tax credit for Global Wind Systems. [30] The Novi facility was never built. [31]

RASCO CEO Richard Short took the stage with Granholm on March 18, 2010, when she introduced the leaders of companies that had been awarded $9.1 million in state tax credits. [32] Granholm said that Short’s company planned to invest $18.4 million in a new headquarters in Flint, Michigan. [33]

Short’s business was called “Renewable and Sustainable Companies LLC,” or RASCO, and was described by WABC-TV as an “alternative energy business.” [34]

The day after appearing with Granholm Short was arrested by the Michigan State Police on a parole violation. [35] State records revealed Short had been convicted in 2002 of embezzling money from a company. [36] Short had also defrauded a mortgage company and cashed a $73,000 check. [37] He was also accused of stealing money from an elderly woman who lived next door to him. [38] Holly Baker, Short’s daughter, called him a “serial con man” and claimed that he had at one time faked having cancer. [39] Short was living in a mobile home park[40] and never received the tax credit for RASCO.

In 2006, Granholm announced that United Solar Ovonic would build a solar cell manufacturing facility in Greenville, Michigan[41] The project was supposed to create as many as 563 jobs within five years, according to a state of Michigan press release. Granholm stated that it was “another strong anchor for Michigan’s alternative energy industry.” State and local municipalities offered a total package worth $37 million in government incentives for the project. [42] [43]

Similarly, in 2008, Granholm announced that United Solar Ovonic was going to create up to 350 new jobs and invest $220 million in a high-tech solar cell manufacturing facility in Battle Creek, Michigan. [44]

Granholm went on trade trips to Sweden in 2007 and 2010 “for her work in fostering relations between Michigan and Sweden” to promote her vision of an alternative-energy economy, according to a Michigan Economic Development Corporation press release. [46] Sweden’s King Carl XVI Gustaf awarded Granholm the Insignia of First Commander, Order of the Polar Star, in a 2010 ceremony at the Royal Palace in Stockholm. [47]

That honor came two years after Swedish Biogas opened a facility in Flint, Michigan, in 2008 to convert waste from the city’s wastewater treatment plant into bio-based energy. [48]

In 2010, Granholm announced that the Swedish company was considering opening a second plant in Reed City. “Companies like Swedish Biogas International are transforming Michigan into the clean energy capital of North America,” Granholm said.  “This is all part of our aggressive strategy to diversify the Michigan economy and expand our state’s clean energy capabilities to create jobs and in the process reduce our nation’s dependence on foreign oil.” [49]

In 2013, the Swedish Biogas facility in Flint was at a “standstill,” according to an MLive news story, as the company was creating only enough biomethane gas to offset the company’s own cost for natural gas. [50]

On Sept. 22, 2010, Granholm test drove a Ford electric van at the Azure Dynamics headquarters in Oak Park, Michigan. [53] It was one of the first Ford Transit Connect vans on the market and it had an Azure Dynamics’ hybrid electric powertrain. [54]

At the press conference, Granholm said that “Michigan is rapidly becoming a center for electric vehicle development.” [55]

In June of 2010, Granholm stated in a radio address that LG Chem had begun construction on a new battery manufacturing plant in Holland, Michigan. The plant made batteries for the Chevrolet Volt. [57] LG Chem was awarded a $151.4 million grant from the U.S. Department of Energy to build the plant. [58]

A federal audit in 2013 reported LG Chem workers—rather than working in the plant— were helping the nearby Outdoor Discovery Center by building a plastics-free playground and painting the inside of an administrative office building. LG Chem said it had furloughed workers to save money due to a lack of demand for the Chevy Volt. [59] The U.S. Department of Energy performed an audit in 2013 that found that LG Chem paid employees for watching movies and playing cards or video games. [60] The audit also faulted LG Chem for asking for federal reimbursement for $1.6 million it paid workers who had volunteered at area animal shelters, charitable groups and nature centers. [61]

In 2021, LG Chem announced it was building an additional plant with General Motors in Ohio. [62] LG Chem stated it had plans to invest $4.5 billion in the United States by 2025 as well as hire 10,000 more workers to expand its battery capacity. [63]

Granholm cited Evergreen Solar, a solar energy parts manufacturer, in a 2008 state document that stated how she was creating jobs in Michigan’s alternative energy economy. [64] Evergreen Solar filed for Chapter 11 bankruptcy protection in August of 2011. [65]

In February 2021, shortly after becoming Secretary of Energy, Granholm projected that the energy policy of the Biden administration would create “millions of jobs” in the alternative energy sector and more than offset jobs lost as a result of the proposed transition away from conventional sources of energy. [66] She also claimed the administration’s policies would become a “job creator for every corner of the nation.” [67]

As Michigan’s governor, Granholm made similar claims about the state’s economy, according to a document her office put out in 2008. [68]

Detroit Free Press editor Brian Dickerson wrote there “was an unprecedented hemorrhage of manufacturing jobs” while Granholm was governor from 2003-2011. [69]

A month before Granholm took office in January of 2003, there were 4.47 million people working in the state of Michigan. By December 2010, Granholm’s final month in office, Michigan had 3.89 million payroll jobs – 573,900 fewer than eight years earlier, according to the U.S. Bureau of Labor Statistics. [70]

In April of 2006, Michigan attained the nation’s highest unemployment rate and held that position for the next 49 months, until May of 2010. [71]

Granholm attributed the job losses to the auto industry. “The job losses in Michigan, because of our concentration on manufacturing and automotive, began in the year 2000 and have not let up,” Granholm said in 2010. [72]

Chrysler filed for bankruptcy on April 30, 2009, with $39.9 billion in assets, and announced a partnership with the car company Fiat. [73] Chrysler received an $4 billion loan from the federal government. [74]

General Motors declared bankruptcy and filed for Chapter 11 protection on June 1, 2009. [75] GM had $89 billion in assets[76] and made the decision to file for bankruptcy as part of an agreement to receive a $19 billion federal government loan. [77]

There were claims made in May of 2021 of a conflict of interest involving President Biden’s alternative energy agenda and Granholm serving as Secretary of Energy. [78] President Biden took a virtual tour of Proterra, an electric vehicle technology manufacturer, and praised the CEO and the employees. [79] Granholm held millions of dollars in stock options in Proterra and once served on the board. [80]

Vice President Kamala Harris toured a partner of Proterra[81] that CNN reported was a bus company “whose main supplier of electric vehicles is also Proterra.” [82] CNN reported the visits created a “thorny conflict of interest” for Granholm, who was positioned to “gain a windfall” from her stock options in Proterra. [83] The CNN report noted there were hundreds of companies in the U.S. that are involved in the electric vehicle business that could have been visited besides ones with connections to Granholm. [84]

Yale Law School corporate and securities law professor Jonathan Macey told CNN that such a visit from the President of the United States was “like money in the bank” for anyone holding a financial interest in the company. [85] [86]

In an ethics agreement she signed when she joined the Biden administration Granholm pledged to divest her stock options in Proterra within 180 days of her February 2021 confirmation. Proterra’s public offering was scheduled to occur within the first six months of 2021. [87]