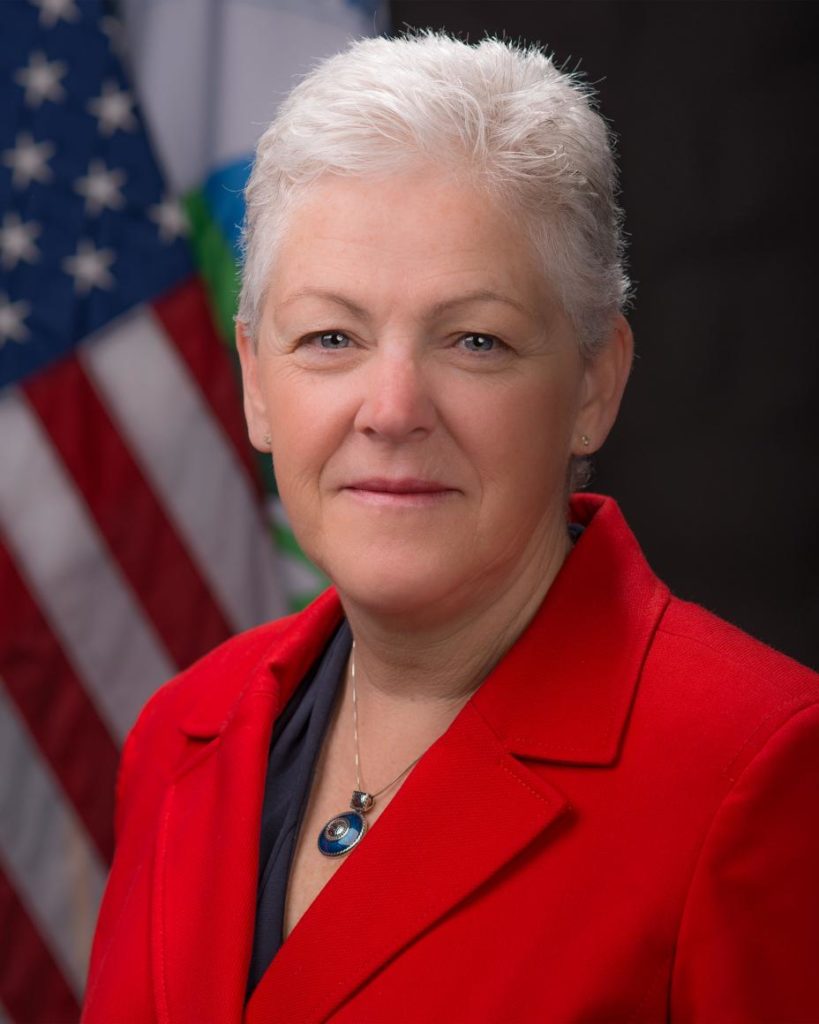 Gina McCarthy is a Democratic environmentalist bureaucrat who serves as the White House National Climate Advisor under President Joe Biden and was the former Administrator of the Environmental Protection Agency under President Barack Obama.

McCarthy is a lifelong environmental bureaucrat who has worked in a variety of positions at the local, state, and federal levels. She first entered the federal government by working in the U.S. Environmental Protection Agency (EPA) and took over the agency in 2013 under former President Barack Obama. [1]

Throughout her tenure, then-Administrator McCarthy worked to expand the EPA’s role with moderate success. She left office upon the commencement of the Trump administration, and many of the regulations imposed during her tenure were reversed. After spending four years advising an investment fund, working at Harvard University, and briefly running the Natural Resources Defense Council (NRDC), McCarthy returned to the federal government at the commencement of the Biden administration. [2]

In 1980, Gina McCarthy began her career as a government health agent in Canton, Massachusetts. In 1984, she began working for the board of health in neighboring Stoughton, Massachusetts and was eventually appointed the town’s first environmental officer. [3]

In 1985, then-Governor Michael Dukakis (D-MA) appointed McCarthy as a member of a state hazardous waste safety council. In 1999,McCarthy was appointed the undersecretary of environmental affairs in Massachusetts. In 2003, she became deputy advisor of the office of development. McCarthy went on to work under five Massachusetts governors, including current U.S. Senator Mitt Romney (R-UT). [4][5]

In 2004, McCarthy moved to Connecticut and worked as commissioner of the Connecticut Department of Environmental Protection. [6] In Connecticut, McCarthy played a key role in creating the Regional Greenhouse Gas Initiative, a state-level, cap-and-trade gas emissions restriction plan involving several Northeast and Mid-Atlantic states. [7]

In 2009, McCarthy became an assistant administrator at the U.S. Environmental Protection Agency (EPA). In 2013, she was nominated to become EPA Administrator by then-President Barack Obama. [8] Due to opposition to the nomination in the U.S. Senate, it took McCarthy more than five months to be confirmed to the position, which left the EPA without a confirmed leader for the longest timeframe in its history. [9]

In May 2015, then-Administrator McCarthy finalized the EPA’s Clean Water Rule under the Clean Water Act. The rule expanded the legislation’s parameters to permit discretionary federal oversight of streams and wetlands, as opposed to just rivers and lakes. In response, thirteen states sued the federal government. Advisor McCarthy partially bypassed the lawsuits by implementing the rule in the 37 other states. [10] In October 2015, in a separate lawsuit, a court struck down the Clean Water Rule, and the ruling was applied nationwide. Congressional Republicans attempted to cement the victory by passing legislation permanently restricting the Clean Water Act, but President Obama vetoed the bill. [11]

In June 2015, Advisor McCarthy finalized the Clean Power Rule under the Clean Air Act to restrict emissions in accordance with the Paris Accords with the goal of cutting emissions by 17% from 2005 through 2020. Congressional Republicans claimed the rule would damage the economy, destroy the coal industry, and required the approval of Congress before being implemented. In February 2016, the U.S. Supreme Court declared the regulation unconstitutional. [12][13]

In September 2015, U.S. Representative Paul Gosar (R-AZ) and other congressional Republicans proposed a resolution to impeach Advisor McCarthy. The Republicans accused Advisor McCarthy of committing perjury during multiple hearings by lying about the parameters of the Clean Water Rule. Allegedly, then-Administrator McCarthy purposefully misled Congress by downplaying the EPA’s discretionary expansion of the rule. Ultimately, Advisor McCarthy was not impeached. [14] The measure did not advance.

In August 2015, Advisor McCarthy apologized for the EPA’s slow response to the spillage of 3 million gallons of contaminated water from a mine into the Animas River in Colorado. The spill turned the river yellow and contaminated local water supplies. [15]

After the election of President Donald Trump, Scott Pruitt replaced McCarthy as Administrator of the EPA. Advisor McCarthy reportedly told EPA employees to “keep your asses in your seats” and wait for the end of the Trump administration to resume her left-of-center policies. [19] She also stated she was “disappointed” in former President Trump’s victory, and later lamented that Administrator Pruitt’s EPA was attempting to destroy her legacy. Under the Trump administration, the EPA reversed dozens of Advisor McCarthy’s regulations. [20]

In 2017, Advisor McCarthy entered the private sector for the first time to work as an advisor for Pegasus Capital Advisors, an investment fund certified as a “Green Climate Fund” which invests in companies that combat the impact of climate change. [21]

In 2018, Advisor McCarthy also began working at Harvard University as a professor of the practice of public health in the Department of Environmental Health. She also became the director and board chair of the newly established Center for Climate, Health, and the Global Environment, which formulates environmentalist policies and designs environmentalist communication strategies. [22]

In January 2020, Advisor McCarthy left Harvard to become the president and CEO of the controversial Natural Resources Defense Council (NRDC), a position which she held for less than a year. [23][24] Her reportable compensation at the NRDC from 2020-2021 was $856,171.[25]

On December 18, 2020, McCarthy was designated as White House National Climate Advisor by then-President-elect Joe Biden. The position does not require Senate confirmation. The role was newly created by President Biden, though Carol Brewer held a similar position between 2009 and 2011 under President Obama until the position was defunded. [26] [27]

In her new role, McCarthy is tasked with coordinating numerous government agencies – including the EPA, the U.S. Department of Health and Human Services (HHS), the Department of Transportation (DOT), the Department of the Treasury, and the National Economic Council – to implement the Biden administration’s climate policy. [28][29]

McCarthy did not give any political contributions until 2020. That year, she gave $500 to then-presidential candidate Joe Biden, then-U.S. Senate candidates Jon Ossoff (D-GA) and Raphael Warnock (D-GA), and the left-of-center Georgia Senate Victory Fund. [30]