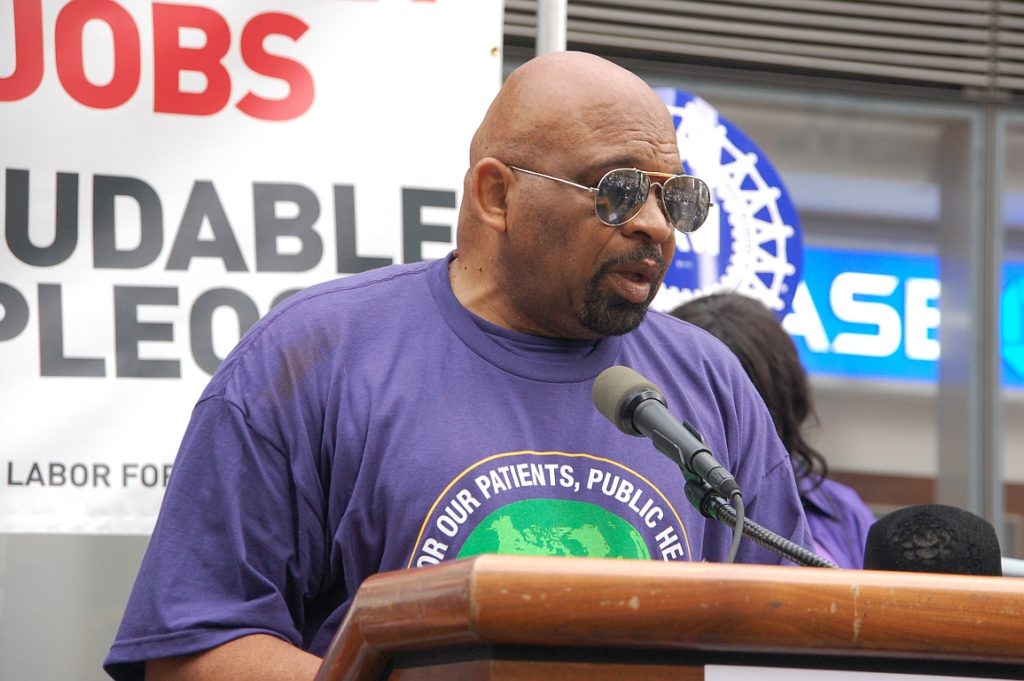 George Gresham is president of the New York-based 1199 SEIU United Healthcare Workers East, a position he has held since 2007. It is the largest union in the city with over 300,000 members. He also serves as an executive vice president for the national Service Employees International Union (SEIU).

Gresham has a long career in labor unionism and left-wing politics; his father was a Teamsters union activist and Gresham spent 32 years in 1199 SEIU as a member and officer before taking office.[1] He is also a member of the executive board of the national Service Employees International Union (SEIU) as a result of his position in 1199SEIU.

Gresham’s position as 1199SEIU president has made him a prominent figure in New York politics. In addition to serving on Mayor de Blasio’s transition team, Gresham has given a speech to the Women’s March protest of the Trump administration[2] and served on the host committee for New York City’s unsuccessful bid to host the 2016 Democratic National Convention.[3]

Gresham was born in 1955 in Virginia to a family of domestic workers. His father was a butler and chauffeur and his mother was a maid. His grandparents were sharecroppers. He lived in Virginia and attended segregated schools until he and his family moved to New York when he was 8.[4] His father later became a truck driver and an activist with the Teamsters Union.[5]

In 1988, Gresham, who had worked as a hospital janitor, became a full-time paid organizer for Drug, Hospital, and Health Care Employees Union Local 1199 (which would later merge into 1199SEIU) after 13 years of membership. He rose through the officials’ ranks, becoming vice president, executive vice president, and secretary-treasurer working under the union’s longtime boss Dennis Rivera. [6]

Gresham was elected union president in 2007. He was unopposed and was seen as carrying on Rivera’s policies after Rivera stepped down to take a leadership role in the national SEIU.[7]

Gresham has led 1199SEIU into being a major player in New York’s left-wing politics. In 2011, Gresham joined various left-wing activists and union officials at a march led by Al Sharpton and his National Action Network in Washington D.C. [8]

In 2013, Gresham and his union endorsed left-wing Public Advocacte Bill de Blasio (D) for mayor of New York City. De Blasio was elected mayor, and he selected Gresham to be a part of his transition team.[9]

In 2015, Gresham and his union endorsed Obama administration Secretary of State Hillary Clinton for president over self-described “democratic socialist” U.S. Senator Bernie Sanders of Vermont. 1199SEIU followed the national SEIU’s earlier decision to endorse Clinton, ostensibly because the unions believed that Clinton had a better strategy for winning the general election.[10]

Also in 2015, he served as the grand marshal of the New York City Labor Day parade.[11]

In September 2015, he wrote an op-ed for the New York Daily News calling for a “bolder” labor union movement. “It is also becoming clear that — with the increasing attacks on the rights of women, communities of color and immigrants — social and economic justice are inextricably linked.” wrote Gresham. He called for labor unions to work with activists from Black Lives Matter, transgender rights activists, immigrant-rights activists, and other left-wing activists.[12]

In 2017 after the inauguration of President Donald Trump, Gresham was one of the few men who spoke at the Women’s March in Washington, D.C. He says he was motivated to speak to the march about left-wing healthcare policy.[13]

Also in 2017, he co-authored an op-ed with radical environmentalist leader Bill McKibben of 350.org calling for more action to fight climate change. The two men told the story of a woman and her husband who survived Hurricane Sandy. They then implied that the burning of fossil fuels was making hurricanes stronger. [14]Later that year, he wrote an op-ed sent out to his members arguing for a government-controlled healthcare program under the euphemism “Medicare for All.” Among the countries his column praised was communist Cuba.[15]