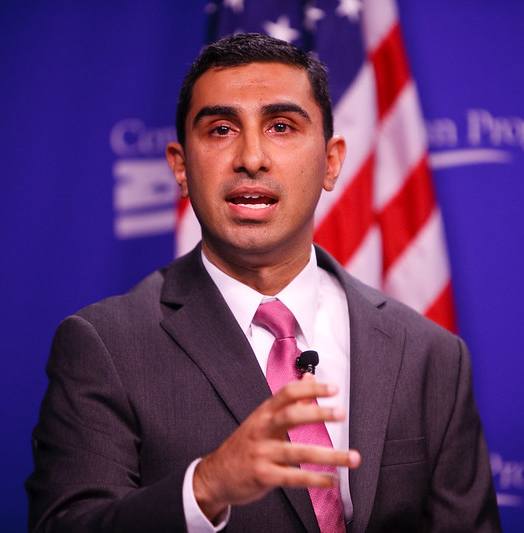 Faiz Shakir is a Democratic political operative and left-progressive organizer who is the campaign manager for the 2020 Presidential Campaign of U.S. Senator Bernie Sanders (I-VT). Shakir is among the most influential political operatives on the left, having held high ranking positions with the American Civil Liberties Union (ACLU), former Senate Democratic Leader Harry Reid (D-NV), and Speaker of the House Nancy Pelosi (D-CA). After the 2016 presidential election, Shakir led protests through the ACLU opposing the immigration policies of President Donald Trump.

Shakir is a practicing Muslim and has been called “the most powerful” Muslim in Democratic politics. [1]

Shakir was born and raised in Florida to Pakistani immigrant parents. He attended Harvard University as an undergraduate and gravitated towards progressive organizing. While a student at Harvard in 2000, Shalkir was co-chair of “Islam Awareness Week”; part of the event which Shakir denied attending, raised money for the Holy Land Foundation, a group later shut down by the federal government for sending money to Hamas. The event caused many to criticize Shakir later in his career. [2]

After college, Shakir worked as a junior researcher for then U.S. Senator John Kerry’s Presidential campaign, where he was involved in the response to Republican criticism of Kerry’s war record. Shakir also worked as a legislative aide to former U.S. Senator Bob Graham (D-FL) on the Senate Veterans Affairs Committee, and in the communications department at the Obama administration’s White House Office of National Drug Control Policy. [3]

Shakir gained notoriety in the progressive movement as a writer for ThinkProgress, the publication and news arm of the large left-leaning think tank the Center for American Progress. Shakir joined ThinkProgress in 2005, eventually becoming editor-in-chief. [4]

Shakir then served under Senate Democratic Leader Harry Reid as a senior advisor, and was credited with moving Reid’s policy positions further to the left in order to appeal more to the Democratic base in his final term in the Senate. [6] Shakir handled policy, communications, and outreach for key Democratic constituency groups for Reid. [7]

Following Reid’s retirement from the Senate, Shakir joined the American Civil Liberties Union as national political director. Shakir helped push the ACLU into a left-of-center mobilization powerhouse in opposition to the immigration policies of the Trump administration. [8]

Shakir informally advised U.S. Senator Bernie Sanders’ (I-VT) campaign for President in 2016; while working on Capitol Hill, Shakir was chided in emails from John Podesta released by WikiLeaks for advising the Sanders Campaign in 2016. [9]