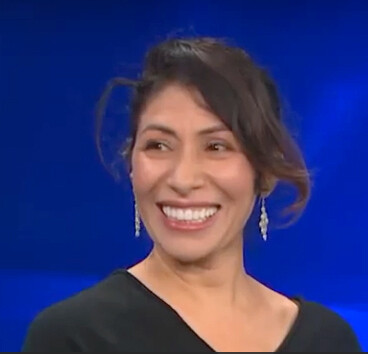 Emiliana Guereca is the founder of Women’s March LA, a Los Angeles-based organization named for a rally she organized in 2017 to protest the inauguration of President Donald Trump. She is the executive director of the non-profit Women’s March Los Angeles Foundation and of the political action committee Women’s March Action.

Guereca is the seventh child out of 13 in a family of Mexican immigrants to the United States. She grew up in Chicago and was the first in her family to attend college, starting at Chicago’s DePaul University and then transferring to UCLA. [2] After working several years in music production in the Los Angeles area, in 2003 Guereca founded EZ Event Production. The company manages events through the Los Angeles area including the Brentwood Art Festival, Balboa Strawberry Festival, Latin Salsa Festival, and Oktoberfest DTLA. [3]

Guereca claims that prior to founding Women’s March LA, she was “not really political.” [4] However, campaign finance disclosures show that she contributed to both Obama for America and California Democratic candidates and organizations prior to 2016. [5]

Guereca set up a non-profit organization, Women’s March LA Foundation, after the 2016 election of President Donald Trump, to organize a protest march the day after Trump’s inauguration. In the original leadership group for the Women’s March LA were co-executive director Deena Katz, producer of the television shows “Dancing With the Stars,” “Real Time with Bill Maher,” and “Whose Line Is It Anyway?,” who is associated with the gun control organization March for Our Lives; Ellen Scherer Crafts, a television and documentary producer; and Hanieh Jodat, an Iranian-American actress. [6]

Women’s March LA Foundation and Guereca have had repeated conflicts with Women’s March, Inc., the national organization founded by Palestinian activist Linda Sarsour and others, which organized a march in Washington, D.C. in 2017 and subsequent years. In 2017, Sarsour’s organization filed for trademark protection for the phrase “Women’s March,” saying that a national organization could provide a unified voice for women’s marches opposing Trump. Guereca and other leaders of local women’s marches opposed the application, saying that local organizations were independent of Sarsour’s organization, and sought to block the approval in federal court. “I didn’t want to be caught in the middle of this, paying attorneys fees and fighting with lawsuits,” Guereca told the Washington Post. “I don’t want to spend my time on that. I want to spend my time pushing for a feminist agenda. But we wanted a fair process.” Sarsour’s organization dropped the trademark application in April 2019. [10]

In the run-up to the 2019 Women’s March, partner organizations began dropping their sponsorship of the Sarsour-organized march in Washington, D.C. because of allegations of misuse of funds and anti-Semitism by march organizers. Critics charged that the national organization tolerated anti-Semites, pointing to organizer Tamika Mallory’s ties to Nation of Islam head Louis Farrakhan. [11] In addition, Jewish press outlets reported that Mallory and fellow organizer Carmen Perez had allegedly asserted at an organizing meeting in November 2016 that Jewish people bore collective responsibility as exploiters of blacks and were leaders of the American slave trade—statements drawn from a discredited book by the Nation of Islam, The Secret Relationship Between Blacks and Jews. [12]

Eventually, more than 300 organizations would sever ties with the national organization, including the Democratic National Committee, and speakers such as former Secretary of State Hillary Clinton, Senator Kamala Harris (D-CA), and Senator Kirsten Gillibrand (D-NY) would withdraw their speaking acceptances. [13] Guereca posted a message disclaiming any connection between Sarsour’s organization and Women’s March LA, but admitted that donations to her organization had dropped by more than 60 percent because of the controversy. [14]