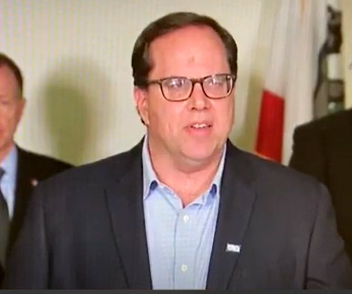 Alex Caputo-Pearl is the former president, and current vice president, of the United Teachers of Los Angeles (UTLA) union and a vice president of the American Federation of Teachers (AFT). He is an outspoken opponent of charter schools and other education reform measures.

Caputo-Pearl has always been seen as a more radical and militant teachers’ union leader. He was one of the leading members of the Progressive Educators for Action (PEAC) caucus within the UTLA.

He has a reputation for pushing teachers’ unions to champion other left-wing causes in addition their usual advocacy.

Caputo-Pearl is a loud critic of charter schools and other alternatives to the traditional unionized government-run school system. He condemned the 2010 film Waiting for Superman, which critiqued the traditional model. [1]

He also has stated that unions should become “social justice unions.”.[2] In a 2011 op-ed, Caputo-Pearl and a PEAC colleague attacked “privatization”, “institutionally racist urban policies”, and budget cuts that they saw as pushing students out of school. They identified their goals as fighting for full funding for schools and social services, creating schools that teach and represent social justice, and supporting the improvement of teachers and teaching in a pro-union environment.[3] Caputo-Pearl also sought greater tax increases and cuts in correctional spending.[4]

In 2012, Caputo-Pearl was profiled as an education reformer at Crenshaw High School, which was one of the worst performing high schools in Los Angeles. The reform program, which was part of something called the Extended Learning Cultural Model, was called “explicitly political” and it taught students to be “advocates” for their community. Among the programs created was the Crenshaw Social Justice and Law Academy, which was discontinued in 2013.[5] [6]

In 2013, Caputo-Pearl announced his bid for UTLA president. In his announcement email, he attacked “privatization,” “running schools like businesses,” and student testing. He assembled a ticket called Union Power, which ran on a platform supporting increased funding for schools, increased pay for teachers, and union participation in other left-wing causes.[9]

In 2014, Caputo-Pearl and his Union Power slate were elected to lead UTLA.[10]

In 2016, he reached out to his members and encouraged them to support a $19 monthly increase in member dues. He also became more confrontational with charter schools and the school district. The union also became more visible in the media and launched a member recruitment campaign at schools.[12]

Also in 2016, Caputo-Pearl outlined an aggressive agenda that would prepare UTLA to strike in 2018. He called for a media campaign to promote the union’s ideas, an increase in property taxes, opposition to charter schools, and preparation for school board elections the following year. He also called for more members to donate to the union’s PAC.[13] UTLA also jointly affiliated with the American Federation of Teachers and the National Education Association (NEA). [14]

The union also announced plans to organize all over California. Caputo-Pearl was joined by Karen Lewis, the president of the Chicago Teachers Union and an idol of union activists favoring a more militant approach. It sent a signal that UTLA was going to become more militant.[15]

Caputo left office as UTLA president at the end of 2019 but remained a vice president. Caputo was succeeded by Cecily Myart-Cruz. [19]

In 2018, Caputo-Pearl signed a statement in support of Black Lives Matter in school week.[20] He also began laying the foundation for a possible strike later in the year over a new contract.[21] The strike action was inspired by other teacher strikes across the country.[22]

Caputo-Pearl denounced the 2018 U.S. Supreme Court’s ruling in Janus v. AFSCME, which forbade government worker unions from forcing dissident non-members of the union to pay union fees. He used it as an opportunity to attack the school board and its “pro-privatization leadership” for the “unregulated growth of charter schools.”[23]