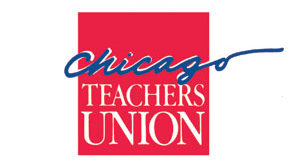 This is a logo for Chicago Teachers Union. (link)

The Chicago Teachers Union (CTU) is the teachers’ union for 25,000 teachers, paraprofessionals, and other public school employees in the Chicago, Illinois public school system, the third-largest school system in the United States. The CTU represents its members through collective bargaining for compensation, benefits, employee work conditions, and school governance. [1]

Founded in 1937, CTU is well known for its aggressive political engagement such as strikes, marches, and protests in favor of left-of-center educational priorities and approaches to racial equality. [2] In the 2010s and early 2020s, the CTU has aligned with the ideological radical left; in 2019,the union faced criticism after representatives including a union executive board member traveled to Venezuela in support of the de facto socialist dictatorship of Nicolas Maduro. [3]

CTU is a local union of the American Federation of Teachers, the country’s second-largest national teachers’ union.

The Chicago Teachers Union was established to represent the interest of teachers at Chicago, Illinois schools. The CTU represents Chicago area teachers in regular collective bargaining contract agreements. While the CTU mission is, ostensibly, to improve public education, most of the identified purposes of the CTU are related to improving compensation and protecting the job security of union members, as well as growing the union. Item 6 on the CTU mission expresses a purpose of enlarging the CTU by incorporating charter school educators, as well as “other Chicago-area educators that may join with this Union.” In 2018, the CTU was successful in adding the 1,000 members of the Chicago Alliance of Charter Teachers and Staff to a division within the CTU, though other charter school teacher labor unions remained independent of the CTU. [4] The CTU Constitution also identifies solidarity with other labor unions (“a relationship of mutual assistance and cooperation with organized labor”) as a core purpose of the CTU. [5]

In the 2019 negotiation with Chicago, the CTU’s key negotiating goals were the duration of the contract, increased support staff (including elimination of privatized nurses), reduced class sizes, increased compensation and benefits, and job security protections, including limiting some teacher evaluations and Principal authority over grading practices. [6]

The Chicago Teacher Federation (CTF), a predecessor to the Chicago Teachers Union, was formed in 1897, largely to improve the status and compensation of teachers. Under famous union leader Margaret Haley (known as the “Lady Labor Slugger”), the CTF recognized that it needed to persuade political officials to achieve these goals. The Chicago Teacher Federation threw itself into political advocacy, organizing behind candidates who were favorable to their goals. This effort resulted in both support and opposition. In 1915, the newly elected Mayor of Chicago, William Thompson, appointed a school board that was largely hostile to the interests of the Chicago Teacher Federation. Under Board President Jacob Loeb, the Chicago Board of Education passed a rule (“The Loeb Rule”) prohibiting teachers from joining any labor union or similar organization. The Federation challenged this rule in court, with mixed results. [8]

After the Chicago Teachers Union achieved the power to collectively bargain, CTU teachers went on strike nine times in twenty years, with four strikes in the first seven years. [14] After a strike in 1987, there was a period of relative peace, with no teacher strikes until 2012.

However, in 2012, after 9 months of contentious negotiations between CTU, the Chicago School Board, and then-Chicago Mayor Rahm Emanuel (D), who had been actively closing or privatizing failing schools, the CTU went on strike again. [15] The 2012 strike also proved difficult for President Barack Obama during that year’s presidential campaign; it pitted labor unions, whose support he needed, against Emanuel, Obama’s former White House Chief of Staff and a top fundraiser. While interest groups on all sides sought Obama’s involvement in the negotiation, President Obama’s spokesman said that Obama “has not expressed any opinion or made any assessment about this particular incident.” [16]

In 2018, CTU supported the first major strike by charter school teachers in US history. [17]

In 2019, CTU launched an 11-day teacher strike, the eleventh since 1969. The results were mixed for CTU. While Chicago officials did not give them everything they demanded, the city did agree to a 16% raise over five years, smaller class sizes and more support staff, including social workers, nurses, librarians, and others. While a victory for the teachers’ union, the concessions came at a significant cost – estimated at about $500 million – to Chicago’s already-shaky financial condition. In 2020, the city was running an $838 million budget deficit, and Chicago’s school system bonds have been rated below investment-grade in recent years. [18]

In addition to member-oriented benefits, the CTU also expanded its list of demands during the 2019 teacher strike to include a broader political goal: access to affordable housing. Illinois law limits what unions can include as part of a contract negotiation. However, a growing movement of labor organizations has begun aggressively campaigning for radical-left economic policy under the branding “bargaining for the common good,” including intersectional policy efforts in labor negotiations. [19] Ultimately, when the 11-day strike ended, the city of Chicago declined to incorporate housing policy into the contract with CTU. [20]

In May 2020, the Chicago Teachers Union was sued by a Chicago teacher who was being forced to pay CTU dues despite crossing the picket line during the 2019 strike and withdrawing from CTU membership. The teacher alleged that she was being forced to subsidize CTU’s speech, and this was a violation of her own first amendment rights. In response, CTU blamed a “Koch-funded law project,” called the lawsuit “anti-worker,” and argued that, by only allowing members to revoke their dues authorizations in August, they were operating “within the letter of the law.” [22]

The Foundation was founded in 1969 when it received the Fewkes Tower – a 29-story high rise building in Chicago – from the Chicago Teachers Union, which had built the tower in 1963 to provide affordable housing to retired teachers. While the purpose of the Foundation was to support retired and disabled teachers, very few teachers ever lived at Fewkes Tower, and “only seven of the 224 apartments in Fewkes Tower were occupied by retired CPS teachers” when the building was sold by CTUF in 2014. [25] Upon the sale of the tower, the CTUF refocused its mission towards teacher advocacy and grantmaking to underserved communities. [26]

In 2019, CTUF grantees included a mix of progressive activist organizations and community charity organizations like the Action Now Institute, Equip for Equality, Grassroots Collaborative, Rainbows for All Children, and the UIC Institute for Research on Race and Public Policy. [28]

The Chicago Teachers Union also operates the CTU PAC, a campaign committee that supports candidates who fight against school reform. [29] [30] In 2015, donations to the CTU PAC amounted to over $1.5 million, and the CTU PAC spent hundreds of thousands of dollars in support of Cook County Commissioner Jesus Garcia (D), who ran against incumbent Mayor Rahm Emanuel (D). Garcia lost. [31]

Between March 2018 and July 2019, just prior to the 2019 teachers strike, the Chicago Teachers Union spent almost $1.5 million on political activities. In addition, CTU PAC donated $1.2 million to candidates and political organizations. [32]

CTU and CTU PAC paid $316,000 to United Working Families, a labor-union-aligned political organization funded by CTU and SEIU Healthcare Illinois/Indiana, to conduct organizing and advocacy in line with the policies and candidates supported by the Chicago Teachers Union. [34]

Between October 2018 and October 2019, the CTU donated $1.7 million to political campaigns and related political action committees. Included in that spending was $300,000 to Cook County Board President Toni Preckwinkle (D) for her Mayoral campaign. Preckwinkle lost to Lori Lightfoot (D). [35]

CTU has been an active opponent of education reforms or changes that could reduce the union’s power within the education system. Despite Chicago Public School enrollment dropping by over 6,000 students in 2019, and by 80,000 students since 2000, the Chicago Teachers Union has refused to allow schools, even failing schools, to close. [37] In 2012, contract negotiations stalled over Mayor Emanuel’s proposal to use student test scores in teacher evaluations, as well as his effort to give principals more hiring authority. [38]

The Chicago Teachers Union is led by CTU President Jesse Sharkey, who was appointed to the position in 2018. Sharkey has been with the CTU since 1998, previously serving as the union’s vice president. Prior to working on staff at CTU, Sharkey was a social studies teacher and a political activist. [39]  The World Socialist Web Site has called Sharkey “a leading member of the International Socialist Organization.” [40] Sharkey lives in a $1.5 million home, and sends his own children to magnet and selective enrollment schools. [41]

The CTU Vice President is Stacy Davis Gates, who is also executive vice president of the Illinois Federation of Teachers and the Chairwoman of the United Working Families political organization. Previously, Gates served as the Political and Legislative Director for CTU. [42]