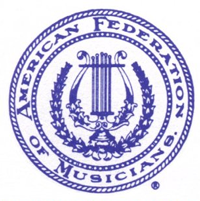 The American Federation of Musicians (AFM) is a labor union affiliated with the AFL-CIO labor union federation which represents professional musicians in the United States and Canada. [1]  AFM first organized in 1896 in Indianapolis, Indiana and has grown to just over 73,000 members. [2]

In 1942, American Federation of Musicians organized a two-year recording strike when radio programs began using recordings of orchestras instead of live musicians. [3] The strike, which was criticized for depriving the world of early recordings by jazz greats Charlie Parker and Dizzy Gillespie, resulted in recording companies paying royalties not to the musicians directly but to the union. [4] AFM claims most orchestral musicians in America and Canada to its membership, with major symphony orchestras delegating representatives to vote on union negotiations. [5]

Ray Hair, president of AFM since 2010, is a member of the Labor Advisory Committee for U.S. Trade Negotiations and Trade Policy. [6]

In December of 2011, Hair released a video criticizing Lionsgate Films and the Hunger Games film franchise for using the prestigious London Symphony Orchestra to score its soundtrack. Hair suggested that this was a way of getting around paying AFM union royalties and fees. [7]

TEMPO (Taskforce for Employment of Musicians Promotional Organization) is a project to provide support for political candidates who will support (among other aims) greater National Endowment for the Arts funding, changes for travel regulations involving the transport of instruments, and stricter copyright laws. Due to federal regulations, this project is funded by donations given directly from musicians, not from AFM’s “general treasury” funded by dues. [11] In the 2020 cycle, all AFM federal political committee contributions as of mid-August 2020 had gone to Democratic candidates. [12]

Fair Trade Music is an initiative to bring more members, directly or indirectly, into collaboration with the AFM. To become a Fair Trade Music chapter, an organization must agree to “contact and involve” a local AFM and designate an individual to represent that organization on the AFM International Board. Members also must agree to use Fair Trade Music graphics and messaging and “encourage the use of signed agreements based on national templates that guarantee musicians no less than local community standards.” This program is open to non-members of the AFM. [13]

AFM is a supporter of the Butch Lewis Act, which allows for sponsors of multiemployer pension plans that apply for financial assistance loans under the Employee Retirement Income Security Act of 1974 to also apply for loans from the Pension Benefit Guaranty Corporation if the first loan will not stave off insolvency of the pension within 30 years. [14] AFM seeks pressure from its members to gain Senate support of this legislation, which passed the House of Representatives in July 2019, to buttress its own struggling pension fund, the AFM-Employer’s Pension Fund. [15]

AFM opposes the Local Radio Freedom Act, which would stipulate that Congress not add “any new tax, fee, royalty, or other charge” to local radio stations for public broadcast of performances. [16] AFM claims that this legislation gives an unfair advantage to traditional “terrestrial” broadcast radio stations over digital services such as SiriusXM, and Spotify, by not forcing them to pay musicians performance royalties as do the digital stations. [17]