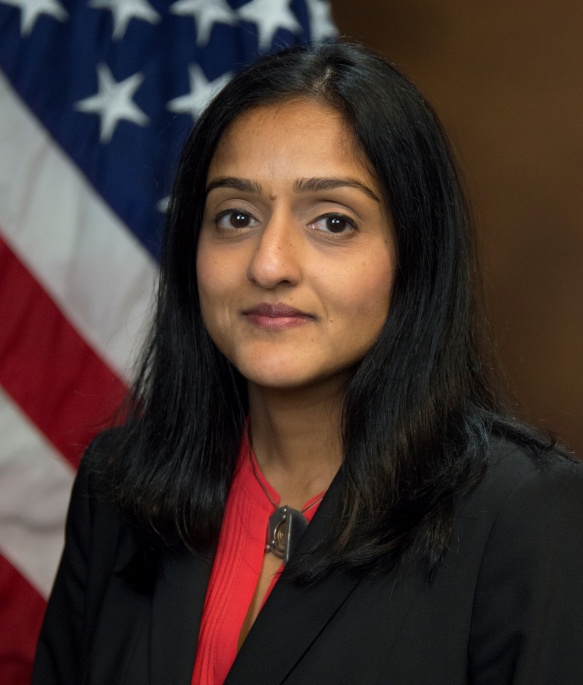 Portrait of Vanita Gupta in foreground; US flag in background (link)

Vanita Gupta is a civil rights attorney and the former president and CEO of the Leadership Conference on Civil and Human Rights (LCCHR). She was appointed to lead the Civil Rights Division of the U.S. Department of Justice under President Barack Obama and was nominated for Associate Attorney General under President Joe Biden in January 2021. She previously worked for the NAACP Legal Defense and Education Fund and the American Civil Liberties Union. [1]

Gupta is married to Chinh Q. Le, the legal director of the Legal Aid Society of the District of Columbia.

In 2001, after graduating from the New York University School of Law, Gupta began working at the NAACP Legal Defense and Education Fund. At 26, Gupta embarked on her first major case by investigating a massive 1999 drug raid in Tulia, Texas, in which 46 suspects, including about 10% of the small town’s black population, were arrested and given unusually long sentences, topping out at 300 years. Gupta raised attention about possible prosecutorial misconduct, and “60 Minutes” ran a story on the incident. After then-Texas Governor Rick Perry (R-TX) pardoned most of the defendants, Gupta helped them sue the federal government for $5 million in damages, resulting in the disbandment of the federal task force which made the arrests. [6]

In 2006, Gupta became a staff attorney at the American Civil Liberties Union’s Racial Justice Program, and director of its Campaign to End Mass Incarceration. [7] In 2007, Gupta settled a lawsuit against the U.S. Department of Homeland Security (DHS) and U.S. Immigration and Customs Enforcement (ICE) for holding immigrant children in unsatisfactory conditions at the T. Don Hutton detention center in Taylor, Texas. All children held by the facility were released, and the facility is no longer used for immigrant detention. [8]

In 2017, Gupta became the president and CEO of the Leadership Conference on Civil and Human Rights (LCCHR), succeeding Wade Henderson, who led the organization for 21 years. [9] As of spring 2021, Henderson replaced Gupta to become the interim president and CEO of LCCHR after Gupta stepped down.

Holder described the Civil Rights Division as the “crown jewel” of the Department of Justice. Gupta was appointed in the middle of a wave of national controversy concerning police shootings of African American suspects and played an active role in the federal government’s response. [11]

In 2015, Gupta oversaw the federal report on the conduct of the Ferguson Police Department following the police shooting of Michael Brown and ensuing civil unrest. The report alleged a culture of racism and exploitation in the department, claiming that police aggressively pursued fines and asset forfeiture as a means of raising revenue. Gupta later led investigations into police departments in Baltimore and Chicago, heard appeals on voter identification laws in Texas and North Carolina, and wrote a federal condemnation of solitary confinement in her role at the DOJ. [12][13]

In 2016, Gupta led a lawsuit against the North Carolina state government after the passage of House Bill 2 (HB2), which forced public buildings to only permit individuals to use gendered bathrooms according to the sex listed on their birth certificate. The complaint alleged that HB2 discriminated against transgender individuals. [14]

Gupta left the Department of Justice in January 2017 at the conclusion of the Obama administration’s mandate. [15]