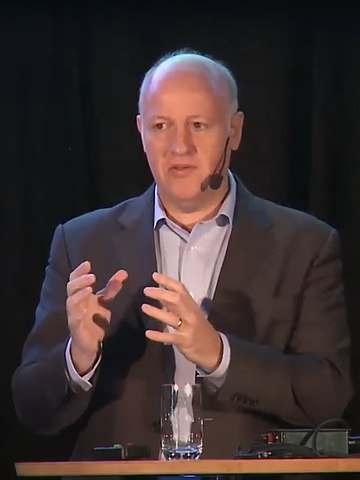 Peter Daszak is a virologist and the president of EcoHealth Alliance, an American nonprofit dedicated to developing global healthcare infrastructure.

Daszak built his career in the study of zoonosis, the transmission of viruses from animals to humans. After becoming president of EcoHealth Alliance, the organization received a grant from the U.S. National Institutes of Health (NIH) to study the potential rise of novel coronaviruses in China. To conduct this research, Daszak partnered with the Wuhan Institute of Virology (WIV), a Chinese government-backed research center in Wuhan, China.

Since the outbreak of the COVID-19 pandemic in 2019, some have speculated that the virus was developed or held within the Wuhan Institute of Virology and may have accidentally leaked from the lab. Over the course of two years, reports have shown that Daszak may have undermined efforts to uncover whether WIV was involved in the COVID-19 outbreak. As of mid-2021, conclusive information on WIV’s involvement and Daszak’s activities is not available.

Peter Daszak earned a degree in applied zoology from Bangor University in Wales, and a Ph.D. in parasitic infectious diseases from the University of East London. [1] After graduating, Daszak worked in a variety of nonprofit-sector health care roles and became a proponent of “conservation medicine,” a newer interdisciplinary field that examines interactions between humans and animals and the spread of disease between them. [2] In the early 2000s, Daszak was a leading international researcher on zoonosis, the process of viral transfer from animals to humans, performing research on Avian Flu, the West Nile virus, SARS-1, and other major global diseases. [3]

Daszak is a member of many health-related boards and agencies throughout the world, including the National Academy of Medicine, the U.S. Nuclear Regulatory Commission Advisory Committee to the US Global Change Research Program, the One Health Platform, CEEZAD External Advisory Board, the Cosmos Club, the Bridge Collaborative, the Institute of Medicine’s committee on global surveillance for emerging zoonoses, the International Standing Advisory Board of the Australian Biosecurity CRC, and an advisor to the World Health Organization’s pathogen prioritization for R&D. [6]

Peter Daszak has come under scrutiny in 2021 due to his history with coronavirus research, the Chinese government, and his public statements on the COVID-19 pandemic. Critics have alleged that he may have undermined attempts to honestly investigate the origins of SARS-COV-2 to preserve the reputation of his organization and field of study. [7]

In 2014, Daszak and EcoHealth Alliance began running a program through the U.S. National Institutes of Health (NIH) that researched the possible emergence of a novel coronavirus in bats that could transfer to humans. The project specifically looked at inland China as a potential source of these viruses. Over six years, the project received $3.75 million in funding from the National Institute of Allergy and Infectious Diseases (NIAID), which is part of the federally funded and operated NIH. [8]

As part of this program, EcoHealth Alliance gave $600,000 to the Wuhan Institute of Virology (WIV), a Chinese government-run viral research organization under the Chinese Academy of Sciences. After the start of the COVID-19 outbreak in late 2019, some theorized that the WIV may accidentally have released the virus in what has become known as the “lab leak theory.” Preliminary evidence for the theory included the organization’s geographic proximity to the origin of the outbreak and that the WIV specialized in research into SARS-related coronaviruses like COVID-19. The Chinese government has denied any connection between COVID-19 and the WIV. [9][10]

On February 19, 2020, the Lancet, a British medical journal, published what has become known as the “Lancet Letter,” a statement condemning the lab leak theory as “conspiracy theories” based on “rumours and misinformation” which undermined legitimate efforts to combat the COVID-19 pandemic. The letter cited numerous papers by respected scientists arguing that COVID-19’s biological structure indicates natural origins. Daszak and 26 other scientists signed the “Lancet Letter” in support. [11]

While at first the lab leak theory was largely dismissed by mainstream sources, the popular consensus shifted in 2021 to considering the theory plausible. In January, New York Magazine published an exploration of lab leak theory and concluded that it was plausible. [12] In March, 60 Minutes reported on the theory. In May, CNN revealed that the U.S. State Department under President Donald Trump had investigated the lab leak theory until President Joe Biden’s administration stopped the investigation. [13] As the consensus shifted, the Lancet Letter faced criticisms that it had suppressed discourse and discouraged investigations that could have shed more light on COVID-19’s origins. Jamie Metzl, a WHO advisory board member, accused the signatories of the letter of engaging in “scientific propaganda and thuggery.” [14]

On June 3, 2021, Vanity Fair published a lengthy investigation into the lab leak theory. It found that not only was Daszak the  organizer of the Lancet Letter, but he had also asked two other scientists not to sign the letter to boost its credibility. One of these scientists was Ralph Baric, who had worked with the WIV on coronavirus research. [15]

All the signatories of the Lancet Letter declared that they had no conflict of interest in their condemnation of the lab leak theory. After revelations came out of EcoHealth Alliance funding the WIV, Daszak resigned from the Lancent’s COVID-19 commission. [16]

On February 27, 2020, Dr. Daszak wrote an op-ed for the New York Times taking credit for predicting the COVID-19 pandemic and blaming governments for not adequately preparing for it. Dr. Daszak was a member of the WHO’s R&D Blueprint team—which, at a 2018 meeting, detailed the threat of “Disease X,” its name for a novel coronavirus that would jump from animals to humans with a higher rate of virality and mortality than the common flu. Its description of Disease X closely aligned with COVID-19. [17]

In April, an NIH official wrote to EcoHealth Alliance with a series of questions concerning its grant to study coronaviruses, including whether the organization had given funds to the WIV. Daszak personally responded to the inquiry with: “I can categorically state that no fund from [the grant] have been sent to the Wuhan Institute of Virology, nor has any contract been signed.” [18]

Reports from other EcoHealth Alliance personnel, May 2021 Congressional testimony by NIAID Director Anthony Fauci, and statements later made by Daszak would all indicate that this was contrary to the facts. [19][20] After denying it to the NIH in mid-April, he told reporters at National Public Radio that EcoHealth had given money to the WIV to facilitate the collection of animal samples in China. [21] In a December 2 article from Nature, Daszak was described as a long-time collaborator with one of the WIV’s lead researchers. [22]

A few days after Daszak responded to the NIH inquiries, the NIH cancelled its grant to EcoHealth Alliance. The NIH also ordered EcoHealth Alliance to not spend the remaining $369,819 on the grant, which was an unusually punitive measure usually reserved for cases of scientific misconduct. [23]

After a public backlash against President Trump for shutting down coronavirus research during a coronavirus outbreak, the NIH reversed its termination but suspended funding pending further investigations. A new virus research grant was later awarded to EcoHealth Alliance. [24]

In late 2020, the WHO assembled a team of scientists to investigate the origin of the COVID-19 pandemic. Daszak was appointed as the group’s only US-based representative. [25] In January, the team concluded that the lab-leak theory was “extremely unlikely.” [26]

Some researchers argue in favor of the lab-leak theory by pointing to the unusual biological structure of COVID-19 as evidence that it was artificially altered. Such alterations could have occurred through “gain-of-function” research, whereby the infectiousness and strength of viruses are enhanced to study treatments in a controlled, laboratory setting. [27][28]

As the head of EcoHealth Alliance, Daszak had distributed NIH funds to institutes to engage in gain-of-function research despite the NIH officially issuing a moratorium on gain-of-function research in 2014. After the public confirmation that EcoHealth Alliance gave funds to WIV, this caused speculation that Daszak had given funds to the WIV specifically for gain-of-function research. As one former federal health official quoted in Vanity Fair was reported as saying: “An institute ‘funded by American dollars is trying to teach a bat virus to infect human cells, then there is a virus’ in the same city as that lab. It is ‘not being intellectually honest not to consider the hypothesis’ of a lab escape.” [29]

In May 2021, U.S. National Institute of Allergy and Infectious Diseases director Anthony Fauci acknowledged to Congress that the NIH gave funds to the WIV through EcoHealth Alliance, but he denied any funding for “gain-in-function” research. [30][31]

However, in June, House Republicans demanded a briefing from the government on its policies toward gain-of-function research. When questioned, NIH director Francis Collins reiterated Fauci’s statement that the NIH never funded gain-of-function research at the WIV. However, he conceded that the lab could have acted outside the parameters of the grant and that American oversight was limited. [32]

Accusations of Corruption and Obstruction

Daszak has faced accusations of purposefully obstructing attempts to investigate the origins of COVID-19. Vanity Fair has speculated that Daszak may have fought against the lab-leak theory regardless of its validity to protect the reputation of EcoHealth Alliance and the entire field of zoonosis. [33]

In June 2021, National Review published a critique of Daszak focusing more on his connections with the Chinese government. The WIV’s research and access to local Chinese resources is crucial to EcoHealth Alliance’s continued coronavirus research, so Dr. Daszak is incentivized to maintain a good relationship with the Chinese government. He has repeatedly been interviewed by Chinese state-media outlets on the COVID-19 pandemic as a Western source that disavows the lab-leak theory. In a February article in the Chinese state-media outlet Global Times, Daszak was quoted in a manner that indicated support for the baseless theory that the COVID-19 pandemic started in Southeast Asia and was imported to China. [34]

Daszak was the only American on the WHO COVID-19 origin investigation team because all other potential American members had been rejected by the Chinese government for entry into the country. According to National Review, Daszak’s investigation reports indicate he was “spectacularly incurious” about the virus’s origins as he refused to adequately probe Chinese officials for information. The director-general of the WHO similarly found the commission’s report inadequate. [35]