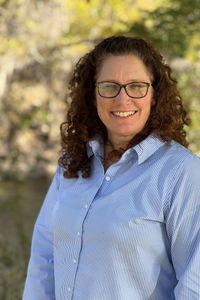 Pam Anderson is a Republican election official from Colorado who previously served as the elected city clerk in the City of Wheat Ridge, Colorado, and as the elected clerk for Jefferson County, Colorado. She is a board member of the left-leaning election administration advocacy group Center for Tech and Civic Life, which is known for facilitating hundreds of millions in donations from Mark Zuckerberg to fund local election departments in certain localities across the United States during the 2020 election cycle.

Pam Anderson attended California Lutheran University followed by the University of Colorado-Denver, where she earned a bachelor’s degree and a masters in public administration. In 2002, Anderson was elected as the municipal clerk for the City of Wheat Ridge, Colorado, a city of approximately 31,000 residents in a role that included public meeting administration, record management, and liquor licensing. [2]

In 2006, Pam Anderson was elected as the clerk and recorder for the Denver suburb of Jefferson County, Colorado, a role that she held until August 2020. As the Jefferson County clerk and recorder Anderson represented 520,000 constituents and managed several departments with a total of 110 employees including county administration, the clerk to the Board of County Commissioners, a Recording Division, Elections Division, and Motor Vehicles Division. [3]

Since 2015, Anderson has owned a small consulting firm called Consilium Colorado LLC where she conducts non-profit and public management consulting regarding “elections policy and administration” as well as implementations of elections programs, strategic planning and communications and outreach campaigns. [4]

The organization drew criticism from the political right when Mark Zuckerberg and his wife Priscilla Chan donated a total of $350 million to CTCL. CTCL then donated the funds in the form of grants to various jurisdictions throughout the United States to help them hire more staff, buy mail-in ballot processing machinery, and pursue other measures they deemed necessary to properly handle the election amid the COVID-19 pandemic. [8] [9]

Campaign for Secretary of State

In October 2021, Anderson announced plans to run for Colorado Secretary of State as a Republican, challenging incumbent Jena Griswold (D). Anderson was the first Republican to enter the race and her announcement drew attention from local media where she was described as “at odds” with other Republicans because she has stated she believed the 2020 election to be accurate nationally and in Colorado. Anderson stated at the launch of her campaign a desire to make the Secretary of State’s office less political after incumbent Secretary Griswold drew criticism from some local election officials in Colorado for making frequent cable news appearances criticizing President Donald Trump. [10]