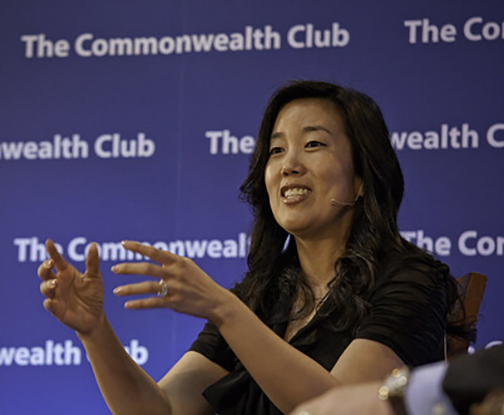 Michelle Rhee is an education reform activist, former Chancellor of the District of Columbia public schools, and spouse of Kevin Johnson, the former Mayor of Sacramento, California. She is the founder of Students First, an education advocacy group, and served as its executive director until the organization merged with 50CAN in 2016. Rhee previously served as Chancellor of District of Columbia public schools from 2007 to 2010. In 1997, she founded and led the New Teacher Project (TNTP).

Rhee was born in Ann Arbor, Michigan to Korean immigrants. Her father was a doctor and her mother owned a clothing store. Raised in Toldeo, Ohio, she graduated from the exclusive Maumee Valley Country Day School. She earned a bachelor’s degree in government from Cornell and Master of Public Policy from Harvard University. [1]

While at Cornell, Rhee saw a PBS documentary about Teach for America and decided to enroll in the program. Assigned to a school in Baltimore, Rhee later recalled that she felt unprepared for the experience of teaching. In one incident, she said that she was so frustrated with rowdy students that she taped their mouths shut causing one student to bleed when the tape was removed. [2]

Later, during her confirmation hearing, it was discovered that Rhee exaggerated the successes of her students’ performances on her resume and in previous public speeches. Rhee told New York Times reporters that 90% of her students performed in the 90th percentile when most of her students were at grade level, with a few performing at the 90th percentile. Rhee blamed the discrepancy on recordkeeping inconsistencies between the school’s principal and the state of Maryland. [3][4]

In 1995, at the recommendation of Teach for America founder Wendy Kopp, Rhee established The New Teacher Project to support quality education for predominantly low-income and minority children. The program focused on recruiting and training college graduates and those interested in education to serve at-risk youth. [5] [6]

Her efforts in the position were praised by many on the right and left, including former First Lady Laura Bush. Teachers’ union activists argued that the New Teacher Project supported school choice efforts opposed by government worker unions. [7]

In 2007, the position of Chancellor of District of Columbia public schools was created after decision making powers were stripped from the Board of Education. Then-Mayor Adrian Fenty (D) appointed Rhee Chancellor on the recommendation of Joel Klein, at the time chancellor of New York City public schools. [8]

Critics of her tenure claimed that she was too young and inexperienced. Others argued that she closed schools without hearings, withheld complete budget figures from the D.C. Council, and failed to involve parents in much of her decision-making process. Many critics argue that she was too eager to fire teachers and administrators. [9] [10] [11] [12]

In 2008, Rhee attempted to negotiate again offering salaries of $140,000 per year with an end to tenure rights or pay cuts with tenure rights. The Washington Teachers Union rejected the proposal. In 2010, Rhee and the union reached an agreement, with 20 percent pay raises and bonuses of nearly $30,000 in exchange for reforms to teacher tenure and seniority protections. Under Rhee’s rules, 241 teachers were let go and 737 were put on notice of low performance and potential termination. [13] [14]

In 2011, while leading Students First, she came out in favor of school choice vouchers in a Wall Street Journal editorial and appeared at an event supporting school choice reforms with then-Wisconsin Governor Scott Walker (R). [17] [18]

Michelle Rhee lives in Sacramento, California with her husband, Kevin Johnson, who served from 2008 until 2016 as Mayor. Johnson is also a former professional basketball player. The two met when she was on the board of St. Hope’s, an AmeriCorps school that Johnson led for a period of a few years. [19]

In 2009, the New York Times reported that Rhee attempted to defend Johnson (then her fiancé) from a federal investigation to the alleged misuse of nearly $800,000 as head of St. Hope’s School, a school run by the AmeriCorps program which Rhee served on the board, along with sexual assault allegations. The report later found no wrongdoing, but critics argued that Rhee played a role similar to a “fixer” in the investigation. [20]

Previously, she was married to and had three children with Kevin Huffman whom she met through Teach for America. Huffman is Nashville-based education policy activist. [21]