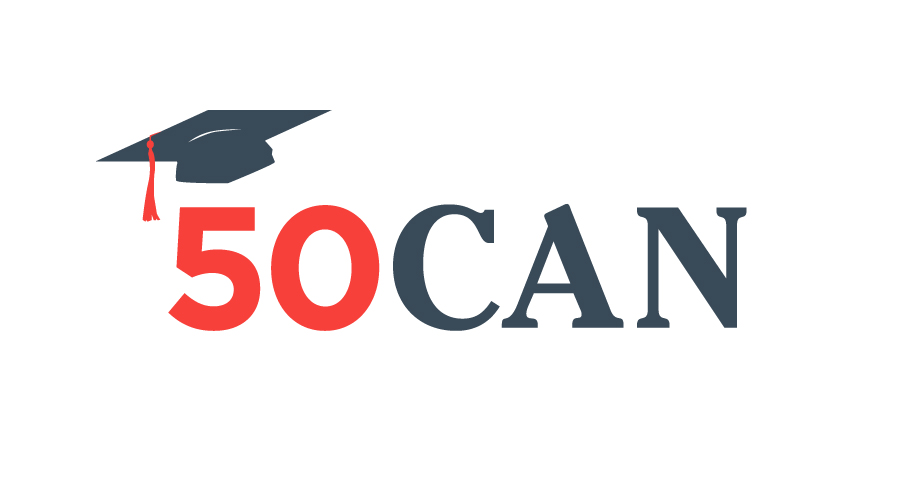 Marc Porter Magee, a career activist for a number of center-left organizations, is the founder of 50CAN and currently serves as the chief executive officer. [2]

ConnCAN (Connecticut Coalition for Achievement Now), the first chapter of 50CAN, was formed in 2005 as to combat Connecticut’s high achievement gap between white and affluent students and low-income, black, and Hispanic children. [3]

In 2010, ConnCAN pressured state legislators in Connecticut to support Connecticut’s participation in the Race to the Top program. Race to the Top was a federally funded competition by the Obama administration to encourage school districts to reach certain milestones such as teacher evaluations based on student achievements and adopting curriculum standards similar to Common Core. [5][6]

In 2016, GeorgiaCAN, South CarolinaCAN, and TennesseeCAN were established as local chapters of 50CAN. Delaware later followed in 2017. New Mexico Kids CAN and Hawaii Kids CAN joined in 2018. [8]

YouCAN is a project of 50CAN that seeks to provide activism training for those who typically aren’t associated with activism. Through a part-time program, participants establish an effort that they want to see in their communities and work towards expanding this within their organization or launching their own organization for the purpose of completing the effort. Alumni of this program range from teachers, school administrators, administrators, policy researchers, and community members. The program is part-time and requires participants to “develop, refine, and launch an advocacy project that compliments that compliments the overall advocacy efforts in their states.” [9]

According to 50CAN’s website, the most recent graduating class of YouCAN alumni was in 2017. [10]

50CAN Education Advocacy Fellowship is a yearlong program that provides activism and leadership training for those interested in education reform. Alumni of the fellowship range from teachers launching an after-school program, administrating working to raise test scores, or researchers working to place their research into certain activism projects that align with 50CAN’s mission. Graduates of the fellowship program are responsible for using the information that they obtained during their time in the fellowship and taking a position of leadership within an advocacy organization or launching their own organization or cause that is in line with the mission of 50CAN. [11]

One of the most notable alumni of the fellowship is Hawaii State Representative Takashi Ohno (D-Honolulu). [12]

50CAN provides a host of additional services at cost to state level policy think tanks, community organizations, and small groups.

50CAN offers two training courses: Education Policy 101 and Advocacy 101. Education Policy 101 focuses on policy issues that affect the K-12 education system. This course is offered to provide the education policy perspective of 50CAN to include seminars taught by the organization’s executive and policy leadership. [13] Advocacy 101 focuses on teaching activism tools, such as fundamentals of advocacy and the “major players on the educational stage”. This course focuses on providing teachers and community leaders who possess a strong background in education polciy with the tools to perform effective activism. [14]

In addition to trainings, the leadership team which consists of former teachers, policy researchers, and activists provides their research abilities to clients along with the opportunities for various speaking engagements on the issues that 50CAN advocates for at the state and federal level. The organization also offers its services in the following areas: strategic planning, building activism campaigns, leadership training, and communications consulting. [15]

Many of 50CAN’s grants supports the formation of specific state chapters and projects.

Marc Porter Magee is the founder and current CEO of 50CAN. Prior to serving as CEO, he was the Chief Operating Officer for ConnCAN. Magee previously worked as a researcher for the Progressive Policy Institute, a centrist-liberal think tank. He holds a Ph.D. in sociology from Duke University. [17]

Vallay Varro is the president of 50CAN. Prior to serving as president, she served as school board director for St. Paul, Minnestota public schools and as education policy director for former St. Paul Mayor Chris Coleman (D). She is also a former classroom teacher. Varro led the launch of MinnCAN, Minnesota’s chapter of 50CAN.