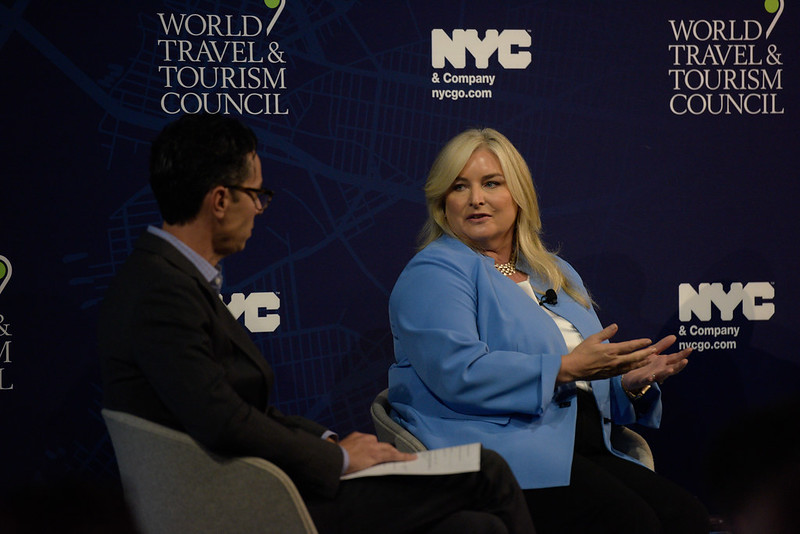 Kelly Craighead is the CEO of the Cruise Line International Association (CLIA) and former president of Democracy Alliance, a major donor clearinghouse for Democratic and left-wing donors and advocacy organizations. Craighead started her political career in the Clinton White House and is reportedly a close associate and friend of former Secretary of State Hillary Clinton.

There is little information available about Kelly Craighead’s early career, but she briefly worked as a sales manager. [1]  In 1993, she began working in the Clinton administration as an aide to then-First Lady Hillary Clinton (D). In 2000, Craighead worked on Clinton’s 2000 U.S. Senate campaign and raised $500,000 for the campaign before becoming embroiled in a campaign finance scandal. [2] Campaign financial director David Rosen was accused of hiding $800,000 in fundraising costs to artificially boost the appearance Clinton’s fundraising numbers; federal authorities further alleged that Craighead was aware of the financial misconduct and did not act to stop it. Rosen was indicted but not convicted; while Craighead was listed as a witness, she did not testify and faced no charges. [3]

Craighead has been described as a “good friend” of Hillary Clinton. [4] Bill and Hillary Clinton presided over Craighead’s marriage to Erik Mullen, a Democratic consultant and former aide to U.S. Senator Chuck Schumer (D-NY). The couple celebrated their engagement in the White House. [5] [6]

After the Clintons left the White House, Craighead initially worked as a consultant to lobbyists in Washington D.C., [7] and then made a name for herself as a Democratic fundraiser. In 2004, Craighead worked as a fundraiser for the newly-formed Media Matters for America, a left-of-center media watchdog, and successfully established a financial base of $60 million. [8] [9]

From 2006-2013, Craighead led Democracy Alliance. [10] Craighead was noted to orient the organization around partisan Democratic politics over left-leaning ideological goals. Controversially, Craighead led the integration of Democratic Super PACs into the Democracy Alliance, which critics within the organization believed betrayed the group’s grassroots image. [11] Craighead was described as having “extensive ties to the [2012] Obama campaign,” [12] and raised almost $500,000 for it. [13]

According to the Huffington Post, Craighead’s successor at Democracy Alliance, Gara LaMarche, was chosen to indicate to donors an organizational shift back to prioritizing ideological goals over political goals. [15] Politico described the departure of Craighead as the final untethering of Democracy Alliance from Hillary Clinton, as the organization consolidated around President Barack Obama (D). [16]

From 2014-2017, Craighead worked as U.S. Deputy Assistant Secretary for Travel and Tourism and Executive Director of the National Travel and Tourism Office in the Obama administration. [18] She has described the position as “de facto tourism minister of the United States. [19] Craighead allegedly led initiatives that generated $250 billion in tourism revenue for the United States. [20]

In 2019, Craighead became CEO of the Cruise Line International Association (CLIA), a trade association for cruise lines. [21] In March 2020, Craighead announced the industry’s “unprecedented” decision to suspend all cruise sailings for thirty days in response to the COVID-19 pandemic. [22]

In July 2020, Craighead became a board member of Visit Florida, the state’s tourism agency. [23]

In 2021, Craighead called on the U.S. Centers for Disease Control to end its ‘no sail’ order for cruise ships as a result of the COVID-19 pandemic. [24]