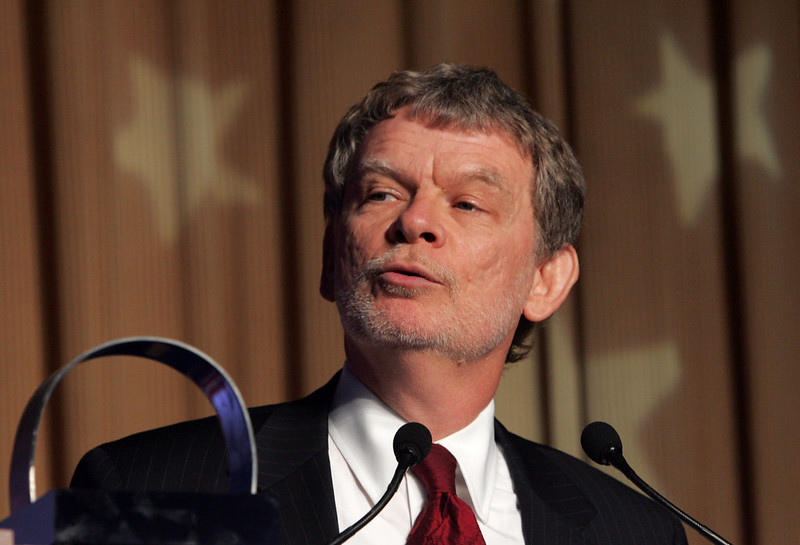 Gara LaMarche is the former president of the Democracy Alliance, a network of left-of-center donors for coordinated giving founded in 2005.[1] Prior to joining the Democracy Alliance, he was a senior fellow at New York University’s Robert F. Wagner Graduate School of Public Service, and president and CEO of the Atlantic Philanthropies.[2] Before joining Atlantic, he was vice president and Director of U.S. Programs for George Soros’ Open Society Foundations. He has also worked for Human Rights Watch, PEN American Center, and the American Civil Liberties Union. His grantmaking has focused on advocacy for controversial left-wing initiatives.

LaMarche is best known for his support of President Obama’s Patient Protection and Affordable Care Act while CEO and president of Atlantic Philanthropies.[3] Under LaMarche’s direction, in 2009 Atlantic gave more than $25 million to Health Care for America Now, a coalition of more than 1,000 left-of-center organizations advocating for the Obama administration’s efforts. In recognition of his support for what would become Obamacare, LaMarche was invited to a celebration of the law’s signing attended by President Obama and Vice President Joe Biden.[4] The decision to advocate for the ACA was not without controversy even within Atlantic Philanthropies, and is reported to have contributed to LaMarche’s eventual departure from that organization.[5]

LaMarche became the youngest member ever to serve on an American Civil Liberties Union policy committee when in his first year at Columbia. A former debate coach working for the organization recommended he fill a student representative seat on its Academic Freedom Committee.[7] As a senior he was recording secretary for the organization’s national board meetings, and, after a stint as associate director of the ACLU’s New York office, he went on to direct the ACLU of Texas in the 1980s.[8]

He later became a director at PEN, the world’s oldest international literary organization. By the early 1990s, LaMarche was associate director of Human Rights Watch.[9]

He moved into left-of-center grantmaking when, in 1996, he went to work for George Soros as vice president and director of U.S. programs for the Open Society Institute (now called Open Society Foundations).[10] Under his direction, OSI promoted controversial positions on issues from drug legalization to LGBT rights and marriage.[11]

LaMarche joined Irish billionaire Chuck Feeney’s Atlantic Philanthropy as CEO and president in April of 2007.[12] While LaMarche was intended to be the organization’s final leader as it sought to give away all of its money by 2016, LaMarche left in controversy in September 2011 after his focus on social-justice giving clashed with Feeney’s priority of infrastructure investment.[13] Feeney biographer Conor O’Clery’s The Billionaire Who Wasn’t details the development and progress of that rift within the organization and Feeney’s growing sense that his philanthropy was being diverted from its original purpose. Of particular concern was the kind of politicized giving LaMarche advocated, illustrated by Atlantic’s support of the passage of Obamacare. LaMarche began Atlantic’s support of the Health Care for America Now coalition even prior to President Obama’s election victory, eventually directing about $27 million of Atlantic’s money to the organization by 2009, which may be a record for advocacy grant giving.[14] LaMarche’s support was widely recognized and celebrated by the administration and the bill’s supporters, exacerbating Feeney’s fears that LaMarche was co-opting his philanthropy. After years of conflicting visions for Atlantic, LaMarche and Feeney parted ways.

LaMarche taught a class on philanthropy and public policy at NYU’s Wagner School of Public Service and has served as an adjunct professor at the New School University and John Jay College.[15]

In 2013, LaMarche became president of the liberal donor consortium Democracy Alliance.[16] Created in 2005, the network of wealthy donors grants money to electoral efforts and policy groups. The organization is supported by membership fees but does not distribute its own funds.[17] Rather, it recommends grant recipients to its members, who make their donations directly, and coordinates their efforts and strategy. LaMarche stepped down as president of the Democracy Alliance in the summer of 2021.[18]

LaMarche is an outspoken and prolific writer. Among other places, his writing has appeared in the New York Times, Washington Post, Financial Times, The Nation, and American Prospect.[19]