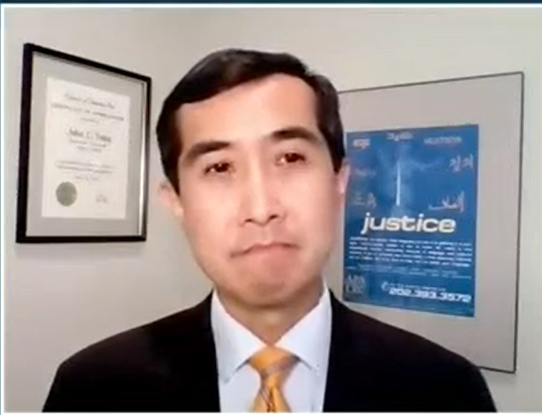 John C. Yang is a lawyer and activist who works as president of Asian Americans Advancing Justice-AAJC. Prior to leading AAJC, Yang served as a trade adviser to Obama administration Commerce Secretary Penny Pritzker. [1]

Yang began his career in 1992 with the law firm Wiley Rein LLC after receiving his law degree from George Washington University. After 16 years with the firm, Yang became the director of legal affairs for the Asia-Pacific region of Illinois Tool Works (ITW), [2] a Fortune 500 company that makes automotive and commercial equipment. [3] Yang also had experience in the U.S. Department of Commerce as an advisor for East Asia affairs. [4] Additionally, he held various positions throughout the years with the American Bar Association including board member, delegate, and chair positions. [5]

Currently, Yang is the president and executive director of Asian Americans Advancing Justice (AAJC), a left-of-center group that advocates for affirmative action, voting rights, and engages in litigation on behalf of Asian Americans. He assisted in securing the nomination and confirmation of over 20 Asian American and Pacific Islander federal judges and Senate-confirmed presidential appointments. [6] Yang has also been articulate about the 2020 Census discussions on social media and other platforms, including a piece written for The Census Project. [7]

Yang donated $48,020 during the 2017-2018 election period to the Democratic National Committee and various Democratic candidates for office. [8]