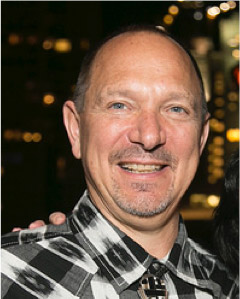 James Gollin is a former investment fund executive and current Democratic donor who is active in a number of left-of-center political causes. Gollin is involved in activist nonprofits focused on environmentalism, Democratic Party politics, and political causes in South and Central America. He is married to fellow donor and activist Suzanne Gollin. The couple lives in Santa Fe, New Mexico, where they are also active in state-level political causes. [1]

The Gollins founded the Angelica Foundation in 2004, through which they issue grants to a variety of left-of-center causes. The foundation reported holding nearly $3.5 million in assets in 2017, and reported paying the couple a combined salary of over $100,000 per year. [2]

In addition to political activism and nonprofit involvement, James Gollin is a writer who has authored books on subjects including music, Latin American affairs, and Catholicism. [3]

After working at several global think tanks in Japan, Gollin returned to the United States to begin a career in investment banking. He held positions at Nomura Securities and Morgan Stanley before co-founding the investment management company Pacific Partners, specializing in securities and real estate investments. The success of Pacific Partners allowed Gollin to retire and move to New Mexico to pursue philanthropy and political activism. [5]

Gollin co-founded the Social Venture Network, a 510(c)(3) nonprofit designed to “support, connect, and empower social entrepreneurs.” As of 2016, the organization had more than $15,000 in negative net assets. [6]

He remains an active investor in a variety of ventures, including real estate, and maintains a real estate broker’s license. [7]

Gollin is an active donor to left-of-center political groups, candidates, and campaigns.

Since 2007, Gollin has donated more than $48,000 to Democratic candidates on the local, state, and national levels, not including similar donations made by his wife. [8] He was a donor to President Barack Obama’s campaigns and visited the White House on at least 10 occasions throughout the Obama presidency. [9]

Gollin and his wife, Suzanne, founded the Angelica Foundation in 2004. It is heavily funded by the couple and a small group of private contributors, including the Open Society Institute, the grant-making organization of controversial liberal financier George Soros, and British food packaging heiress Sigrid Rausing, whose private trust in 2017 alone donated over $250,000 to the organization. [10]

While the Angelica Foundation issues grants to a range of left-wing organizations, more than 80 percent of the funds dispersed in 2017, and similar portions in previous years, went to the Tides Foundation. [11] Tides funds a wide variety of left-of-center causes and political groups in the United States, and has been criticized in the past for a lack of transparency. [12]

The Angelica Foundation also donates to the Drug Policy Alliance, which advocates for legalization, decriminalization, and reduced sentencing for certain controlled substances. [13]

Gollin formerly served as a board member of the left-wing donor collective Democracy Alliance. [14] As a board member, he helped select which groups receive portions of members’ $200,000 annual contribution pledges. The Alliance gives to liberal powerhouses such as the Center for American Progress, Media Matters, and Democratic super PACs including Priorities USA.

Gollin has served as an officer to left-of-center environmental groups, including The Treevolution. He served as president of the Rainforest Action Network (RAN), which has pressured companies such as Home Depot, logging outfit Boise, and Citibank, to withdraw from logging operations. [15] He also helps coordinate RAN’s micro-grant programs supporting small, primarily indigenous-led, on-the-ground forest protection groups. [16]

In addition, Gollin serves or has served on a range of other progressive nonprofit boards, including the Richardson Center for Global Engagement, Center for Community Change Action, Public Interest Intellectual Property Advisors, the Canyon Neighborhood Association, Project New Mexico, and religious organizations including the Prajna Mountain Buddhist Order and the Upaya Zen Center. [17]