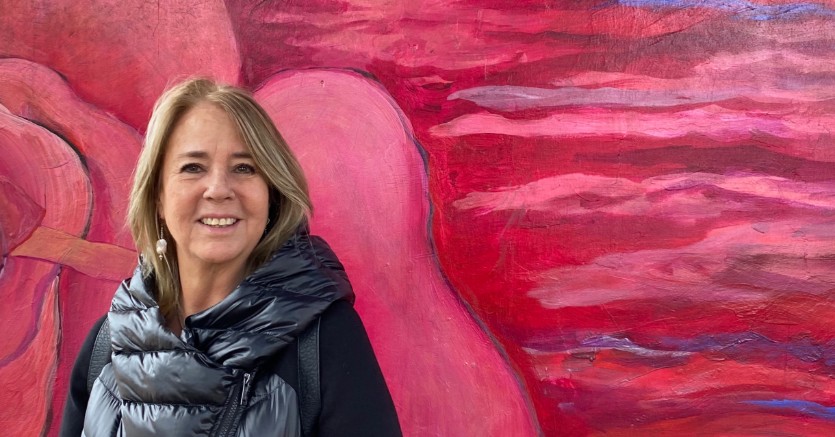 Suzanne Gollin is a writer, activist, and donor to left-of-center causes and campaigns. She is the daughter of Las Vegas businessman and alleged mobster Morris Barney Dalitz and the wife of former investment banker James Gollin. [1] [2]

In 2004, James and Suzanne Gollin founded the Angelica Foundation, which funds social and economic justice, environmental sustainability, drug policy reform, and human rights causes in the U.S. and Latin America. [3] They have served as board members to numerous left-leaning organizations and made donations to a number of Democratic politicians, including President Barack Obama and Hillary Clinton.

Born Suzanne Dalitz in 1957, Gollin is the only child of Moe Dalitz, a Las Vegas businessman, casino owner, philanthropist, and alleged gangster. Having gotten his start as a Depression-era bootlegger in Boston, Moe Dalitz went on to become one of the major figures who shaped Las Vegas in the 20th century. [4]

Gollin was raised by her father and mother, Averill Dalitz, splitting time among Las Vegas, New York, Mexico, and Switzerland. She became a writer and editor at San Diego Magazine before meeting James Gollin in New York. [5]

Following her father’s death in 1989, Suzanne Gollin has played an active role in telling his story and preserving his legacy, having worked closely with curators to assemble the Dalitz archival collection at the National Museum of Organized Crime and Law Enforcement in Las Vegas. [6]

Gollin is an active donor to left-of-center political groups, candidates, and campaigns.

She is a board member and former president of the Threshold Foundation, a left-wing grantmaking organization with assets totaling $4.1 million in 2016. Other notable figures involved in Threshold include co-founder Anne Bartley. The organization backs such controversial left-of-center organizations as Code Pink, Post Carbon Institute, and SumofUs. [7]

Gollin also serves as the President and co-founder of the Angelica Foundation, which she launched with her husband in 2004. It is heavily funded by the couple and a small group of outside contributors, including the Open Society Institute, a grant-making organization associated with liberal financier George Soros,[8] and Swedish-British food packaging heiress Sigrid Rausing, whose private trust in 2017 alone donated over $250,000 to the organization. [9]

While the Angelica Foundation issues grants to a range of organizations, more than 80 percent of the funds dispersed in 2017, and similar portions in previous years, went to the Tides Foundation. [10] Tides funds a wide variety of left-of-center causes and political groups in the United States, and has been criticized in the past for a lack of transparency. [11]

The Angelica Foundation also donates to the Drug Policy Alliance, which advocates for legalization, decriminalization, and reduced sentencing for certain controlled substances. [12]

Since 2007, Gollin has donated approximately $50,000 to Democratic candidates on the local, state, and national levels, not including similar donations made by her husband. [13] She was a donor to President Barack Obama’s campaigns and, along with her husband James, visited the White House on at least 10 occasions throughout the Obama presidency. [14]