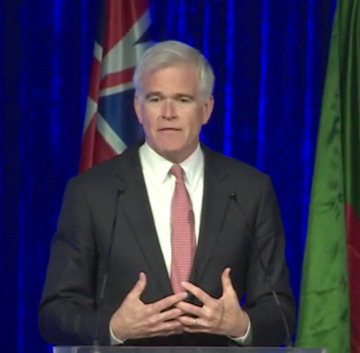 David Blood is a co-founder and senior partner of Generation Investment Management (GIM), a London-based “sustainable” investment fund which bases its $25.1 billion portfolio on an environmentalist ideological outlook and the “environment, social responsibility, and corporate governance” (ESG) investment philosophy. Blood, who was a long-time executive at Goldman Sachs, is a close associate of fellow GIM co-founder and former Clinton administration Vice President Al Gore.

Blood attended Hamilton College where he initially majored in education, but switched to child psychology. He is presently a life trustee of Hamilton. [1]

After graduating, Blood applied to the Peace Corps, but was rejected. He then applied for a Ph.D. program in psychology but was also rejected. At the suggestion of his father, Blood tried to start a career in finance. He would join Bankers Trust Co. in New York City. [2]

Two years later, Blood attended the Harvard Graduate School of Business for a Master of Business Administration. [3] Today, Blood sits on the board of the Harvard Business School Visiting Committee. [4]

From 1985 to 2003, Blood worked at Goldman Sachs in a variety of roles. In 1993, he was transferred to London to lead operations, technology, and finance for all of Goldman’s operations in Europe. [5] From 1999 to 2003, Blood served as co-CEO and then CEO of Goldman Sachs Asset Management (GSAM), a fund which currently holds almost $875 million in assets investing in 74 countries. [6]

At GSAM, Blood met Mark Ferguson, the head of the firm’s financial research team and the son of the former manager of the Manchester United Football Club. In 2002, Ferguson attended a conference in Zurich held by Sustainable Asset Management, a Swiss investment firm. Ferguson became enamored with the company’s management style and focus on environmentalism. He convinced Blood of the strategy’s merits, and GSAM began shifting towards investments along ESG principles. [7]

As head of GSAM, Blood steered the firm to invest heavily into the Chicago Climate Exchange, the only voluntary carbon credit market in North America. Blood would also later invest in the Exchange as head of GIM. Blood and other speculators invested in the Chicago Climate Exchange on the premise that a carbon cap-and-trade law would be passed under the Obama administration. Such a law would force companies to buy “carbon credits” from the federal government and on open marketplaces like the Exchange in order to emit C02 into the atmosphere for industrial purposes. However, no law was ever passed, and the open market price for a credit for a metric ton of C02 declined from $7.50 in May 2008, to $0.05 in November 2010. The Exchange closed at the end of 2010. [8][9]

Blood met former Vice President Al Gore in 2003 while GSAM was consulting Gore on a business deal. [10][11] The following year, Blood, Gore, and five other partners founded GIM with $35 million in assets with offices in London and San Francisco. Neither Blood nor Gore took a salary from the firm for the first three years. Mark Ferguson was another co-founder; he is GIM’s co-CIO of global equity strategy. All seven founders meet twice per year to discuss the company’s direction. [12]

Blood and Gore saw the fund as an opportunity to demonstrate the financial viability of their environmentalist views. The firm only takes long-term (of at least three years) long positions, and factors numerous broader social priorities when considering an investment, including the asset’s interaction with climate change, developing-country poverty, public health, water scarcity, and urbanization. [13]

Blood and Gore have published a series of op-eds in the Wall Street Journal throughout the 2010s outlining their environmentalist views and investment philosophy. They argued that conventional fuels will inevitably become more scare and worsen the financial viability of the economic infrastructure around them. They also endorse increased taxation and regulation by governments throughout the world to expedite the decline of conventional fuels. [16]

Blood and Gore intended GIM to serve as a model for other investment firms to follow, particularly in favoring ESG factors in investment decisions. Through their op-eds, they have encouraged employees of other funds to pressure their employers to divest from fossil fuels and invest in zero or near-zero emission companies. [17] However, Christopher Ailman, the CEO of the System, has stated that GIM has yet to make an impact on the market, and ESG factors are still typically ignored by top firms in the investment space. [18]

Five percent of GIM’s profits go to Generation Foundation, a philanthropic division of the firm dedicated to pushing the global economy towards “sustainable capitalism.” [19]