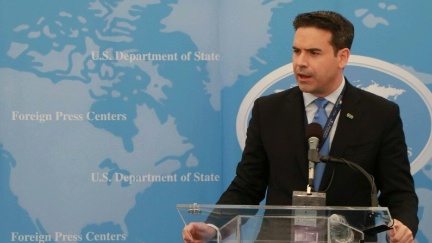 Demand Justice is a project of the 501(c)(4) funding and fiscal sponsorship group Sixteen Thirty Fund.

Fallon received a B.A. in Political Science and Government from Harvard University and graduated in 2003. [4]

In 2004, Fallon served as a press aide on former Sen. John Kerry’s presidential campaign, and later served as the campaign secretary in 2006 for Sen. Robert Menendez. [5] Fallon worked as the communications director for Sen. Charles Schumer (D-N.Y.) from 2007-2010. [6]

From 2011-2013, Fallon served as the communications director for the Senate Democratic Policy and Communications Center before joining the Obama administration’s Department of Justice as director of the Office of Public Affairs in 2013. In that role, he served as the spokesman for Attorney General Eric Holder. [7]

In 2016, Fallon joined the Hillary Clinton’s 2016 presidential campaign as its press secretary. [8]

Between 2016 and 2018, he served as president of Barracks Row Media, a Washington, D.C. public relations firm. He also worked as a political commentator for CNN, and served as a senior advisor for the Hillary Clinton-aligned political action committee Priorities USA. [9]

In early 2018, Fallon began his position as executive director of Demand Justice, a left-leaning 501(c)(4) advocacy organization that aims to influence the leanings of America’s courts by supporting the appointment of liberal judicial nominees and opposing right-of-center nominees. Demand Justice is active in the confirmation process of Supreme Court nominee Brett Kavanaugh, and has lobbied against his confirmation in the U.S. Senate with the aid of allied judicial activist groups People for the American Way and Alliance for Justice. [10] Demand Justice is a project of the 501(c)(4) funding and fiscal sponsorship group Sixteen Thirty Fund.

As executive director, Fallon is the primary spokesperson for Demand Justice. Fallon’s stated goal for Demand Justice is to “make the [Supreme Court nominee] controversial out of the gate by virtue of the fact that they came off the list.”[11]

In July 2018, Fallon explicitly stated his goal of postponing confirmation hearings for Kavanaugh in the U.S. Senate. According to Fallon, Demand Justice will pressure the Senate to review all of Kavanaugh’s work on the various investigations of President Bill Clinton as well as his work as a clerk for Judge Alex Kozinski of the Ninth U.S. Circuit Court of Appeals, who resigned amid allegations of sexual misconduct, before beginning confirmation hearings. [12]

Fallon emphasized his belief that support for constitutional protection of abortion on demand and attempts to declare Obamacare unconstitutional in the Supreme Court would be an issue which could pressure Democratic senators from voting against Kavanaugh. [13]

On Twitter, Fallon openly criticized Sen. Susan Collins’ (R-Maine) insistence that any Supreme Court nominee follow legal precedent. [14] In a follow up interview, Fallon commented that, “The idea that she would ask generic questions about precedent and try to have that suffice as a reassurance on Roe [v. Wade] is unacceptable.”[15]

Fallon participated in Democracy Alliance‘s Spring 2018 investment conference. He was a panelist on a panel entitled “Preserving the Role of Our Courts,” the purpose of which was to “highlight a new organization and new approaches to fight back and protect our courts against the Trump Administration and their congressional allies’ extremist takeover.”[16]