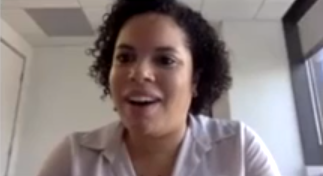 In 2021, she took a position as Deputy Assistant Secretary for Public Affairs at the U.S. Department of Health and Human Services in the Biden administration. [6]

Lynk was born in Illinois and attended Northwestern University. She was a member of Delta Sigma Theta Sorority and graduated in 2011. She began her career in Washington, D.C., as a Capitol Hill fellow in the office of U.S. Representative Jan Schakowsky (D-IL). She worked as a communications intern for the 2012 Barack Obama presidential campaign and later as a senior associate at the Raben Group. [7] She worked her way up through the ranks of Planned Parenthood Federation of America and Planned Parenthood Action Fund. [8] Lynk then worked at the Leadership Conference on Civil and Human Rights.

As of March 2021, she is the Deputy Assistant Secretary for Public Affairs at the U.S. Department of Health and Human Services. [9]

In March of 2021, the Biden administration appointed Lynk as deputy assistant secretary for public affairs at the U.S. Department of Health and Human Services. [10] [11] Lynk was appointed with the specific focus to end the COVID-19 pandemic, expand government-funded health care, and “advance equity.” [12]

During the early months of 2021, the Biden-Harris administration struggled handling the influx of immigrants that have bombarded the southern border of the United States. The media requested access to the government-run migrant facilities and shelters but were denied. Lynk, as spokeswoman for the U.S. Department of Health and Human Services, said that the team was working on a way to open the shelters and detainment facilities to the press. [13]

Lynk worked at the Leadership Conference on Civil and Human Rights, a left-of-center advocacy organization, for just over two years, at which she became the senior program director for the Census campaign and was also the director of the affiliated Leadership Conference Education Fund’s Census Counts 2020 campaign. [14] [15]

During her work as the Census Counts campaign director, which is housed within the Leadership Conference Education Fund, she ensured the 2020 Census counted people the group claimed had “historically been missed,” including undocumented immigrants. [16] She developed a campaign that joined community-based advocacy organizations together to ensure they were counted during the 2020 Census. [17] The Census Counts campaign is a collaboration between 60 left-of-center organizations, including the Arab-American Anti-Discrimination Committee, Black Alliance for Just Immigration, Creative Alliance, National LGBTQ Task Force, National Urban League, and When We All Vote. The campaigns included virtual town hall meetings, partnerships with food banks, a collaboration with postmasters general to deliver gift bags with census information, and Stop the Knock campaigns that encouraged online self-reporting of census information. [18]

Lynk supported LBGT advocacy groups’ campaign to have sexual orientation and gender identity questions, with options that include non-binary terminology, in the census in an effort to “queer the census.” Lynk stated that the census provides data about “where discrimination is happening” and this additional information would help. [19]

In October 2020, the Trump administration halted the process of gathering census information in the field, an action which Lynk and her campaign disapproved of and fought against. She claimed that this particularly impacted the Latino community negatively due to that group’s changing and growing population. [20] Lynk accused President Trump of being “xenophobic” and attempting to deny representation of millions of undocumented immigrants. [21]

The Census Bureau had a deadline of December 31, 2020, to provide former President Donald Trump with their final report, however, advocacy groups vocally disapproved of the deadline saying that there was not enough time provided and data scientists needed more time to complete their work. [22]  The Census Bureau missed the end of the year deadline, which was the first time since the deadline date was established in 1976. [23]

While Lynk was the associate director of federal communications for Planned Parenthood, she focused on political communications and media relations around federal policy, congressional issues, and lawsuits. [24] She oversaw the campaign that was aimed at defeating repeal of the Affordable Care Act in 2017[25] and the “I Stand with Planned Parenthood” campaign, a campaign fighting against efforts to defund the organization. [26] [27] Prior to her role as associate director, Lynk served as state policy press officer within the organization. [28]

While Lynk was working at Planned Parenthood she was involved in a dispute between then-Senator Kamala Harris (D-CA), Planned Parenthood, and then-U.S. Supreme Court nominee Brett Kavanaugh. Harris publicly attacked Kavanaugh for the way he referred to birth control when discussing a case associated with the Religious Freedom Restoration Act and the Affordable Care Act. [29] Planned Parenthood, in a press release, drew attention to the terminology used, but left out that Kavanaugh had said “they said,” which made it appear Kavanaugh was only speaking for himself when he referred to birth control as “abortion-inducing drugs.” Lynk later acknowledged the error, but adamantly disagreed with Kavanaugh’s use of the term. [30]