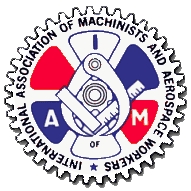 This is a logo for International Association of Machinists and Aerospace Workers. (link)

The International Association of Machinists and Aerospace Workers (IAM) is a large industrial labor union in the United States and Canada. It represents roughly 340,000 dues-paying members in a broad variety of industries, including airlines, logistics, manufacturing, government, utilities, and retail. The IAM is a member of the AFL-CIO. [1]

Today, the IAM is targeting companies such as Amazon and IKEA for unionization to stem its falling membership. [3]

Founded in 1888 by railroad workers as the Order of United Machinists and Mechanical Engineers, the union signed its first organizing agreement with the Atcheson, Topeka and Santa Fe Railroad in 1892. [4]

One of the IAM’s best-known labor actions was the 1989 strike that bankrupted Eastern Airlines. The machinists were later joined in the strike for nine months by Eastern’s pilots, who were unionized members of the Air Line Pilots Association. [5] The airline attempted to operate with replacement employees, but was forced to file for bankruptcy and finally ceased operations in early 1991 without ever resolving the Machinists strike. The New York Times reported that some IAM members “rejoiced” and “celebrated a victory” over a company that had been South Florida’s second-largest employer when the strike began, as well as the first airline the IAM had ever organized 52 years earlier. [6][7]

The IAM actively supports left-wing causes and donates overwhelmingly to Democratic politicians. Since 1990, the union and its affiliated “Machinists Non-Partisan Political League” have donated $37.8 million to Democratic candidates but just $643,161 to Republicans. [8] It has reported $39,846,033 in federal lobbying expenses since 1998.

The union also funds a number of liberal advocacy groups from its general treasury. In 2018, the union reported providing the labor-affiliated think tank Economic Policy Institute with $50,000; the left-wing media event Netroots Nation with $12,500; and the socialist group Workers Defense League with $5,000 among other expenditures supporting advocacy groups. [9]

The Machinists Union was notable in the labor movement of the late 1800s and early 1900s for policies that limited membership in the union to white men.

These racial barriers were so outside the norm in the union movement of that era that they made the IAM ineligible for membership in the American Federation of Labor (AFL). Eventually, a workaround was reached in 1895 that enabled the IAM to join the AFL without actually integrating its membership: The union removed formal racial exclusions from its constitution, but implemented a pledge in each local lodge that no union member would propose a non-white person for membership. While the union opened membership to women in 1911, it was not until 1948 that it finally eliminated its racial exclusions after the passage of the Taft-Hartley Act. [10]

These policies not only impacted the Machinists Union’s own members, but in practice meant companies could not hire women or minorities for jobs if the IAM had organized those positions. For instance, aircraft manufacturer Boeing only hired its first African-American worker in 1942, after the federal government banned discriminatory hiring practices at federal contractors. Boeing claimed its hiring policies were the result of Seattle’s IAM Local 751 being unwilling to represent non-white workers. [11]

Responding to complaints from Machinists Union members that there had not been a contested election for the IAM’s national leadership positions since 1961, the U.S. Department of Labor required the IAM to change its nomination procedures and allow its 2014 elections to be overseen by the Labor Department’s Office of Labor-Management Standards (OLMS). [12] [13] [14] Unsatisfied by the union’s progress toward electoral reforms, federal regulators then required the OLMS to oversee a re-run of the IAM’s 2017 elections, which had confirmed Robert Martinez as the successor to long-time president R. Thomas Buffenbarger. [15] [16]

In 2016, the U.S. Department of Labor sued the trustees of the IAM’s pension fund, alleging a range of mismanagement and corruption that included, “Spending and permitting others to spend fund assets lavishly on unnecessary trips, parties and extravagant food, wine, and accommodations.” [17] The defendants, who included current IAM president Robert Martinez, settled the case by agreeing to repay $200,000 to the fund, pay $40,000 in penalties and revamp the fund’s process for selecting investment counsel. [18]

The IAM and its locals have a contentious history of attempting to skirt state Right to Work laws and otherwise claim jurisdiction over workers who decline to be union members or exercise Beck rights to pay reduced forced fees in forced-unionism states. Some examples include:

The IAM donated $500,000 in 2018 to the Missouri AFL-CIO to support a lavishly-funded campaign against Right to Work legislation in that state.

In 2014, the IAM lost the first-ever unionization vote by workers at an Amazon facility in the United States. The 21-6 vote against IAM representation at a Middletown, Delaware warehouse was widely seen as a high-profile rebuke to unions who have been targeting Amazon’s workforce for unionization. [23]