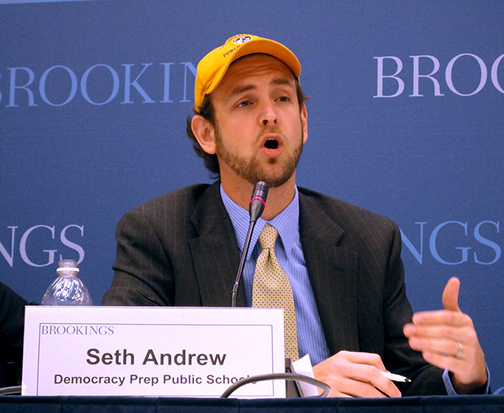 In 2021, Andrew was charged with stealing over $200,000 from his charter school network to obtain a better mortgage on a New York City apartment. [2] In January 2022, the Justice Department announced that Andrew had pleaded guilty to offenses related to the scheme. [3]

Seth Andrew attended Brown University and received an A.B. in Education and Public Policy; he went on to earn an Ed.M. in School Leadership from the Harvard Graduate School of Education. [4]

In 2005, Seth Andrew founded Democracy Prep Public Schools, a network of charter schools designed to benefit inner-city and low-income families. It opened its first school in Central Harlem in 2006 and went on to create more than 20 schools in New York, New Jersey, Louisiana, Nevada, and Texas. [5]

In 2014, Andrew founded Democracy Builders Fund, a nonprofit incubator that financed education projects. [6] He stepped down from the position of CEO in 2021. [7]

From 2014 to 2016, Andrew worked in the Obama administration, first under Education Secretary Arne Duncan and then as senior advisor to the U.S. Chief Technology Officer in the Executive Office, focusing on STEM Education. [8]

In 2014, Seth Andrew co-founded Washington Leadership Academy, a “laboratory” for STEM-inclined high school students. [9] From 2017 to 2018, Andrew served as the global director of NewGlobe’s initiative to open schools in Liberia. [10]

Seth Andrew’s Democracy Builders Fund received a $312,107 loan in March 2020 from the Paycheck Protection Program, and then received a second loan for nearly a $1 million in May 2020. However, journalists discovered that the group had less than $400,000 in expenses during the 2018 fiscal year. The loan received in May was sent to the address that VoteAmerica went on to use to incorporate itself. [12]

Debra Cleaver, the founder of VoteAmerica, has explicitly said that Democracy Builders fiscally sponsored her organization before it attained its own tax-exempt status. For a time, VoteAmerica’s roughly 20 employees received their paychecks from Democracy Builders. [13]

In 2020, as Andrew was failing to secure accreditation and other qualifications to open a college in the remains of the shuttered Marlboro College in Vermont, he and his school network Democracy Prep was accused by Black N Brown at DP, an anonymous group of students and staff of Democracy Prep schools, of engaging in racist and abusive practices. At the same time, Democracy Prep leader Natasha Trivers criticized Andrew in Boston Globe for suggesting that the schools’ alumni were not successful in college, and stressed that Andrew (after having resigned as Democracy Prep CEO in 2013) no longer had anything to do with the school network. [14]

In a Medium.com blog post that he has since deleted, Seth Andrew acknowledged the accusation of racist practices and stated he regretted certain “mistakes” he made in his role as CEO of Democracy Prep, which had “come into sharper focus through the national conversation prompted by the murder of George Floyd and too many others; social media posts; difficult but necessary conversations with alumni, students, faculty, families, and staff.” [15]

Some practices Andrew apologized for included making children wear their uniforms inside out or eating their meals in the hallways without talking as punishment, adding, “To the students who felt like these actions were similar to the inherently racist criminal justice system, your feelings are valid.” [16]

LeShae, a former teacher at a Democracy Prep school in Harlem, described how Andrew would “red-face yell at children and parents, like they’re not human,” and described his disciplinary methods as “psychological warfare.” [17]

In April 2021, Seth Andrew was arrested on charges of wire fraud, money laundering, and making false statements to a financial institution after he allegedly stole $218,005 from Democracy Prep Public Schools. [18] [19]

He reportedly used the money to obtain a lower rate on a mortgage for a Manhattan apartment for him and his wife, CBS News anchor Lana Zak. According to Bloomberg News, Andrew stole the funds in 2019 from the charter schools’ escrow accounts. [20] According to a Democracy Prep board member, Andrew refused to fund the schools with anything other than government money, meaning the money he stole was technically taxpayer money. [21]

After his arrest, Andrew was ordered to remain in Vermont, where he lived before purchasing the Manhattan apartment. [22] By May 2021, Andrew was free on a $500,000 bond and the defense counsel was discussing a potential disposition to the case with the government. [23]

In January 2022, the Justice Department announced that Andrew had pleaded guilty to one count of wire fraud and agreed to pay restitution to “the Charter School Network from which he stole,” and that his sentencing was pending. [24]