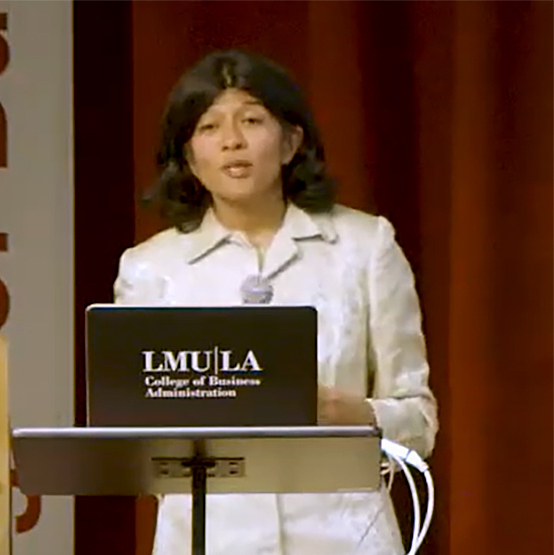 Sampriti Ganguli is the CEO of Arabella Advisors, a left-of-center philanthropic consultancy criticized for operating “dark money” groups such as Sixteen Thirty Fund, New Venture Fund, and Hopewell Fund. The funds managed by Arabella took in $635 million in revenue in 2018. [1]

Prior to her ascension to CEO in 2015 she worked in international finance and business for firms like JPMorgan Chase and CEB Inc. where she was a managing director.

Sampriti Ganguli is a graduate of Swarthmore College, where she received a BA in economics and political science. She received a Master’s in International affairs from Johns Hopkins, and an MBA from the University of Pennsylvania’s Wharton School. Ganguli worked for JPMorgan Chase, and the World Bank. She has also worked as a managing director for CEB Inc., a global technology company. [2]

Ganguli has worked as CEO of Arabella Advisors, a left-of-center philanthropic consulting group, since 2015. [3] As head of Arabella, Ganguli has overseen and directed their activities throughout a period of rapid growth and expanding financial power. Between her start as CEO in 2015 and 2018, the revenues of Arabella-managed Funds, namely the New Venture Fund, Sixteen Thirty Fund, Hopewell Fund, and Windward Fund, nearly doubled from around $332 million to $635 million. [4] [5] [6] [7]

These organizations operate by taking donations for “fiscally sponsored projects” that appear independent, but are in fact controlled by their parent Fund; examples include Demand Justice, Media Democracy Fund, and Health Care for America Now. These donations can then be sent to any number of organizations without the knowledge or review of independent watchdogs, essentially serving as a “dark money” concealment program. [8]

Ganguli has expressed a focus on targeting women donors and younger inheritors of wealth for Arabella outreach. She has also expressed a desire to focus on issues related to food systems, public housing policy, and increased leniency toward people involved in the criminal justice system. [9]