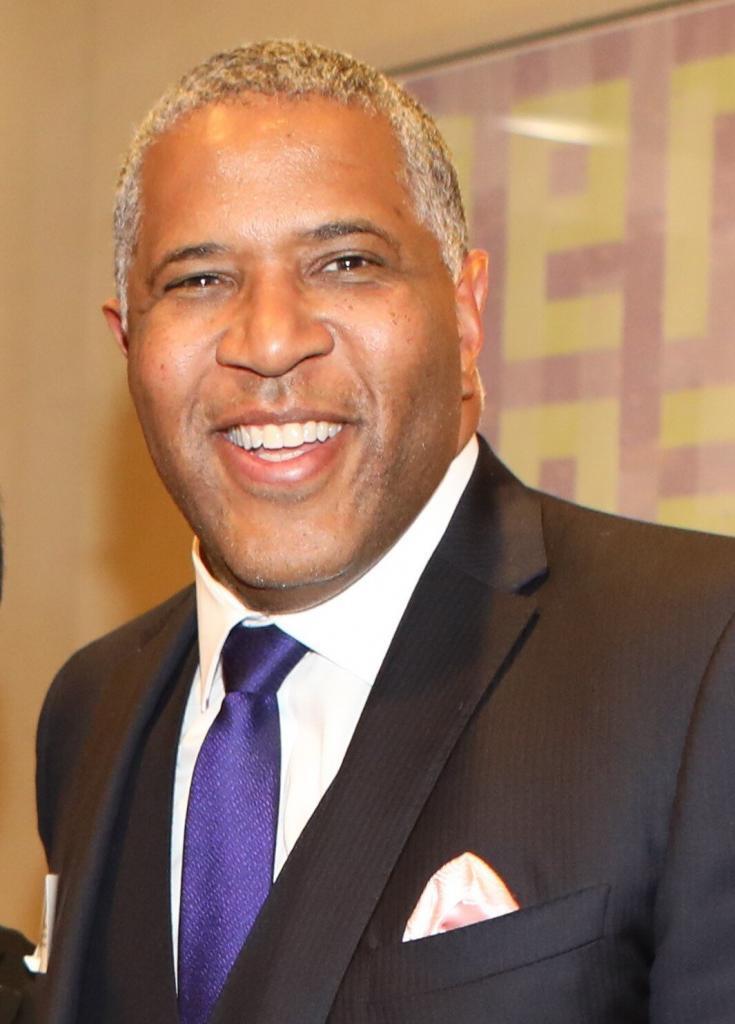 Robert Smith is a billionaire American businessman, financier, and philanthropist who amassed his fortune as the founder and CEO of Vista Equity Partners. As of April 2021, Smith was the wealthiest Black American, with a net worth of $6 billion. [1]

Smith gained public acclaim as one of the most prominent African-American philanthropists through his Fund II Foundation, which has donated tens of millions of dollars to universities, and in 2019 paid off the student loan debt of the entire graduating class of Morehouse College. [2]

In 2020, Smith was implicated in alleged tax scheme tied to offshore businesses and the Fund II Foundation and agreed to pay $139 million in penalties and forgo tax exemptions on $182 million in charitable giving. [3]

In 1985, Smith graduated from Cornell University with a degree in chemical engineering. He worked as an engineer at Goodyear Tire and Rubber Company, Air Products and Chemicals, and Kraft General Foods. [4] In 1994, Smith earned an MBA from Columbia University and pivoted his career towards business and finance. The same year, Smith began working at Goldman Sachs as an investment banker focused on investments in technology and Silicon Valley. [5]

In 2000, Smith founded Vista Equity Partners, a private equity and venture capital firm focused on technology. As of 2019, the firm has $46 billion in funding. [6]

Smith was the first Black American to sign the Giving Pledge, pledging to donate most of his wealth to philanthropic causes before his death. [7]

In 2018, the foundation gave $500,000 to the New York Times to finance the 1619 Project, a left-wing journalistic endeavor that asserts the centrality of slavery in the founding of the United States. [9]

The Foundation’s largest donations have gone to universities. In 2019, Smith attracted positive press when he pledged $34 million through the Fund II Foundation to pay off all student loan debt for the graduating class of 2019 at Morehouse College, a historically Black college. Smith pledged an additional $1.5 million to Morehouse College for scholarships and renovations. [10] [11]

After the Morehouse College donation, the Fund II Foundation co-founded the Student Freedom Initiative with a $50 million grant. The nonprofit is devoted to supporting the careers of recent college graduates in “minority serving institutions.” [12]

Robert Smith is a proponent of the “2% Solution,” a plan to close the wealth gap between white and Black Americans by encouraging all businesses in the United States to invest 2% of their profits for ten years into Black communities. Smith has cited a 2019 McKinsey Global Institute analysis which claims that closing the racial wealth gap would generate $1.5 trillion in additional GDP growth over the decade. [15]

In 2018, as part of the 2% Solution, Smith launched the Southern Communities Initiative, an effort to invest in infrastructure, businesses, and education in heavily Black communities in the southern United States. As of August 2021, the Initiative has garnered commitments from over 70 companies to invest $65 billion. [16]

In August 2020, Bloomberg News reported that Robert Smith had been under investigation by the U.S. Internal Revenue Service (IRS) and U.S. Department of Justice (DOJ) on allegations of tax evasion since 2014. Smith was accused of conspiring with billionaire software CEO Robert Brockman to conceal his income by routing proceeds from Vista Equity Partners through Caribbean shell corporations secretly owned by Smith. A portion of these funds were re-routed through the Fund II Foundation and dispersed philanthropically, thereby garnering illicit charitable tax deductions for Smith, who allegedly avoided paying taxes on $200 million in income. [17]

In October 2020, Smith entered a settlement with the DOJ to pay a $139 million penalty and surrender $182 million in charitable tax deductions. He avoided further penalties and prosecution by agreeing to assist the DOJ in its case against Brockman, which would later result in the largest tax evasion prosecution in U.S. history. [18]

Also in October, the Daily Mail reported that Smith had attempted to curry favor with then-President Donald Trump (R) and his advisors during the investigation. Earlier in 2020, Smith had initiated relationships with Trump’s daughter Ivanka Trump, then-U.S. Treasury Secretary Steve Mnuchin, and Van Jones, a CNN host believed to have close ties to Ivanka Trump’s husband Jared Kushner. In May and June, Smith made daily calls to Secretary Mnuchin regarding the COVID-19 pandemic. He also joined Ivanka Trump’s advisory committee and rented a home near Mar-A-Lago, one of President Trump’s properties. [19]