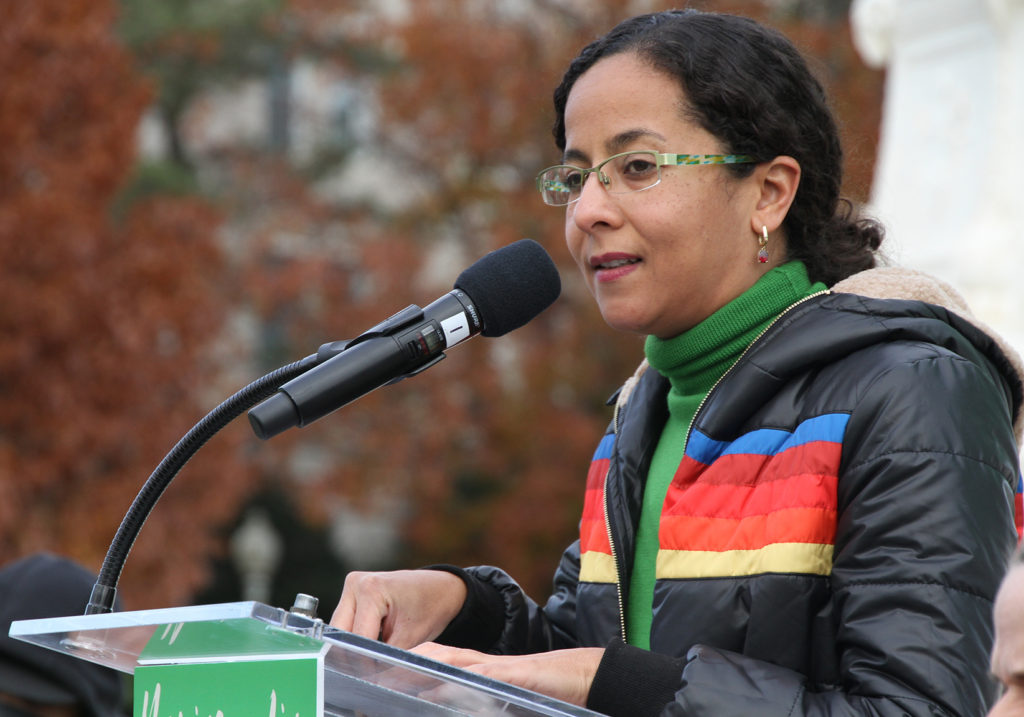 Rahna Epting has made a career as an activist for the left-leaning progressive movement. In the fall of 2019, she became the executive director of the liberal organizations MoveOn Political Action and MoveOn Civic Action after previous positions within the organization, first as leading strategic partnerships, then as MoveOn’s 2018 “Resist and Win” election program director, and then as chief of programs. [1][2]

Epting became involved with MoveOn for the first time after the September 11th attacks in 2001. She attended an anti-war march organized by MoveOn in Oregon, where she was a student in law school. She says that this was when she became a political activist. [3]

She began working at MoveOn after President Donald Trump was elected and after participating in the Women’s March in Washington, D.C. Epting then began working to support government-run healthcare within MoveOn. While working at MoveOn, Epting worked to flip control of the House of Representatives to the Democratic Party. [4]

Epting and MoveOn have taken an active role in ousting President Donald Trump from the White House in the 2020 Presidential Election. Epting claimed she will use MoveOn and its supporters to help get a Democrat elected. [5] She has said that MoveOn will create ad campaigns and conduct “grassroots accountability work” to elect a Democrat to office. [6] Epting credits advancements in technology, especially social media for her ability to have the MoveOn community organize and rally. [7]

Epting has publicly blamed Senate Republicans for choosing their party over constituents and the Constitution, leading to MoveOn committing $20 million to defeating President Donald Trump and to boost congressional Democrats in the 2020 elections. [8] MoveOn stated it will use this money for voter contact and turnout efforts, which includes mobilizing its 30,000 members, creating advertisements to discredit Republicans, and for its “team of experts.” [9]  Epting stated that her organization is committed to do anything possible to defeat President Donald Trump and for Democrats to win control of the Senate and to keep control of the House of Representatives. [10]

MoveOn is involved not only in the 2020 presidential elections, but also elections across the states for U.S. Senate races. MoveOn and Epting have set up ad campaigns against the Republican Senators in Maine, Colorado, and Arizona. The organization will then target the Senate races in Florida, Georgia, Iowa, Michigan, Nevada, New Hampshire, North Carolina, Pennsylvania, and Wisconsin. [11] MoveOn claims that its members have donated $98,600 to Democrat Mark Kelly of Arizona to defeat incumbent Republican Sen. Martha McSally. [12]

Epting, along with her organization, endorsed left-leaning progressive Representative Rashida Tlaib (D-MI) for re-election in 2020. Tlaib has been outspoken and controversial regarding her remarks, including U.S. support of Israel and discrimination of Muslims. Tlaib was a speaker at a MoveOn event in January 2020 where she spoke about impeaching President Donald Trump. When asked about Tlaib, Epting said, “she has been fearless in pushing Congress to hold this President accountable for his criminal and corrupt acts.” [13]

Since Epting joined MoveOn, especially after becoming the executive director at about the same time President Donald Trump took office, she has publicly ridiculed the president and his administration. She has rallied the MoveOn community to call Congress to demand that Congress “reins Trump in.” [14] She spoke in December 2019 at the “Impeach and Remove” rally in front of the U.S. Capitol, which advocated to impeach and remove President Donald Trump from office. [15]

Epting regularly accuses President Donald Trump of being racist[16]  and putting corporate interests above the needs of the people. [17] Epting was extremely vocal during the impeachment trial of President Donald Trump, during which the president was acquitted. Epting accused Republicans of not holding a fair trial and MoveOn placed a billboard advertisement criticizing Senate Majority Leader Mitch McConnell (R-KY). [18]

In November 2018, Epting was a guest on a panel discussion, “The Path to Reclaiming Our Democracy,” organized by the Center for American Progress Action Fund. The event emphasized that with the new Democratic House majority there was an opportunity to rein in President Donald Trump. Along with Epting from MoveOn, other panelists included left-leaning progressive leaders from End Citizens United, Planned Parenthood, Emily’s List, Run for Something, Higher Heights, Latino Victory Fund, Swing Left, Indivisible, Alliance for Youth Action, and For Our Future. [19]

Epting’s activism for the left-progressive movement spans over 15 years, particularly in areas of organized labor, leadership development, youth organizing, and democracy reform. Prior to her positions at MoveOn she held senior roles in left-leaning organizations, including Service Employees International Union (SEIU), Every Voice, Wellstone Action, and the Alliance for Youth Organizing. [20]

Epting is extremely active on Twitter, posting to her personal account nearly every day. Many of her posts are political and denounce President Donald Trump, criticize his administration, push for immigration reform, support the Democratic Party, encourage liberal voting policy, and demand government-run healthcare. [21]

Epting received her bachelor’s degree from the University of California, Davis in environmental policy analysis and planning. She was the first person to receive the Roosevelt Robinson Minority Scholarship Fund, a scholarship for law students at Lewis and Clark Law School who, in exchange, agree to live and practice law in Oregon for at least three years after graduation. [22]