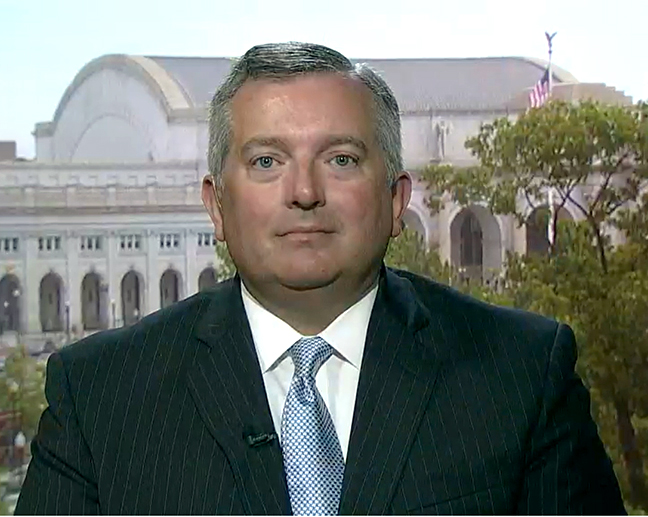 Neil Bradley is the executive vice president and chief policy officer at the U.S. Chamber of Commerce, a major business advocacy organization and the largest lobbying group in America. [1]

Bradley is the top deputy to the Chamber’s president and CEO Suzanne Clark, who took over leadership of the institution from longtime president and CEO Tom Donohue. [2] Clark and Bradley have overseen the Chamber’s controversial transition from a traditionally right-leaning organization to one that endorses and courts left-of-center companies and political officials as well. [3] Bradley said of the Chamber’s political shift, “Some people may have assumed that somehow the Chamber was an arm of a political party. They were wrong in that assumption.” [4]

Earlier in his career, Bradley served for over four years as executive director of the Republican Study Committee. He also held numerous positions in the office of then-U.S. Representative Tom Coburn (R-OK). [6]

Before joining the Chamber, Bradley founded Chartwell Policy Solutions, a research, analysis, and advisory firm focused on public policy issues. In addition to his work at Chartwell, he worked as chief strategy officer for the nonprofit Conservative Reform Network (CRN), the leading organization supporting the conservative reform movement. [7]

Bradley was hired as U.S. Chamber of Commerce vice president in 2015 and tasked with overseeing a majority of the organization’s policy divisions, including economics, employment, small business, cybersecurity, healthcare, infrastructure, and environmental affairs. [8]

In September of 2020, a staff restructuring at the Chamber resulted in Bradley taking leadership of a new unit called Strategic Advocacy, according to a memo to staff from Suzanne Clark, the chamber’s president. That division, under Bradley, also includes political affairs and government affairs, the Chamber’s campaign and lobbying arms. [9]

Along with U.S. Chamber president Suzanne Clark, Bradley has overseen the Chamber’s perceived leftward turn since 2016. That has included supporting much of President Joe Biden’s $1.9 trillion COVID-19 relief bill; applauding Biden’s decision to rejoin the Paris Climate Accords; backing the nomination of Neera Tanden, the former leader of the left-of-center Center of American Progress (CAP), for Director of the Office of Management and Budget; and expressing openness to raising the minimum wage. [10]

Prior to the 2020 election, Bradley played a key role in organizing a joint statement between the U.S. Chamber and Business Roundtable calling for “patience and confidence” as votes were counted. Bradley was quoted by Time as saying, “With tensions running high, there was a lot of concern about unrest around the election, or a breakdown in our normal way we handle contentious elections.” [11]

Following the pro-Trump riot at the U.S. Capitol on January 6, 2021, Bradley and the Chamber threatened to withhold campaign funds from politicians who denied President Biden’s election victory. In an interview following the riot, Bradley claimed that some members of Congress had “forfeited the support of the U.S. Chamber of Commerce—period, full stop” through their actions surrounding the 2020 election. The Chamber had contributed $10,000 U.S. Senator Josh Hawley (R-MO), a vocal proponent of voter fraud allegations, but Bradley stopped short of saying the Chamber would ask for that money back. [12]