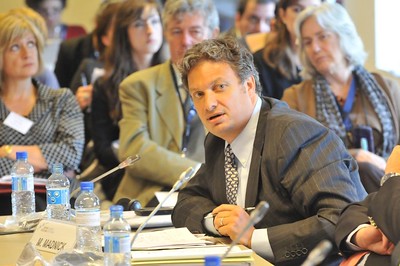 Madnick graduated from the State University of New York at Albany and has a law degree from Pace University. [1]

Previous to joining Mountain Philanthropies, Madnick was deputy director for global health policy at the Bill and Melinda Gates Foundation. In this role, Madnick worked with U.S. and international public health agencies such as the World Health Organization, especially on issues relating to AIDS research and funding. Madnick also served as senior vice president at the United Nations Foundation, founded by CNN founder Ted Turner, which raises private funds to support UN activities. [2] At the United Nations Foundation, Madnick spearheaded an effort to buy Mexican coastal properties and create a nature preserve, to prevent building and development on the lands. [3]

Prior to that, he was executive director of the Eastern and European division at CCS Fundraising, a fundraising and nonprofit strategy firm. [4]

Madnick was formerly the treasurer of the Sixteen Thirty Fund, which along with Mountain Philanthropies is managed by the “dark money” philanthropic consulting company Arabella Advisors. [5] Sixteen Thirty Fund poured $141 million into the 2018 midterm elections to support Democratic candidates; oppose the Trump Administration’s judicial nominees, including the Supreme Court nomination of Brett Kavanaugh; and revise state redistricting laws. Sixteen Thirty Fund was criticized by Politico for unleashing “an unprecedented gusher of secret money.” [6]

Madnick is a member of the executive committee of Represent Justice, a criminal justice reform organization founded by a group of hip-hop artists. [7]  He is also a board member of Refugees International, a left-of-center advocacy group that recommends refugee resettlement and aid policies to the U.S. government as well as to foreign governments and the United Nations. [8]

Madnick is also a senior advisor to the Skoll Foundation, which has more than $586 million in assets and is a leading organization funding left-progressive advocacy causes, especially in the area of environmentalism and climate change. [10]

In addition, Madnick sits as a member of the Museum Board of Overseers at the Corcoran Gallery of Art and the Board of Directors for Blue Planet Run Foundation. [11]