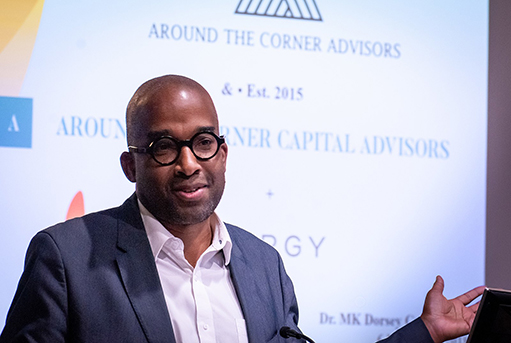 Michael Dorsey is an environmentalist activist and writer, former board member for of the environmentalist group Sierra Club, and co-founder of the far-left advocacy group Sunrise Movement. Sunrise Movement is the lead organization behind the “Green New Deal,” a policy program critics have called a “radical, top-down, socialist makeover of the entire U.S. economy.” [1]

Michael Dorsey is a career left-wing environmentalist activist who has held positions with activist groups, in academia, with activist corporations, and in the federal government.

He was formerly an environmental studies professor at Dartmouth College. He was a guest faculty at Wesleyan University in the United States. Abroad, he was on the faculty at University of Witwatersrand at South Africa, Tekniska Hogskolan in Sweden; and Erasmus University’s Erasmus Research Institute of Management (ERIM) Sustainability and Climate Change Research Unit in The Netherlands. [2]

In 1992, he began working for the U.S. State Department’s delegation to the United Nations Conference on Environment and Development, known as “The Earth Summit.” He served on President Bill Clinton’s Council on Sustainable Development from 1994 to 1996. Dorsey was an environmental policy adviser on Barack Obama’s 2008 presidential campaign. [3]

From 2010 through 2014, he served on the national advisory committee of the Environmental Protection Agency. United Nations Conference on Trade and Development named Dorsey in 2014 as an advisor on climate, energy sustainability and small-island developing states. [4]

Dorsey is a member of the Club of Rome. He co-founded IslandsFirst.org. [5] He was also a co-founder of the Center for Environmental Health in 1997, based in northern California. [6]

Dorsey was a member of the national board of directors for the Sierra Club for 11 years. He also served on the board of Food First. [7]

Dorsey is an investor and co-founder of the Around the Corner Capital, an energy and finance advisory firm. The firm has does consulting work with California Clean Energy Fund; Silverleaf Partners; the Royal Bafokeng Holdings in South Africa; Univergy, a solar company that operates in Japan and Spain; the World Bank; and various environmentalist energy companies. He was also a co-founder of the division in India, Univergy Think Green . [8]

Dorsey rejected the push by Democratic politicians for a carbon tax or a similar “cap-and-trade” scheme, arguing “the right to pollute is a commodity bought and sold in a market” and an “untested economic experiment.” [9] He also said cap and trade did not work well for the European Union. Dorsey opposed the move by the states of Arizona, California, Washington, Oregon and New Mexico creating the Western Regional Climate Action, claiming it was insufficient. [10]

His conviction that more radical measures are needed led Dorsey to co-found the Sunrise Movement in 2013 with Evan Weber and Matthew Lichtash, both Wesleyan students, with support from the Sierra Club and its affiliated Sierra Club Foundation. E&E News reported that the Sunrise Movement sought to “undertake a massive program to fight global warming — in the same way that former President Franklin D. Roosevelt used the New Deal to combat the Great Depression.” This developed into the Green New Deal, a radical proposal to overhaul the U.S. economy. [12]