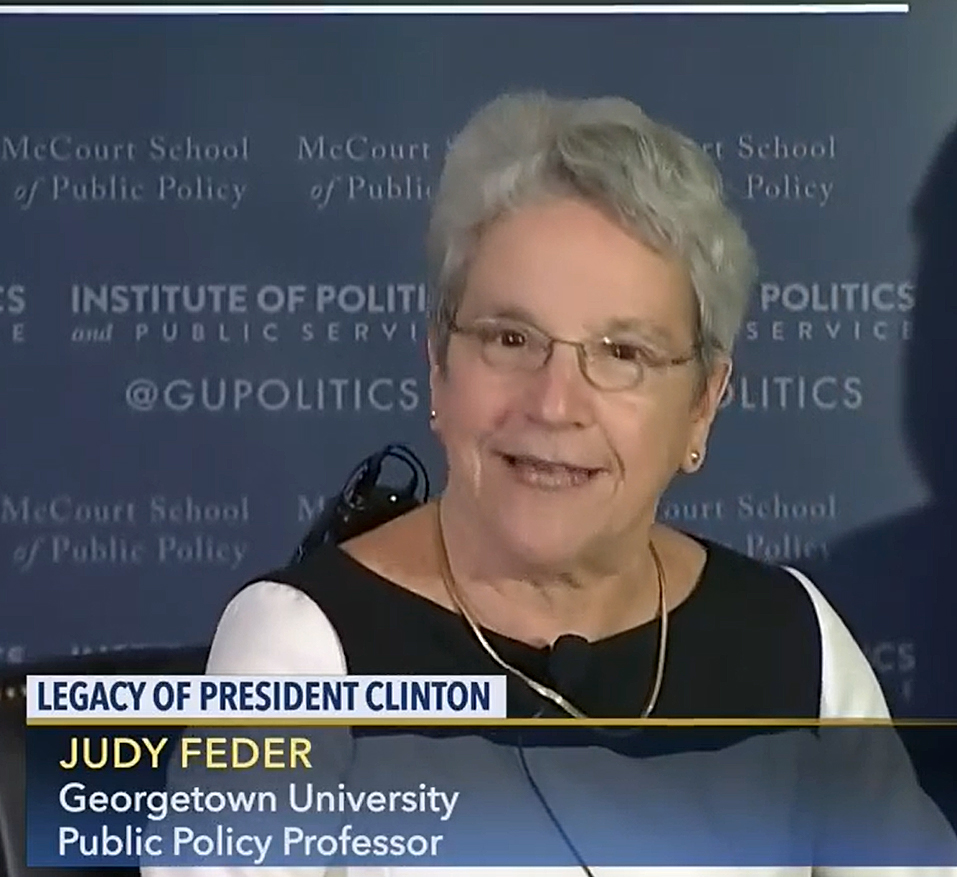 Judith “Judy” Feder is a professor of public policy at Georgetown University in Washington D.C. and has served in various left-wing organizations. She formerly served in the Clinton administration in the Department of Health and Human Services.

She also currently serves as a fellow at the left-of-center Urban Institute. She also serves on the board of directors of the Center for American Progress Action Fund where she was a former fellow. Feder has also made two unsuccessful runs for the U.S. House as a Democrat.

She began her policy career at the center-left Brookings Institution. She then moved to the Urban Institute and later was hired by Georgetown University in 1984. She studied healthcare-related issues such as the uninsured, Medicare, Medicaid, and long-term care. [2]

In 1989, she was appointed as the staff director for the congressional Pepper Commission, which was chaired by then-U.S. Senator John D. Rockefeller IV (D-W.V.). [3] The bipartisan commission debated healthcare policy and released recommendations calling for minimum coverage standards for employer-provided health insurance, reforming Medicaid by shifting responsibility from the state to the federal level, and creating government-run insurance for long-term care. [4] The Pepper Commission contributed to the healthcare debate in the early 1990s.

After the election of President Bill Clinton, Feder joined the administration as the principal deputy assistant secretary for planning and evaluation at the Department of Health and Human Services. While serving in the Clinton administration, she was a leading architect of what became known as Hillarycare. [5] Feder left the administration in 1995, when she returned to Georgetown University.

In 1995, Feder returned to Georgetown University as a research professor of public policy. In 1999, she became dean of Georgetown’s Public Policy Institute. During her tenure as dean, she transformed the institute into one of the nation’s premier public policy schools. She would serve as dean until 2008. [6]

She stepped down as dean in 2008 and joined the Center for American Progress Action Fund as a fellow. [7] In 2009, she encouraged Democrats to pass Obamacare, claiming that the failure to pass Hillarycare cost Democrats Congress in 1994. [8] Democrats passed Obamacare and lost Congress in 2010 due to widespread public opposition to the proposal.

In 2006, Feder took a leave from Georgetown University. She then ran for the U.S. House of Representatives for Virginia’s 10th District in northern Virginia. She won the Democratic nomination and squared off against then-Rep. Frank Wolf (R-Virginia). She campaigned against Wolf’s vote for and support of the Iraq War, tax breaks for oil companies, and support of a Medicare drug program. She campaigned on a platform of withdrawing from Iraq and more government money for environmentalist energy sources. [10] Feder lost, 57.32% to 40.96%. [11]

In 2008, she ran again for the U.S. House. Once again, she won the Democratic Party primary to face Wolf. However, in a year where Democrats won the presidential election and the U.S. Senate election in Virginia, she actually did worse than her bid in 2006. She was defeated by Wolf 58.9% to 38.9%. [12]