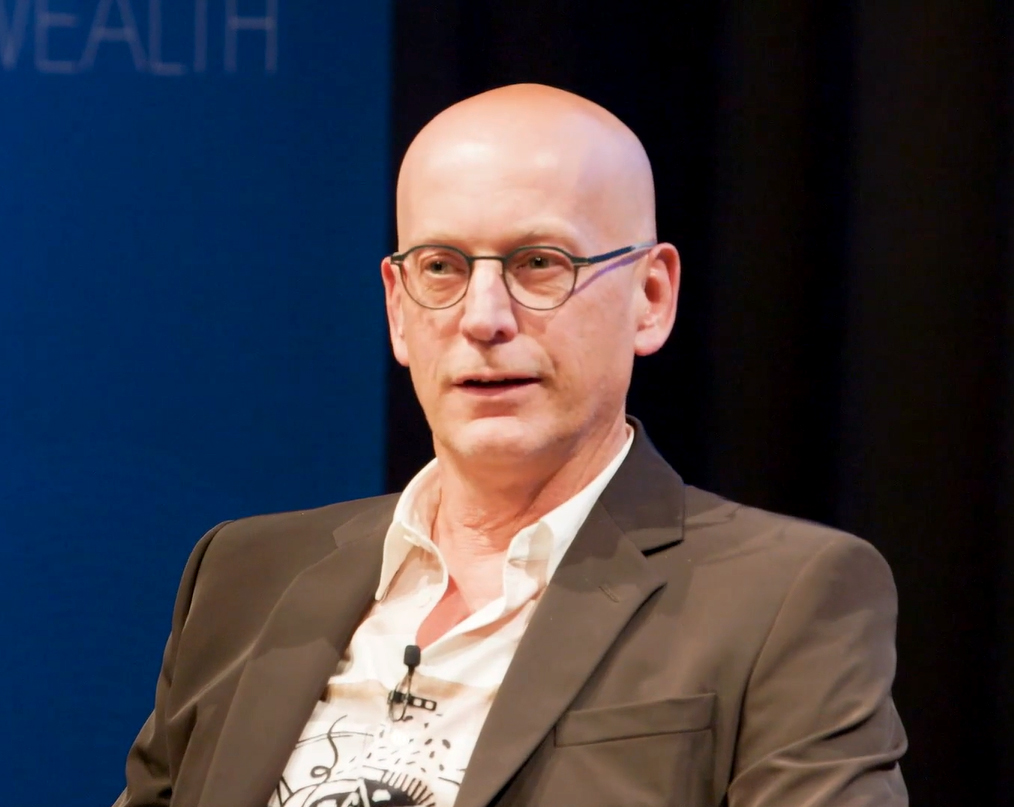 Jon Stryker is an environmentalist and social-liberal donor, heir to the Stryker medical device fortune, and the brother of major left-liberal donor Pat Stryker. He is founder and president of the Arcus Foundation, which funds left-of-center groups that promote LGBT interests and for preservation of apes.

Jon Stryker is an LGBT activist and one of the heirs to the Stryker medical device fortune. Forbes estimated his net worth at $3.9 billion as of August 2019. [1] He lives in New York. [2]

Stryker graduated Kalamazoo College in 1982 with a bachelor’s degree in biology. He earned a master’s degree in architecture from the University of California, Berkeley. He’s a registered architect in Michigan. [3] Stryker is the president of Depot Landmark, which focuses on rehabilitation of historic buildings. [4]

Stryker’s grandfather Homer Stryker founded Stryker Corp., a medical device and technology company that the family sold for $12.4 billion in 2017. [5] Jon Stryker is the brother of Ronda Stryker and Patricia Stryker. [6] The Stryker family has been ranked as the 31st wealthiest family in the United States. [7]

Stryker married his longtime partner Slobodan Randjelovic in December 2016. [8] He is previously divorced with two children. [9]

The National Gay and Lesbian Task Force honored Stryker with its Creating Change Award in 2008. Stryker said, “It’s about supporting people who are trying to live in peace as openly gay or lesbian or transgender people.” [14]=

Ballotpedia identified Stryker, a donor to several Democratic politicians, as a “top influencer by state” in 2016. [15]

The Stryker family created the Coalition for Progress political action committee, which became the largest PAC in Michigan’s history as of 2006. Among the candidates the PAC bankrolled was former Michigan Gov. Jennifer Granholm, a Democrat. [16]

When the family still owned 30 percent of the company, Jon Stryker was a public advocate for the passage of the Affordable Care Act, better known as Obamacare. However, Stryker Corp. announced in 2012 it would be cutting jobs by 5 percent—or 1,170 jobs—as a means to deal with rising costs from Obamacare. The company primarily expected to take a financial loss from the medical device tax. [17]

During the legislative battle over Obamacare, Stryker gave $2 million to Priorities USA Action, a Democratic-aligned political action committee. In 2008, he spent a combined $66,000 on the election of Barack Obama for president and on the Democratic Party. [18]

Stryker has donated $550 million to causes during his lifetime, according to Forbes, and serves on numerous boards for nonprofits. [19]

Stryker first became a member of the Global Philanthropists Circle in 2011. [20]

Stryker gave $20 million to Kalamazoo College to establish the Jon L. Stryker Future Leaders Scholarship Program. The scholarship program aims to help students with financial need and to increase diversity on campus. The program began in the 2018-2019 academic year with $2 million in scholarships, and will spend the grant money over the course of 10 years. [21]

He previously donated more than $10 million to the college’s diversity enrollment efforts. The Arcus Foundation gave $25 million to establish the Arcus Center for Social Justice Leadership at the college. [22]

Stryker is the chairman of the board of directors for Save the Chimps, an organization based in Ft. Pierce, Florida. [24]

He is also a board member of the Museum of Modern Art (MoMA) in New York City. He was also named as a Patron of Nature by the International Union for Conservation of Nature. [25]

In 2016, Jon and his sister Pat gave $10 million to the Equal Justice Initiative to establish the Memorial to Peace and Justice, honoring the victims of racist lynchings across the United States. [26]