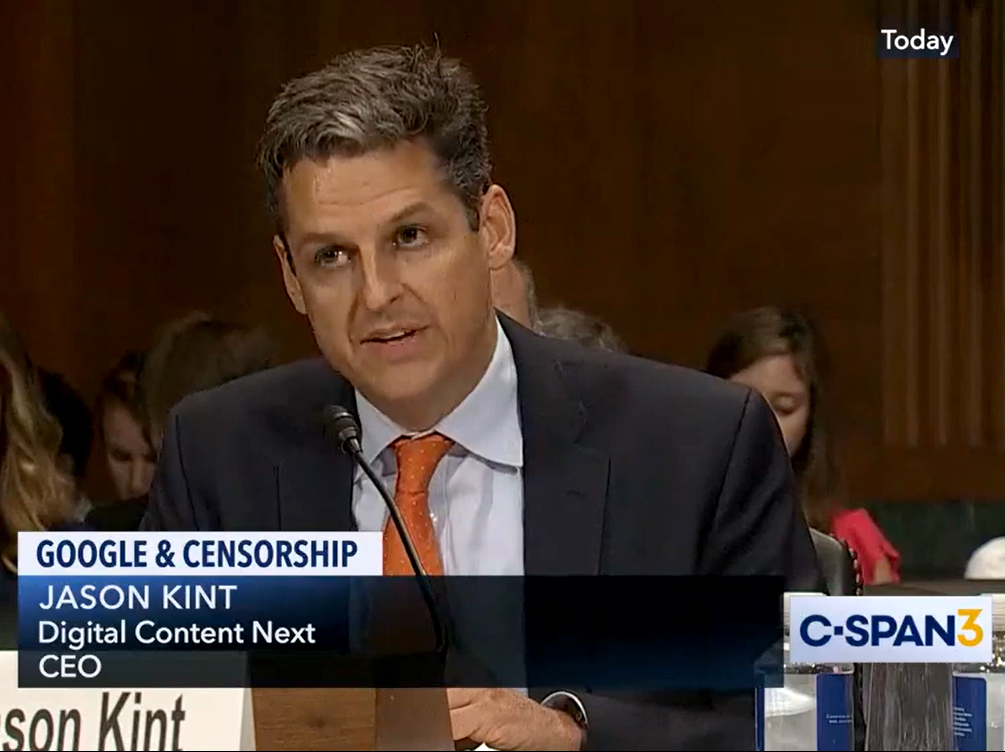 Jason Kint is the chief executive officer of Digital Content Next (formerly the Online Publishers Association), a trade group for digital content producers. Kint is an outspoken critic of Google and Facebook, which he has labeled a “duopoly,”[1]  suggesting that federal regulators may need to forcibly break the two companies apart.[2] Kint has also endorsed international regulations meant to weaken the companies’ market position.[3]

After the 2016 election’s “fake news” controversy, Kint suggested that Google, which had largely avoided the controversy, be subject to the same type of Congressional investigations as Facebook.[4] He also demanded that the Federal Communications Commission (FCC) impose transparency regulations on the two companies,[5] and demanded that the companies devote significant financial resources toward developing solutions to eliminate fabricated content.[6]

Jason Kint was born outside Columbus, Ohio.[10] He attended Columbus’ St. Charles Preparatory School and then graduated from Washington University in St. Louis with degrees in mathematics and marketing in 1996.[11]

From 1998-200 Kint worked as an executive producer for Times Mirror Magazines, Sporting News’ parent company, where he developed web content for the company.[16]

Kint rejoined Sporting News from 2000 through 2007. During this time he helped build out a premium content platform and oversaw the 2005 re-design of the companies website.[17]

From 2007 through 2013, Kint worked as general manager of CBS Interactive Sports Division in Fort Lauderdale, Florida.[18] In this role he oversaw programming, product development, marketing, technology and general administration of CBSSports.com (formerly known as CBSSportsline.com). [19]

While at CBS Sports, Kint was named a top 10 Sports Game Changer by HuffPost in 2009 and a “digital power 50” member by the Hollywood Reporter[20] for his work in creating an on-demand streaming service for the NCAA basketball tournament.[21] In 2011, Sports Business Daily named Kint to its “40 under 40” crediting him with building a profitable premium fantasy sports product.[22]

In September 2004, Kint re-branded OPA as Digital Content Next (DCN)[25] to represent the fact that organization’s membership was exclusively comprised of content-generating companies and to distinguish those members from other competing online companies.[26]

According to Kint, DCN is a trade association advocating for the policy demands of large-scale digital content companies[27] and against policies of major digital advertising intermediary companies such as Facebook and Google.[28]

In 2015, Kint labeled Facebook and Google a duopoly within the digital advertisement industry.[29] In a 2017 blog post, Kint argued that despite the fact that the Google and Facebook both offer their products for free the companies can still be held in violation of antitrust laws. Kint touted European fines against Google and anti-trust investigations by multiple states as proof that the two companies were a duopoly. [30]

Kint has also argued the both Google and Facebook should be required to provide more transparency about their internal operation. [31] Kint argues that this disclosure would detail how much money the two companies allocate to content producers, implicitly allowing those content producers to negotiate for a larger share of advertising revenues. [32]

In November 2016, Kint wrote a letter to the CEOs of Facebook and Google criticizing the companies’ planned efforts to identify fake news and calling for them to voluntarily allocate more financial resources toward creating processes that would eliminate the publication of false information.[33]

Kint used Russian interference in the 2016 election to call for broad federal transparency mandates related to Google’s and Facebook’s financials and specifically singled out information relating to content producers payments. [36]

In 2017, Kint wrote an op-ed in support of the European Union (EU) regulatory scheme known as the General Data Protection Regulation (GDPR). Kint lauded the GDPR for creating rules that require explicit consumer consent before a company can collect and use web-user data, and imposing significant financial penalties against any company that did not comply with the new regulatory rules.[37]According to Kint the EU’s new rule “should be applauded” for potentially changing how Google and Facebook do business.[38]

In an April 2018 interview Kint supported the GDPR and ePrivacy regulations touting the fact the regulations would “likely weaken the aspects of Google and Facebook that make them so dominant.”[39]

Kint frequently criticizes ad-blocking, the process where users install software designed to prevent the display and delivery of advertising, as his main motivation for supporting a wide-array of left-of-center regulatory mandates. [40] [41] According to Kint, ad-blocking significantly harms the financial viability of his association’s members “because it prevents them from monetizing the audiences they attract.”[42]

As a result, Kint has often called for strong federal administrative rules regulating consumer data collection in order to ensure that consumers do not install ad-blocking software.[43]

In 2015, Kint bemoaned the fact that “there was very little activity” on President Obama’s Privacy Consumer Bill of Rights.[44]

In 2016, Kint wrote a letter to then-FCC Chairman Tom Wheeler urging the FCC to create new requirements regulating how broadband providers collect and use consumer data, and which prevents those providers from collecting data when specific consumers indicate their preference against such data-collection.[45]

In his July 2017 comments to the FCC, Kint urged the regulatory body to keep the net neutrality rules enacted under President Barack Obama.[46] Kint argued that the FCC rules were necessary to provide clear regulatory limits on how broadband Internet companies could conduct their business.[47]

In 2016-2017, Verizon announced plans to combine its subsidiaries AOL and Yahoo as part of a new content-generation and data-collection company called Oath, which could compete with Facebook and Google.[48] Kint has taken numerous stances against this plan and tenuously arguing that it will increase users employment of ad-blocking, which in harms his member organizations.[49]

Then in 2017, Kint criticized Verizon’s plan to create Oath labeling it “very concerning” because the company would use “billions of low quality impressions” to identify users’ behavioral and location information in order to create behaviorally targeted content.[52]

Similarly, Kint also speculated that after the repeal of net neutrality regulations, Verizon would use its Oath subsidiary to create a consumer choice “chokepoint” through which the Verizon would prioritize Oath’s over that of competing content producers.[53]

In 2016, Kint contributed $5,400 to Hillary Clinton’s presidential campaign.[54] Kint advocated for Clinton’s election during the campaign.[55]

In 2016, Kint participated in Hack the Debate, a hackathon intended to design ideas on how to bring millennials and larger numbers of Americans into the presidential debate process. The digital directors for both major political parties as well as political executives from Google and Twitter joined Kint.[56]