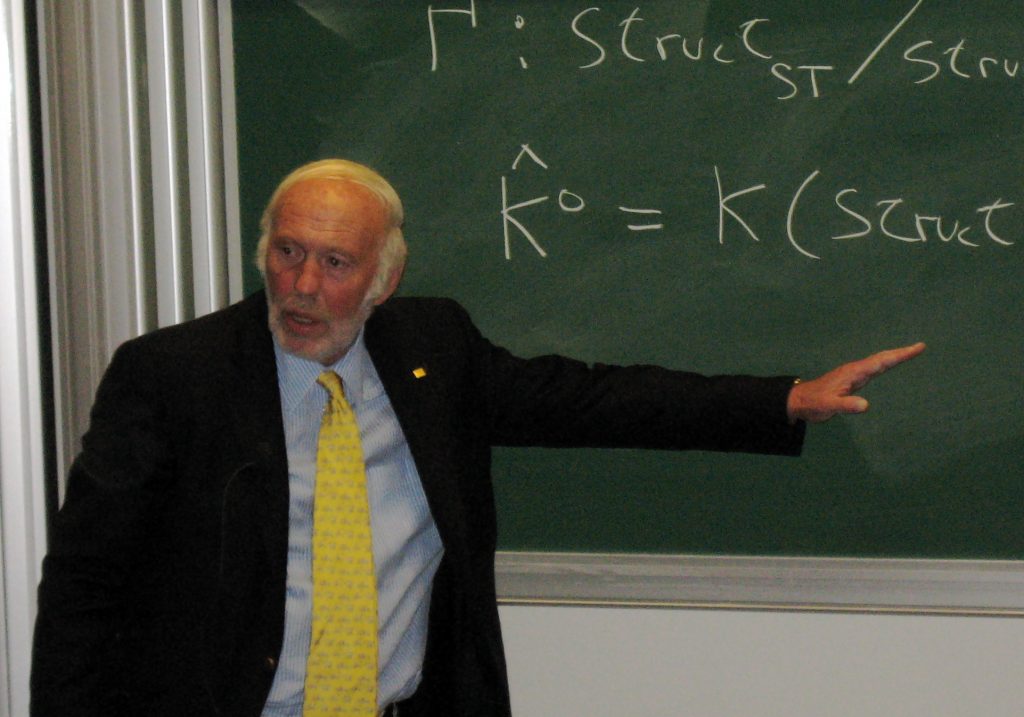 James Simons is a billionaire retired manager of the hedge fund Renaissance Technologies and mathematician. Forbes lists Simons the second-highest-earning hedge fund manager in 2018. [1] He is a top donor to liberal causes and the Democratic Party. [2]

Simons was born April 25, 1938, in Newton, Massachusetts. [3] He is regarded as a legendary mathematician, and since his retirement in 2009, he has dedicated much of his philanthropy to scientific research funding. His private foundation, the Simons Foundation, is one of the wealthiest foundations in the country. [4]

Simons was born to Matthew and Marcia Simons on April 25, 1938, in Newton, Massachusetts. His first job was in his father’s shoe factory. [5] In 1958, he received his bachelor’s degree from Massachusetts Institute of Technology and went on to earn his Ph.D. in mathematics from the University of California, Berkeley. [6]

Stony Brook University appointed Simons head of its mathematics department in 1968. After spending a decade in academia, Simons founded Renaissance Technologies. Using quantitative models based on statistical analysis, Renaissance Technologies surged ahead of its competitors, many of whom still relied on human decision making. The firm’s most profitable portfolio, the Medallion Fund, which is available only to employees, is one of the most profitable investment funds in history. [9]

In 1994, Simons and his second wife, Marilyn, co-founded the Simons Foundation. The charity was created to fund scientific research, with a special focus on autism research. [10]

Simons founded a second charity, Math For America, in 2004, which seeks to promote and retain math teachers for New York’s secondary schools. [11]

Simon’s son Nicholas died drowning at 24 years old on a trip to Indonesia. The Nick Simons Institute was founded in his honor, and helps to support improved healthcare in Nepal, where Nicholas was working at the time of his death. Simons divorced his first wife, Barbara, in 1974. [12]

Simons has consistently been one of the Democratic Party’s top donors. He contributed a total of $9,880,700 to Democratic candidates for federal office and other left-wing federal political committees in 2012. [13] In each election cycle since, he has been one of the top ten individual contributors to federal candidates. He donated a total of $26,788,250 during the 2016 elections, of which $16 million went to Hillary Clinton’s Priorities USA Super PAC. [14]

Simons donates the majority of his support to Democratic leadership-aligned groups, giving most of his money to Priorities USA, Senate Majority PAC, or House Majority PAC. However, he has also been a major donor to groups such as Planned Parenthood Votes, Women Vote!, and Immigrant Voters Win. [16]

Simons tends to avoid giving interviews; those political opinions he has expressed are generally conventionally liberal. In an interview with CNBC he described Trump using a financial analogy, and said he was a “bad investment” because of his personal volatility. Simons has said that he would like to see more investment in U.S. infrastructure, and increased funding for scientific research. [17] Similar other billionaire left-of-center donors, he supports closing tax loopholes that he himself has exploited. [18]

Simons family office, Euclidean Capital, and its employees donated a total of $16,418,900 to Democratic candidates during the 2018 midterms. [19]

Toward the end of President Barack Obama’s administration, Jim and Marilyn Simons attended a fundraising dinner at the White House. They gave $340,000 to the Obama Foundation in 2014, and $330,000 in 2015. [21] The Simons’ were among the first donors to contribute to President Obama’s library. [22]

Simons and his wife Marilyn, along with his three children, are all highly involved in charitable and political giving. His daughter Liz and her husband Mark Heising run their own foundation, the Heising-Simons Foundation, which funds childhood education, science, and climate change research. Simon’s son Nathaniel runs another climate change non-profit, the Sea Change Foundation. His step-daughter Audrey founded the Foundation for a Just Society, which advocates for women and LGBT people. [23]

In 2009 the Wall Street Journal reported that investors had questioned Simons over the discrepancies between the public and private hedge funds at Renaissance Technologies. The Medallion Fund, available only to employees, earned 80% that year, while the public fund lost 17%. Similar results were reported in 2008. Within months of the Wall Street Journal story, Simons announced his retirement. [24]

The Guardian broke the story in 2017 that James Simons had hidden $8 billion away from U.S. taxes in an offshore account in Bermuda. He, along with a long list of the world wealthiest people, was named in the Paradise Papers, a leaked document cache concerning offshore financial arrangements. In this case, Simons did not act illegally, but it struck many readers as hypocritical that one of the Democratic Party’s largest donors would go to such lengths.

The so-called Lord Jim Trust was dissolved in 2010. Lawyers told Simons donating the money to charity was the best way to avoid taxes. The pile was split up among the charities started by Simons and each of his three children, including the Simons Foundation.[25]

Renaissance Technologies engaged in a deceptive reporting practice that it and several other hedge funds used to skimp on federal taxes. By describing certain earnings as long-term capital gains, Simons’s fund reportedly saved itself $6.8 billion in taxes over the course of a decade. The bipartisan Permanent Subcommittee on Investigations did not accuse the hedge fund of acting illegally, but described its actions as “abusive.” [26]