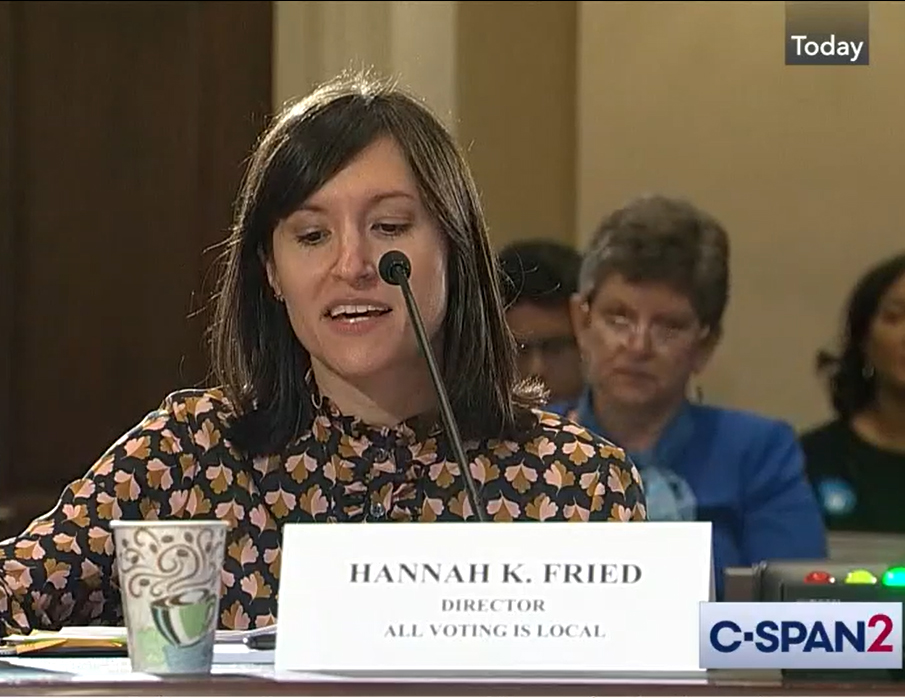 During the 2020 election cycle, Fried was an adamant supporter of loosening voting security ostensibly due to the COVID-19 pandemic, advocating for the widespread use of early voting and mail-in ballots. [3] Fried also dismissed any voter security measures as illegitimate, calling on precincts to allow mail-in ballots to be counted even if they were received after the submission deadline, to eliminate signature checking on mail-in ballots, and to permit voters who submitted a mail-in ballot incorrectly to vote again on election day. [4] [5] [6]  Fried has supported the continued use of such practices even after the end of the COVID-19 pandemic. [7]

In the lead-up to the 2020 election, Fried was a frequent proponent of mail-in voting, advocating for those in power to make it possible to process “millions” of mail-in ballots and “get ballots to voters,” in support for widespread absentee voting. [8] Fried also dismissed efforts to purge voter rolls of inactive or ineligible registered voters, claiming that they disproportionately disqualified young people and ethnic minorities. [9]

In October of 2020, Fried appeared with the director of the left-of-center Lawyers’ Committee for Civil Rights Under Law on a panel discussing voting. Fried encouraged young people to volunteer as poll workers and to “lean on state election officials” to organize voter registration campaigns. Fried also encouraged businesses like restaurant and grocery delivery services to provide communications about the election[10]

Fried called lines for in-person voting “unacceptable” and criticized the disqualification of absentee ballots that arrived after state deadlines. [11] Fried demanded that states extend their deadlines for accepting mail-in ballots until after election day and claimed that ballots submitted incorrectly should not be disqualified automatically, instead arguing that voters should be allowed to provisionally vote again in-person on election day if their mail-in ballots were rejected. [12] [13] Fried further dismissed even minimal security measures for mail-in ballots, such as signature matching, calling the measure “fundamentally unfair.” [14]

On October 17, 2019, Fried testified at a hearing of the House Administration Subcommittee on Elections focused on voting rights and election procedures. During her testimony, Fried argued that that the 2013 Supreme Court decision in Shelby v. Holder “gutted” the Voting Rights Act by allowing local and state officials to have control over their voting rules and regulations in certain jurisdictions that had previously been subject to federal oversight. Without this oversight, Fried argued that states and localities had closed large numbers of polling locations, which allegedly led to an increased use of provisional ballots by minority and low-income voters that are more likely to be rejected. [17]

Fried claimed that the election protections were as necessary today as they were during the civil rights movement, while alleging that voters faced “insurmountable obstacles” to voting in 2018, Fried also criticized other election security measures, such as mail-in ballot verification and purging voter rolls, claiming that they made it more difficult for ethnic minorities to vote. Fried dismissed all voter integrity laws, claiming that voter identification requirements targeted African Americans with “almost surgical precision,” and concluded her remarks by calling on Congress to decrease election security measures by restoring the unconstitutional provisions struck down in the Shelby decision. [18]

In her written testimony, Fried recommended the passage of the Voting Rights Advancement Act, a bill that would restore the requirement for certain states and localities to receive pre-clearance from the federal government to make election changes. She also recommended that any jurisdiction that receives federal funds be required to conduct voter impact studies anytime there is a change in election administration procedures. Similarly, Fried urged that any jurisdiction that receives federal funds should be required to reach out to voters who are scheduled to be purged from registration rolls ahead of time. [19]

Fried also made several suggestions that would appear to federalize the election process, including congressional legislation that would make uniform standards for counting provisional ballots, mandate same-day and automatic voter registration in all states, prohibit states from restricting mail-in voting, impose a mandatory 15 consecutive days of in-person early voting, and require that wait times at polling places never exceed 30 minutes. [20]

During Fried’s third year at Harvard Law School, she began volunteering with former President Barack Obama’s 2008 campaign on voter efforts. Upon graduation, she joined the Obama campaign full-time. After the campaign concluded, Fried began working for the Democratic National Committee (DNC) as the deputy director and deputy general counsel for voter protection. In 2012, she joined the Obama 2012 campaign as the director of voter protection in Florida. In 2016, she ran the national voter protection program for the Hillary Clinton presidential campaign. [21] Fried also runs Access Democracy, another left-of-center voting organization, under the Leadership Conference. [22]