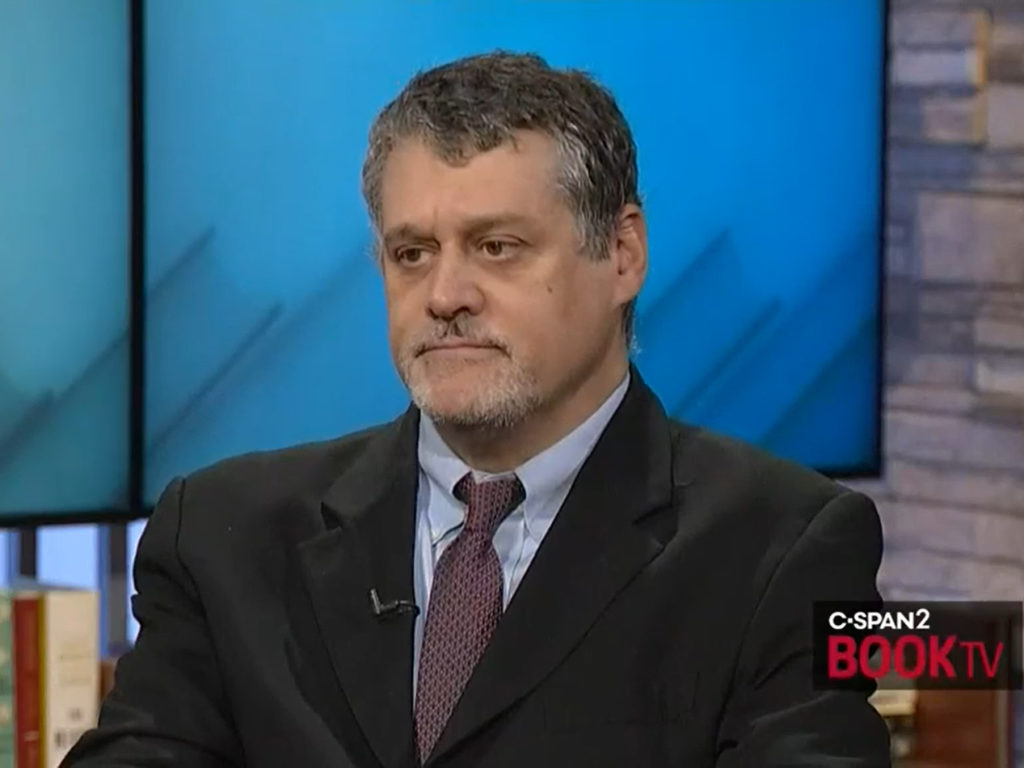 Glenn Simpson is an American journalist, corporate researcher, and political opposition researcher. He is a founding partner at Fusion GPS, the research firm which produced the controversial and unverified document commonly known as the “Steele dossier” containing allegations against then-Republican presidential candidate Donald Trump and his campaign during the 2016 election cycle, including allegations that the campaign had colluded with Russia. [1]

During Simpson’s tenure with Fusion GPS, the firm also worked for clients including the Planned Parenthood Federation of America. It also investigated a major supporter of the 2012 presidential campaign of Republican candidate Mitt Romney. Prior to joining Fusion GPS, Simpson spent more than a decade as a reporter with the Wall Street Journal. [2]

Simpson and his fellow Fusion GPS co-founder Peter Fritsch have denied any wrongdoing related to the unproven allegations in the Steele dossier, downplayed the factual errors in it, and blamed Republican politicians for the controversy the dossier incited. They have also denied that the document was released to the public by them personally or Fusion GPS as an organization and published a book about the information they claim to have uncovered. [3] [4]

Glenn Simpson received a degree in journalism from George Washington University, after which he worked as a reporter for the Washington, D.C. political media outlet Roll Call. He then became an investigative reporter for the Wall Street Journal for 14 years. [5] As a journalist, Simpson built a reputation for investigating corruption, sometimes including that which was related to Russian operatives. [6] [7] [8]

Upon leaving journalism, Simpson co-founded the investigative consultancy SNS Global, LLC. He was also a senior fellow for the International Assessment and Strategy Center. [9] [10]

In 2009, Simpson reportedly began working on behalf of Sheik (Prince) Khalid bin Saqr al-Qasimi, an exiled member of the United Arab Emirates royal family, through SNS Global. The prince, who had been ousted from the Emirates’ line of succession, was accusing the leaders of UAE constituent emirate of Ras al Khaimah collaborating with the government of Iran to help it bypass international trade sanctions. [11] [12]

Glenn Simpson and fellow former Wall Street Journal alumnus Peter Fritsch launched Fusion GPS in 2011. The firm provides virtually no information on its website, which is a single page with a mission statement that also claims that non-political private sector clients are its focus. [13] Simpson’s LinkedIn profile indicates he left the firm in 2020. [14]

Fusion GPS has worked for political organizations and causes, most prominently those affiliated with the Democratic Party and the political left. In 2012, the firm targeted Idaho businessman Frank VanderSloot, who had made a $1 million donation to a political action committee supporting Republican presidential candidate Mitt Romney. While neither Simpson nor Fritsch have ever disclosed who paid them to investigate VanderSloot, the Wall Street Journal reported that the businessman had been a target of the Obama 2012 presidential campaign for his opposition to same-sex sexual relationships. Similarly, Simpson claimed that VanderSloot’s views on LGBT interests made him a “legitimate” target for his firm’s investigation. [15]

In 2015, Fusion GPS conducted a public relations campaign on behalf of the Planned Parenthood Federation of America in an attempt to discredit a series of undercover videos recorded in California which suggested that the abortion provider was selling body parts of fetuses to medical companies. The firm’s report claimed that the videos “contain intentionally deceptive edits, missing footage and inaccurately transcribed conversations.” [16]

Fusion GPS also worked with BakerHostetler, a firm representing Prevezon, a Russian company based in Cyprus. The company was employing the firm to defend against a Department of Justice investigation into alleged money-laundering activities. Josh Rogin of the Washington Post reported case was settled in 2017 “with no admission of guilt by Prevezon.” [17]

For more on allegations that Donald Trump and members of his presidential campaign colluded with the Russian government, see Trump-Russia Collusion Claims.

In January 2017, less than two weeks before the inauguration of President Donald Trump, multiple news outlets began reporting on a dossier prepared by Fusion GPS which contained lurid and unverified allegations about Trump’s personal activities, including during the time he spent in Russia. Subsequent reporting revealed that the firm had originally worked for the conservative media outlet Washington Free Beacon, [18] and subsequently began working with Marc Elias, a lawyer who worked in association with the unsuccessful campaign of Democratic Party presidential candidate Hillary Clinton. Fusion GPS had hired Christopher Steele, a former British intelligence officer, to compile the dossier, which the Department of Justice partially relied on to justify its warrant to surveil an associate of Trump. However, Steele later admitted that some of the allegations in the document had not been properly investigated and verified, and Trump himself has strongly condemned the dossier as a hoax. The Russian government has also denied Steele’s claims. [19]

Simpson was one of several Fusion GPS associates whose testimony was sought by Congress following the release of the dossier. However, he invoked his rights not to testify in response to a subpoena issued by the House of Representatives’ Judiciary Committee. [20] Mainstream media outlets such as ABC News have specifically identified Simpson and Fritsch as having hired Steele to investigate Trump during the 2016 presidential campaign. [21]

Simpson has said that releasing the dossier to the public “horrified” him. “As Peter [Fritsch] puts it, ironically, we’re best known for something that we absolutely never do,” he told ABC. [22]

Simpson and Fritsch have portrayed themselves as victims of Trump, Republicans in Congress, and right-of-center media. In January 2018, they wrote an op-ed for the New York Times in which they claimed they had tried to “correct the record” regarding inconsistencies in the dossier, and described criticisms of their work, their motivations, and their choice of business partners as “mendacious conspiracy theories.” [23] In 2019, Fritsch and Simpson released a book, titled Crime in Progress, which attempted to present a favorable view of their investigation into Trump and the ensuing controversy. [24] The same year, the two gave an interview to NPR in which they claimed that the dossier was fundamentally accurate despite the errors in it. [25]

In 2022, Fritsch and Simpson opposed an investigator’s request for documents about their work to link Trump to Russia. [26] A judge ordered Fusion GPS to produce a number of documents in May of that year. [27]