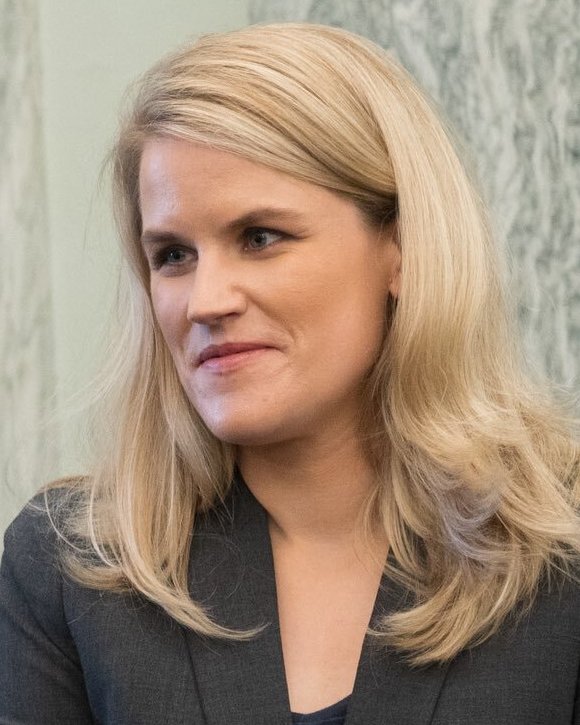 Frances Haugen is a data scientist and former Facebook employee who leaked thousands of Facebook’s internal documents to the U.S. Securities and Exchange Commission and Wall Street Journal, and famously came forward as a whistleblower on 60 Minutes in October 2021, leading to Haugen testifying before the Senate sub-committee on consumer protection.[1] During the process of coming forward as a whistleblower, Haguen developed a number of ties to left-leaning consultants and activist groups, leading to criticism from left and right-leaning figures and accusations that she was working as a “trojan horse” to allow more censorship of conservatives on social media platforms. [2]

Raised in Iowa, Haugen graduated from Olin College with a degree in Electrical and Computer Engineering and began her career at Google.[3] While at Google, Haugen earned a Master of Business Administration degree from Harvard Business School.[4]

In 2015, Haugen left Google to work as a data manager at Yelp, before she moved to Pinterest, and was eventually recruited by Facebook in 2018.[5] When approached by recruiters, Haugen reportedly asked for a job “related to Democracy and the spread of false information” and was hired as a product manager in Facebook’s civic integrity department.[6] In an interview with the Wall Street Journal, Haugen claimed that she sought the position because in 2014 one of her friendships had collapsed after her friend “became obsessed with online forums touting conspiracy theories about dark forces manipulating politics.”[7]

Haugen worked at Facebook until May 2021, when she quit her position and became a whistleblower. Haugen reached out to Whistleblower Aid, a law firm that specializes in representing whistleblowers, and met with Senators Richard Blumenthal (D-CT) and Senator Marsha Blackburn (R-TN) before leaking information to the public.[8]

Haugen began to leak documents, which became known as the “Facebook Files,” to the Wall Street Journal in September 2021. The documents contained details of Facebook’s internal reviews of the platform’s impact on young people, and its handling of content related to vaccine information, human trafficking, drug use, eating disorders, and other topics.[9] The articles prompted the Senate sub-committee on consumer protection to schedule a hearing with Antigone Davis, Facebook’s global head of safety, for September 30, 2021.[10]

On October 3, 2021, Haugen came forward publicly as the whistleblower on CBS News’ 60 Minutes, to be interviewed by Scott Pelley, a veteran left-leaning reporter and news anchor known for his opposition to the Trump administration. During the interview, Haugen called for more censorship and government oversight of the platform, claiming that “Facebook in its current form is dangerous … It may become necessary to get the public involved.” [11]

Haugen also claimed that Facebook was misleading its shareholders because, despite its promises to police “misinformation” and “hate” on its platform, Haugen suggested that Facebook’s user interface algorithms still promoted harmful content. “There were conflicts of interest between what was good for the public and what was good for Facebook. And Facebook, over and over again, chose to optimize for its own interests, like making more money,” Haugen claimed.[12] Haugen’s lawyers filed several complaints with the Securities and Exchange Commission but declined to share documents with the Federal Trade Commission, which had filed an anti-trust lawsuit against Facebook.[13]

During the interview Haugen also claimed that Facebook had played a role in the January 6, 2021, riot at the Capitol because after the election it had turned off censorship measures which it had implemented during the election cycle to limit “misinformation.” Haugen also spoke about the effect Facebook was having in other countries, including India, where Haugen claimed the platform was encouraging hatred towards Muslim people.

On October 5, 2021, Haugen provided testimony before the Senate sub-committee on consumer protection. During her testimony Haugen called for more censorship on the platform claiming that Facebook has not done enough to restrict what is said and posted, and that “The result has been more division, more harm, more lies, more threats and more combat. In some cases, this dangerous online talk has led to actual violence that harms and even kills people.” Haugen also claimed that Facebook “intentionally hides vital information from the public, from the U.S. government, and from governments around the world.”[14]

After Haguen made herself known to the public, left-leaning persons and organizations quickly rallied around her criticism of the tech giant, causing may to suspect collusion between Haguen and Democratic leadership.

Reports surfaced that former Obama administration deputy press secretary, Bill Burton, and his consulting firm, Bryson Gillette, were working as Haguen’s strategic communications guides. Whitehouse press secretary, Jen Psaki, had also previously worked for the firm. Burton was also the founder of the democratic super PAC, Priorities USA Action, and is on the board of the nonprofit, Center for Humane Technology (CHT). [15]

CHT was founded in 2018 in an effort to curb big tech companies and to hold them responsible for their negative effects on politics and society. The organization produced the 2020 documentary, “The Social Dilemma” to illustrate how companies like Facebook use unethical practices to keep consumers hooked on it’s product. Facebook cofounder and former New Republic owner, Chris Hughes sits on the board at CHT. Furthermore, the organization is funded by George Soros‘s Open Society Foundations, the Ford Foundation, and the Robert Wood Johnson foundation. Haugen appeared on the CHT’s podcast within days of appearing on 60 Minutes, prompting skepticism from many.[16]

Larry Lessig, a Harvard constitutional law professor and former Democratic presidential candidate, stated that he is giving Haugen pro bono legal and communications aid. However, Lessig is not Haugen’s main lawyer as she already receives legal help from Whistleblower Aid.[17]

In Europe, eBay founder and billionaire tech-critic, Pierre Omidyar, and his philanthropic organization, Luminate, funded communications for Haugen in the European sphere. Ben Scott, a former tech advisor for Hillary Clinton, was hired, through Luminate, to help Haguen. Omidyar has also supplied funding for the previously mentioned Whistleblower Aid and CHT.[18]