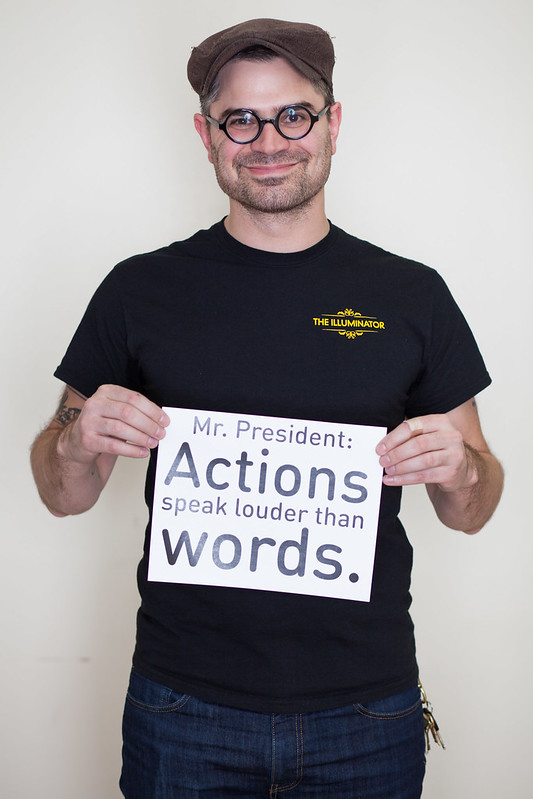 Farhad Ebrahimi is a left-wing political activist, supporter of the radical Occupy Wall Street demonstrations, advocacy donor, and founder of the Chorus Foundation. He is also a board member of the Democracy Alliance, a network of wealthy donors bankrolling Democratic campaigns and left-of-center advocacy organizations.

Ebrahimi is the son of Farhad “Fred” Ebrahimi, the former co-owner and CEO of the software company Quark founded by left-of-center political donor Tim Gill. Fred gave his son what Inside Philanthropy called “a chunk of the family’s assets.” [1]

Farhad Ebrahimi is the founder and chairman of the Chorus Foundation, a left-wing grantmaking organization.

He sits on the board of directors for the Democracy Alliance, which promotes Democratic political campaigns and left-of-center advocacy. He also serves on the boards of Wildfire Project, Solidaire, and Citizen Engagement Lab. [2]

Ebrahimi’s father was co-owner of the software company Quark. [3] A resident of Brooklyn, he was given a fortune from his father while a teenager. [4]

He is a first-generation Iranian American and grew up in a home where his parents frequently talked about politics. He has attributed his love for punk rock music and subversive art in defining his political trajectory. [5]

He graduated from the Massachusetts Institute of Technology in 2002 with a bachelor’s degree in mathematics and computer science. [6]

After establishing the Chorus Foundation in 2007, he said he learned, “the fundamental challenge of climate change isn’t identifying the best policy or the most promising technology or the scariest science. It’s generating the political will to enact the best policy, adopt the most promising technology and heed the scariest science.” [7]

He told the New York Times in 2013: “We view investments first and foremost by — Is it making the world a better place? We keep things strictly mission-focused — renewables, energy efficiency, household products that are sustainable.” [10]

Based in Boston, the Chorus Foundation’s board of directors includes his sister Sasha Ebrahimi, brother-in-law Eric Griffith, and investment manager Nina Ross. [11]

The organization advocates a transition completely away from conventional energy; it claims to do so without creating more concentration of wealth or leaving workers jobless. [12]

He once said, “Private philanthropy requires wealth inequality, and wealth inequality requires the extraction and consolidation of wealth. We must reckon with the fact that our very existence is the byproduct of systemic injustice and inequity.” [13]

On another occasion, he said: “I’m trying to create a world in which someone would not end up in my situation of having been gifted more money than I possibly know what to do with.” [14]

In 2011, he was involved in the Occupy movement and later joined protests against the Keystone XL pipeline and marched with Black Lives Matter. [15]

He also went to Eastern Kentucky, the heart of coal country, and demonstrated against coal companies. He was involved in the anti-coal group Kentuckians for the Commonwealth. [17]

In addition to serving on the Democracy Alliance’s board of directors, Ebrahimi is also on the alliance’s 2020 Vision Committee, which aims to raise money for liberal campaigns and causes at the state level such as environmentalist energy subsidies and minimum wage hikes. [18]