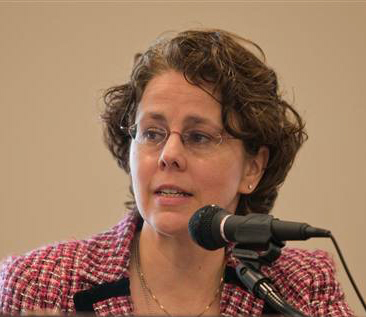 Cecilia Munoz is an American left-of-center political operative and public policy strategist who held high-ranking positions in the White House under President Barack Obama. Munoz served as the White House Director of Intergovernmental Affairs and Director of the Domestic Policy Council, and worked at the White House for the entirety of the Obama administration. [1] Munoz previously led policy and lobbying activities for the National Council of La Raza (now UnidosUS), and currently works for left-of-center non-profit New America. [2]

Prior to joining the Obama Administration, Munoz had a long history with liberal advocacy. She worked for the National Council of La Raza (NCLR, now known as UnidosUS) for over 20 years, and leading the Council’s lobbying and advocacy efforts. UnidosUs is well known for its liberal expansionist stances on immigration policy and is often critical of many Democratic politicians for insufficient support of expanded immigration and legal status for illegal immigrants. [3]

Munoz has long been a fixture in left-leaning circles and organizations, having served as board chair of the Center for Community Change and as a board member of George Soros’s Open Society Institute and the Atlantic Philanthropies founded by left-of-center duty-free-store magnate Charles Feeney. Munoz was awarded a MacArthur Foundation fellowship in 2000, receiving a $500,000 prize for her work on immigration advocacy and in recognition of her work at the National Council of La Raza. [4]

Following the 2008 Presidential election, Munoz was offered the position of White House Director of Intergovernmental Affairs in the incoming Obama administration. Initially declining the offer, she accepted after Obama called her to make a personal appeal for her to take the position. She served as intergovernmental affairs director for three years, running the office that coordinates with state and local governments as well as private sector interests. In 2012, Munoz took over as Director of the White House Domestic Policy Council, which oversees all domestic policy for the administration. [5]

Munoz took criticism from many activists and former allies when she joined the Obama administration, and ultimately defended many of the Obama-era immigration policies that became controversial, and that Munoz would have fought against in her prior role as an activist and senior leader at the National Council of La Raza. Munoz stated that the unaccompanied children crisis in 2014 made that “the hardest summer of her life.” [7]

Munoz also drew criticism from liberal immigration activists for defending the deportation policies of the Obama administration. In a 2011 documentary, Munoz defended a ramping up of deportation stating that laws need to be enforced even if they are “broken” and that the government had an obligation to deport 400,000 people per year, as Congress had budgeted. In response, a far-left activist group for expanded immigration called Presente.org started a petition stating that Munoz “used to be a champion for immigrant rights. Now she is the main defender of failed programs.” [8]