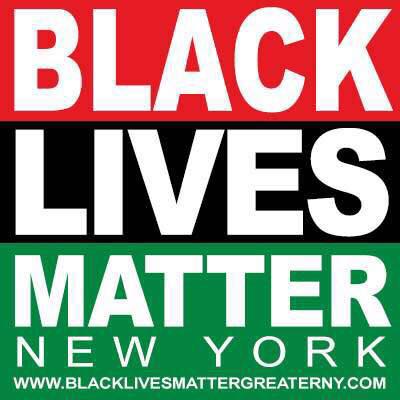 Black Lives Matter of Greater New York is a direct-action protest organization that claims to support the liberation of the black community from racist oppression. The organization is not affiliated with the official Black Lives Matter (BLM) movement and instead operates as an independent path from the national movement. Its leaders have been frequently profiled in the media and have reached out to constituencies as different as supporters of President Donald Trump[1] to chapters of the far-left Democratic Socialists of America.

Black Lives Matter of Greater New York became active in 2016. It has a reputation for being more direct-action and confrontation-oriented than other BLM chapters and organizations.

In February 2017, New York City Police Department officers arrested Newsome while he was protesting against the Trump administration’s travel ban on several predominately Muslim countries. Newsome claims that he was nearly killed during the arrest. All charges were dropped.[2]

In June 2017, Newsome and his organization protested the verdict acquitting Jeronimo Yanez, a Minnesota police officer who shot black concealed carry holder Philando Castile to death. During the march, Newsome told a reporter at the New York Observer that the United States “lynched another black man.”[3]

In June 2018, Newsome was arrested in a scuffle with New York City police during a protest. He claims that an officer hit him with a bicycle.[4]

In July 2017, organization members were involved in a counter-protest of a neo-Nazi march in Charlottesville.[5] In September 2017, Newsome and members protested a pro-Trump rally on the National Mall in Washington D.C. In a twist of events, rally organizers allowed Newsome and some members of his organization to take the stage and address attendees. Newsome and his organization were denounced by the official Black Lives Matter organization for accepting the invitation.[6]

March for Our Lives

On June 24, 2020, Newsome remarked in an interview with Fox News that “if this country doesn’t give us what we want, then we will burn down this system and replace it. All right? And I could be speaking figuratively. I could be speaking literally. It’s a matter of interpretation.”[8]

In September 2021, Black Lives Matter of Greater New York organized protests outside the Italian restaurant, Carmine’s, over an alleged incident of racial profiling by restaurant staff. [9] According to protestors, a hostess removed three black women, who were visiting New York from Texas, from the restaurant after accusing them of having fake COVID-19 vaccination cards. Proof of COVID-19 vaccination became required for entry into any restaurant in New York City during 2021 as a result of a highly controversial policy implemented by Mayor Bill DeBlasio. [10]

The confrontation led to a brawl between the women and staff outside the restaurant. Surveillance footage released by the restaurant following the protests revealed that it was one of the women that had instigated the fight by throwing the first punch. [11] One of the female diners also alleged that the hostess used a racial slur against the women, which the restaurant’s owner “unequivocally denied.” [12]

At the protests, Black Lives Matter of Greater New York’s co-founder, Chivona Newsom argued that the hostess had used the vaccine card as an excuse for racial prejudice, saying “We’re putting this city on notice, that your mandate will not be another racist social-distance practice. Black people are not going to stand by, or you will see another uprising. And that is not a threat; that is a promise. The vaccination passport is not a free passport to racism.” [13]

Chivona Newsome, also made broader statements against the policy of vaccination mandates, saying “Seventy-two percent of black people in this city from ages 18 to 44 are unvaccinated. So what is going to stop the Gestapo, I mean the NYPD, from rounding up black people, from snatching them off the train, off the bus?” [14]